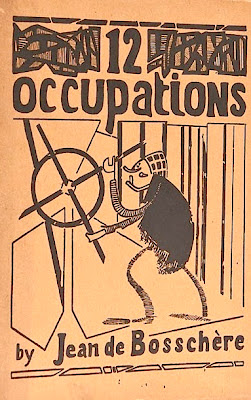 Collectors of early modernist literature are well aware of the rarest of Ezra Pound’s first experimental ‘ imagist ‘ poetry (Lustra, A Quinzaine For this Yule etc ). But this little pamphlet, a translation of an early work by the Belgium poet and artist Jean de Bosschere  is so scarce that it doesn’t even get a mention in The Young Genius, 1885 – 1920 (2007),David Moody’s monumental first volume,. Nor does it feature in other collections of letters from Pound. However, in the recently published letters to his parents, De Bosschere’s name does crop up several times, though I cannot find a mention of 12 Occupations. Did the translator see it as mere hackwork done to pay the rent of his bedsitter in Kensington ? It seems possible. He must have done a good deal of this sort of thing at the time.

Pound was a famous talent-spotter and De Bosschere was just the sort of multi-talented. artist/writer that he would have nurtured. Having, in 1900 graduated from art college in Antwerp, De Bosschere  paid several visits between 1901 and 1905 to Paris, where he met writers interested in the occult. From 1905 he seems to have supported himself as an art critic until the outbreak of the First World War, and during this period became an admirer of symbolism and of the mystic Catholic writer Paul Claudel. In 1915 he fled the Great War for London where he met, not only Pound, but also fellow Imagist poets like Richard Aldington and John Gould Fletcher, as well as  D.H. Lawrence and Aldous Huxley. His own first collection of poetry ( Beale- Gryne ) had appeared  in 1909 and he continued to write poetry and novels throughout his life, although possibly because most of the latter were seriously weird,  they remained unpublished at his death.

Knowing that Pound was the go-to man in London, the Belgium showed him his work( presumably both his writings and drawings )in 1916. At first, Pound didn’t know what to make of it. , but felt ‘there was something or other figiting around in his carcass, trying to get out in expression‘. De Bosschere himself was a great admirer of the drawings of Lewis and Gaudier.

Pound did however submit the Belgium’s  verse to Poetry and De Bosschere in turn wrote a critique of Pound for The Egoist. In 1917 De Bosschere’s persistence was rewarded when he received a three year contract to illustrate books for Heinemann, including works by Ovid and Wilde.In the following year Pound reported that an exhibition of De Bosschere’s paintings  was coming on in the West End. By 1920 Pound had become a great admirer of his  graphic art and the two men met occasionally in Paris.

De Bosschere’s first novel, Dolorine et les Ombres (1911), had provoked charges of Satanism, and indeed he later gave himself the nickname ‘ Satan ‘.However, the black and white illustrations for 12 Occupations seem more ‘ dark ‘than satanic. One illustration shows a strange bug- like creature turning a machine-tool wheel. In another, a man appears to be operating a contraption for hanging miscreants on the gallows. The accompanying descriptions in French  are strongly declamatory in tone and the  translations are admirably Poundian. Here is a fragment from ‘The Chair and Table-Maker’:

The chair-maker has democratized the throne…
By means of the table, he brings the food half-way to our mouths. For the table is the first floor of the earth, as heaven is its garret.
Oh, admirable work of this man, which delivers the featherless biped from the animality which lives on the earth.
The Greek has not done better for our sublimity.

God knows what Pound thought of the whole undertaking, though no doubt he was glad of the money. For some reason, his name does not appear anywhere in the book, but I doubt if he minded. There is no mention in his letters home of any fee, nor how well the little book sold.

Although 12 Occupations has always been regarded as a rarity in America and the UK, in Europe they get far less excited about it. In 2006 a copy appeared at auction in France with an estimate of 20/50 Euros. In February 2012 Bloomsbury sold a similar copy for £260. The 12 Occupations currently with Peter Harrington at an eye watering £2,250 is signed by the author, who has also hand coloured some of the illustrations. Oddly, on 11 Oct 2012 at Swann Auctions in NYC a dummy version, possibly from the publishers’ archives, made $3120 with a copy of the trade edition. The latter may be the one that Zubal are offering, because it wasn’t there when I first looked a year or so ago. 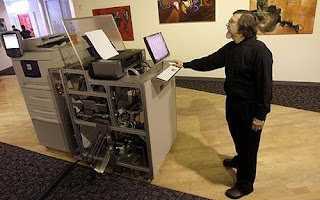