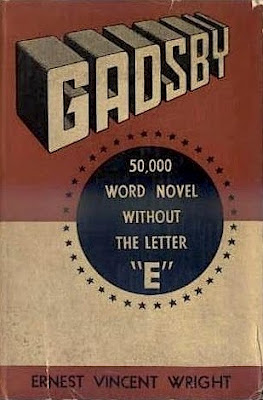 After surfboards and Booker novels something truly odd and rather rare. When I first came into the trade (around the time when Sweet were singing 'Ballroom Blitz' and footballers had long sideburns) a lot of people wanted strange and odd books, the more outlandish the better - now they all want 'The Man with the Golden Gun' and they want look under the wrapper to see if the embossed gilt gun is there. * Sic transit gloria mundi. However all is not lost, a veritable barmy army want Gadsby...


EXPERIMENTAL FICTION / ODDBALLIANA
A literary curiosity and a legendary rarity. Much sought after. The author E.V. Wright (1872-1939) wrote Gadsby in five and a half months, on a typewriter with the e tied down, "so that none of that vowel might slip in, accidentally". He finished his work about the middle of February 1937, and the typescript was illustrated in The Los Angeles times on 24 March. After seeking a publisher for 2 years Wright finally settled on a vanity press in LA. It is said that the publication of Gadsby coincided exactly with the author's death on 7 October 1939; however a copy is known with an inscription dated two months earlier and the copyright-deposit copy was received five months later. From the introduction:

"People as a rule will not stop to realize what a task such an attempt actually is. As I wrote along, in long-hand at first, a whole army of little E's gathered around my desk, all eagerly expecting to be called upon. But gradually as they saw me writing on and on, without even noticing them, they grew uneasy; and, with excited whisperings amongst themselves, began hopping up and riding on my pen, looking down constantly for a chance to drop off into some word; for all the world like seabirds perched, watching for a passing fish! But when they saw that I had covered 138 pages of typewriter size paper, they slid onto the floor, walking sadly away, arm in arm; but shouting back: "You certainly must have a hodge-podge of a yarn there without *us*! Why, man! We are in every story ever written *hundreds of thousands of times! This is the first time we ever were shut out!.."

A book much admired by the Pataphysicians and Oulipans esp Perec and Queneau who both searched for copies. The rarity is due to one of those warehouse fires that so frequently occur in the history of unfindable books (Nabokov's Despair, Beckett's Murphy, Moby Dick and Forster's Alexandria to name a few -- enemy action is also a great rarity creator...) Wetzel's novelty warehouse went up in a mighty blaze (a fireman died) along with most copies of the ill fated novel, it was never reviewed and only kept alive by the efforts of a few avant garde French intellos and assorted connoisseurs of the odd, weird and zany. It has been reprinted this century. Perec, of course,also wrote an e-less book 'La Disparition' (Paris 1969). Possibly in honour of Gadsby it was also 50,000 words. These books with grammatical restrictions are now known aa 'Lipograms'. Perec's work was translated into English sans e's as "A Void' by the brave Gilbert Adair.

VALUE? 'Gadsby' first editions occasionally surface, seldom in sparkling condition and for jacketless copies dealers tend to try for about $4000 to $5000, less for ropy ones. A reasonable jacketless first sold in early 2006 for $3000. An unpleasant sounding defective copy is listed at £850, signed by the author's sister. A nice copy wearing jacket might go ballistic but interest in such curiosities tends to be among persons unburdened with large amounts of cash, so who knows?

*In re the golden gun under the d/w: Mostly it is not present because the printers ran into production problems but it is said 400 got through with the embossed golden gun on the cover and it can add a £2000 or more to the price, good hunting!
Posted by Bookride at 2/24/2007

You is right. I hold no cash for this book but I want it. I must buy a copy that is in print again. How hard it is to say things without an E!

No you cannot say that writing without that thing is not hard my old companion and you should try it. You cannot blog without difficulty although 50000 words might restrict you.And you sound similar to an idiot on a small island, eeek!

you should have used limit instead of restrict :)

I have heard about this book before but never searched on the internet. Now I finally found this rare piece mentioned online :D A full novel without "E" must be very boring.

So what word of the human body has not the letter E?

The original Wetzel edition is now available at the Internet Archive (sans the Modernist cover).

Or you can look for it at Amazon's Kindle Store (complete with a behind-the-scenes essay, Skipping Fifth).