SHORT STORIES / CLASSIC LITERATURE
Hector Hugh Munro, or' Saki' wrote most of his best work for newspapers such as the Westminster Gazette, Daily Express, Bystander, Morning Post and Outlook. A master of the short story, he takes us into a vanished and jaded world of upper class rural and metropolitan life in England (and Europe) before WW1. Christopher Morley writes that Saki provides one an excellent introduction to "the mysterious jungles of English humour, a savage country with birds of unexpected plumage."

A sample Saki witticism, oddly topical - 'We all know that Prime Ministers are wedded to the truth, but like other wedded couples they sometimes live apart.' Another apercu brings that era into focus- 'To be clever in the afternoon argues that one is dining nowhere in the evening.' Others include '...good gracious, you've got to educate him first. You can't expect a boy to be vicious till he's been to a good school...' and (useful for writers)- 'A little inaccuracy sometimes saves tons of explanation.' His witticisms are sometimes dismissed as being sub Wildean and some ('Beauty is only sin deep...') seem a little strained these days.

He was born in Akyab, Burma on the 18th of December 1870, and was killed by a sniper on the 16th of November 1916, near Beaumont-Hamel, France. In Burma he raised a tiger cub and was always intereted in wild creatures. He was also a historian, travel writer, political satirist and author of novels and plays. His pen-name Saki (used for stories, skits and satires) was taken from the Sufi poet Hafiz, who addressed several of his verses to a saki, or cupbearer. His complete short stories can be found in one small fat volume at modest prices.

A recent Channel 4 documentary on his life featured celebs talking about him - Will Self, Alexi Sayle and Jeffrey Archer. Self was as, always, incisive and made you want to re-read some of the stories (Sredni Vashtar, Tobermory) - he called Saki a 'shapeshifter' - possibly a reference to Saki's gay side. Then seeing Archer praise Saki made one wonder whether Saki was that good - his presence, as always, diminished the programme. Saki would not have liked Archer. It seems odd that they used him- but in our fallen times any celebrity will do--if David Gest had ever read Saki they would have had him on too.

'Chronicles of Clovis' is one of his more attractive books but is not scarce, there are usually a few firsts at ABE. Beautiful copies are less common, jackets are rare and valuable, in fact, I have never heard of one. 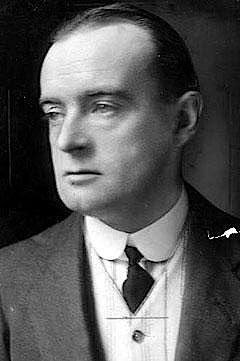 VALUE? A sharp copy can he had at less than £200. None of his books are especially scarce. Almost all are in Bleiler as the stories occasionally have fantasy elements including werewolves ('Gabriel Ernest.') His 1913 future war novel 'When William Came' is listed in Clarke's 'Tale of the Future' with the following note -"The best of all the 'German Invasion' stories; a merciless and very effective analysis of moral, social and military weaknesses." It goes for about £200 in very nice shape but is not scarce. Auction records reveal the following:

With the premium probably equivalent to £2500 and in today's money say £4500. It still doesn't seem enough; however compared to, say, Hemingway or Waugh or even Sassoon, he is minor and will surely stay minor. However he is known throughout the reading world and will always be admired, read and wanted.

There are a handful of serious collectors -now mostly looking for manuscript material. Saki only gets serious money when you find presentation copies. They do show up (we have had 2 in the last 10 years) and he usually signs as H.H. Munro. Early jackets would also turbo charge prices. Saki is big in Russia, where he spent some time as a reporter, and there are several websites in Cyrillic devoted to him.

Outlook?
Undramatic and probably not rising or even tracking inflation. If someone like JK Rowling or Sarah Jessica Parker said he was their bedtime reading prices might perk up. Unlikely and no matter- at least the feisty Christopher Hitchens wrote a good piece on him in Atlantic Monthly June 2008. Thanks to the reader who pointed out that the cove below is not Saki. It was used as the cover of a Penguin and is possibly supposed to evoke the period and even the character of Clovis. Right on! Saki is immortal

There's an animated, illustrated version of Tobermory at:
http://www.adamsmithacademy.org/etext/Tobermory.html

Interesting article somewhat challenged by the fact that the photograph is not of Munro.