Musings on the market for autographed letters... 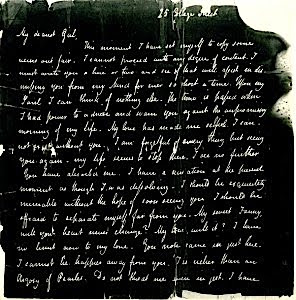 Apparently autograph collecting as a hobby goes back as far as the 1780s, and the sheer number of letters that have survived from this date and slightly earlier—compared with the small number dating up to this period would suggest as much.
However, most letters in the catalogues of modern manuscript dealers seem to date from around 1840 onwards —which suggests that the hobby must have begun to really take off soon after this date. It is surely silly to argue that MPs, public officials, men of letters, churchmen, scientists, artists etc wrote fewer letters from, say, the mid 17th century to the mid eighteenth century and many more from the accession of Queen Victoria. People have always had to keep in touch. In fact, it could be argued that letter writers should have been more prolific in earlier times for the simple fact that before the age of the telegraph, the telephone, the train and the fast coach, there were no alternatives to the letter.

Of course, the arrival of the Penny Post in 1840 did make the sending of letters cheaper and more convenient—but this doesn’t really explain why so many letters have survived from this date. After all, with more letters around there were more to throw away. The only explanation as I see it is that after a certain date more people began to keep letters---perhaps due to the cult of the celebrity, which began to flourish following the accession of the young and glamorous Queen Victoria, and grew stronger as the century wore on , thus strengthening the market for letters. I have seen a number of albums of letters and cut-out signatures (sometimes assembled with a collection of crests) which appear to date from the mid nineteenth century.

Certainly there were autograph dealers in the mid Victorian period (I have an envelope bearing the name and address of one of them) and there are letters replying to requests from autograph hunters from Victorian celebs (who were often soldiers, politicians and other public figures). Occasionally, a celeb might donate a letter or an autograph received from a more famous celeb (I have a letter indicating that the signature of Tolstoy, which the sender had asked for, had been enclosed), which for some reason the donor no longer wished to keep. There are perhaps grounds for supposing that , say , someone like a cabinet minister or a general might see such autograph hunting by the hoi polloi as a bit infra dig , but worth encouraging for its positive public relations value. A more recent example for me was a letter from Hugh Gaitskell to my uncle, Denis Healey, willingly given to me by Denis when I was aged 11, which was claimed back almost immediately after Gaitskell suddenly died. It would be nice to know if something similar occurred in the Victorian or Edwardian period.

Perhaps many of the letters that come onto the market today are letters from others to the celeb that have been donated by celebs to collectors. Otherwise, unless there were many dealers in autographs and sales of autographs, how did these letters, many of which bear on matters often weightier than a request by a collector for a signature, come onto the market? Or it is equally possible that the ‘I can’t come to tea ‘letters (as I call them) were kept by admirers who knew the celeb professionally or personally, but at a low level. On the other hand, it is hard to believe that important letters would have been surrendered to a collector by the celeb recipient. It is more likely that such letters would have been kept by the recipient and to have remained alongside other important papers at his or her death-- to be sold off to book and autograph dealers, or sent to auction.
[R. M. Healey]

Many thanks Robin
I once had a 'clipped' signature of John Keats in an old album -it read something like 'yours faithfully John Keats' and I wondered about the letter that it had been clipped from-- was it to Mary Shelley suggesting a fantastical character or to Byron swapping anecdotes of conquests? Or merely another 'can't come to tea' note...? Certainly it was a bloody sight more valuable than the clipping. Damn these early autograph hounds...

By the way the letter above is a Keats forgery by Major George de Luna Byron (ca. 1810-1882). He claimed to be the natural son of the Lord George Gordon Byron by a Spanish countess and was quite successful at penning and selling off fake letters of Byron, Shelley and Keats in the mid-nineteenth century. His forgeries are collected but they are worth a fraction of the real thing and cause much disappointment when unmasked. Below is a genuine Bruce Lee letter offering good advice to a young girl fan. 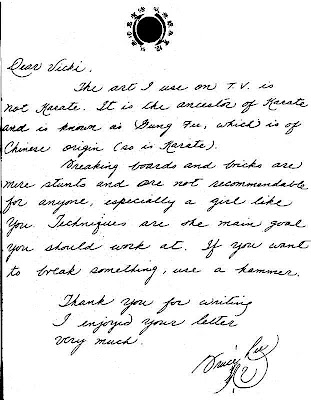 It's lovely to find something by the author in a book. I picked up a Mary Stewart novel - Wildfire at Midnight- because it was set in Skye and lo there was a postcard inside the book from Mary Stewart - mentioning Skye.

Agree about clipping autographs - a barbaric soulless practice. You see these things on ebay - a portrait of Diana say, merged with a clipped signature. Yuck.

Yus indeed Edwin. Yuck indeed. Those mounted photos with clipped signatures. Heritage when they were on Melrose in LA had a ton of them and seemed to be able to shift them to their moneyed but taste challenged customers. Such stuff is all ove Ebay now. Follow the money. Are these things going up or down? If up maybe we are missing a trick! N