Ralph Chubb (1892 - 1960) has been called a modern day William Blake, partly because most of his books were exquisitely hand printed in tiny editions, some of which were hand coloured by the artist,  and partly because he is seen as an anti-science, visionary Utopian whose principal theme was the redemption of  Albion. Unlike Blake, he was a solipsist who placed himself at the centre of a mythology in which golden lads in their teens, cavort through endless sunny afternoons in an earthly  paradise of prepubescent innocence. While Chubb’s Uranian verse drew inspiration from people like Walt Whitman, his paintings, many of which are now in public collections, suggest that the painter of naked youth, Henry Scott Tuke, was also an influence.

Chubb is a genuine maverick ---an isolated figure in twentieth century English art, but there is a strong demand for his best work from a devoted, even fanatical, following. An early book, The Sun Spirit, is currently available at $7,500. One avid collector, the Oscar-winning, swinging sixties cinematographer, David Watkin ( The Knack, Help, The Bed Sitting Room ),who died in 2008, owned a number of Chubb titles. 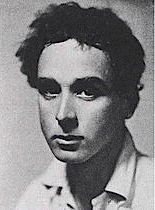 One of the few interesting people to have been born in Harpenden, Chubb moved from the town to nearby St Albans while still a baby and became a pupil (Stephen Hawkin was a later product ), at St Albans School before going up  to Selwyn College, Cambridge in 1910. At the outbreak of war he served as an officer with distinction, before being invalided out. In 1919 the army, it would seem, paid for him to attend the Slade School of Art, where he met the print-maker Leon Underwood. His family, who by then were living in Curridge, Berkshire, encouraged him to exhibit his paintings, built a press for him, and a sister helped him get a job as an art teacher in a local school.

Throughout the twenties Chubb produced a string of publications, three of which were commercially printed. One of these, The Book of God’s Madness, explored Manichean ideas reminiscent of Blake. Towards the end of the decade Chubb’s Uranian activities, both in Hampshire and in London, caused a scandal in his village and he was forced to resign from his teaching post. He and his family moved and made their new home at Fair Oak Cottage, among the woods near Ashford Hill, east of Kingsclere.  In 1929 Chubb was emboldened to publish his sexual manifesto, An Appendix, using a crude duplicating machine. Soon afterwards he acquired a lithographic press, which he continued using until his death. Like Blake before him, he was now able to integrate drawings and text and publish his controversial work without fear of editorial interference.

Partly  because of the Uranian content of these publications, partly because the editions were so miniscule, Chubb has never been  regarded as a ‘ fine printer ‘ in the tradition of the Doves Press, Gregynog, and the rest, but was seen more of a visionary and polemicist who happened to work in this exclusive field. His refusal to curb his sexual politics meant that he lived in poverty for most of his working life. His books were hardly money-spinners and his paintings, though praised, lacked the appeal of those by Henry Scott Tuke, and did not sell. Working in his shed studio on the edge of Benskins Wood, haunted by an idyllic childhood and becoming more paranoiac by the year, he ploughed a lonely furrow in the immediate post-war world. During his final years he donated many of his books to the national libraries of the UK. 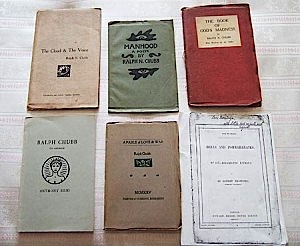 Chubb may have seen his final project, The Golden City, which contains some of his most engaging poetry, as a possible commercial success, and therefore kept its boy-love content to the minimum. Unfortunately, he did not live to see it finished. At his death in 1960 only the graphic element of the book had been completed, and it was left to his devoted sister Muriel to engage a professional lithographer to complete the printing of the title page, table of contents and colophon. The edition of only 18 copies were then bound by Sangorski and Sutcliffe and dispersed to various interested parties.  Today, only five copies are known to exist outside public collections, and these are the uncoloured ones. In fact, The Golden City   is so rare that one international dealer in the genre has confessed to never having seen a copy. Other dealers only know it as a legendary ultra-rarity. In the years that followed her brother’s death Muriel also managed to get two other, far less ambitious  projects published. The Day of St Alban appeared in 1965 and this was followed by Autumn Leaves (1970). Both are more common, but less sought after than his magnum opus. Perhaps, however, they may be good bets as investments. [R. M. Healey]

Many thanks Robin. Always great to find a Chubb but sadly such finds are infrequent. Last one seen was bound in corduroy, seldom used in binding - there is not even a limited edition of Adrian Bell's 1930 book 'Corduroy' thus bound. The photo of Chubb is enigmatic - does he look bashful or haunted or possibly burning with Pater's 'hard gem-like flame'? There is a definite resemblance to the young Gene Wilder. Are they related?


Chubb's cottage is still there, though recently renovated. You can also see the workshop where he produced his very rare books.