Seeing that every branch of Waterstones is presently crammed with fat paperback reprints of the Parade’s End tetrology, now perhaps is the time for publishers to consider new editions of the less well-known titles by Ford Madox Ford. One of the contenders must be The Simple Life Ltd (1911), one of two satires with similar themes, the other being  The New Humpty Dumpty (1912 ). A reprint would certainly please members of Ford’s fast-growing band of followers. At present there is no copy of The Simple Life Ltd on ABE. Indeed, there appears only to have been one edition, and this is an ever present item on some bookseller’s wants lists.

Simple Life Ltd is still regarded as a ‘curio‘ among critics, positioned somewhere between the early fiction and poetry and the experimental, impressionistic work of Ford’s mature years. Published at a difficult period of his life, just two years after he had been displaced as editor of The Fortnightly Review, it is a satire on Utopian lifestyles, but predominantly focuses on those who corrupt the ideals of the simple-life movement  for their own gain. It features caricatures of many of those with which Ford had been associated a few years earlier, while living a simple life himself  in Pent Farm, Kent and Limpsfield, Surrey. These figures included anarchists and proto-socialists such as Kropotkin, Edward Pease and the Garnetts. The frequently abrasive satire at the expense of many of his former friends may explain why Ford chose to write under the pseudonym Daniel Chaucer, which he continued to use for The New Humpty Dumpty.
The straight-forward plot of the novel revolves around the lives of a group of Simple-Lifers (as they are called throughout the book) who, led by the charismatic Simon Bransdon ( a thinly disguised version of Joseph Conrad) settle in cottages on land belonging to a Tory squire. Here they engage in the usual alternative pursuits of vegetarianism, abstemiousness, weaving, maypole dancing and homeopathy, while they investigate such paranormal phenomena as telepathy and thought transference. This idyllic existence begins to implode when one of the more fervent supporters of the utopian philosophy leaves the colony for university and returns as a Thoreau-like critic of the leader’s achievements, while the colony’s administrator is first revealed as a peculator and then is shown abandoning  the colony to set up his own garden city in East Croydon.
In the end the settlement is destroyed by fire—an appropriately symbolic end for a social experiment that carries within it the seeds of its own destruction.

The Simple Life Limited is interesting from a historical perspective. While it was being written physically threatening anarchist activity (such as the Sydney Street Siege) was continuing in London side by side with the peaceful Garden City movement, which, initiated principally by the Quaker Ebenezer Howard, had borne its first fruit with the establishment in 1903 of Letchworth Garden City. Ford could hardly have been unaware of the ideals of Howard and his disciples and if he visited Letchworth may have noticed that these principles when turned into bricks and mortar did not always benefit those who most deserved to be rewarded. Today, it is ironic to discover that  some of the ‘ early ‘houses in ‘ the World’s First Garden City ‘,though originally built as ‘ affordable ‘ alternatives to the insalubrious terraces of  industrial cities, are now  among the most expensive homes in Hertfordshire, and as such  well beyond the pockets of today’s simple-lifer .

The recent TV-induced surge in the popularity of Ford doesn’t seem to have affected his online values much, if at all. Most firsts, of his many works in fiction and non-fiction come in at under £20, some at under £15. Such low prices are probably a reflection of his high productivity and the necessarily uneven quality of his output, which amounted to, on average, a book a year. Even early editions of the Parades End tetrology aren’t expensive. The exceptions are his ‘masterpiece‘, the Good Soldier (1915), which is online at £2,500, and the two satires, The Simple Life Limited and The New Humpty Dumpty—the latter being of particular interest to those studying the history of socialism and environmentalism. 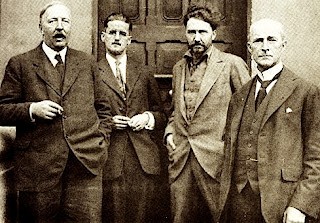 I would to thank Nathan Waddell of the University of Nottingham for allowing me to see the whole of his article on The Simple Life Limited. [R. M. Healey]

Many thanks Robin. £300 might be cautious for a very sharp copy and in a d/j it would be thrice that. 'Good Soldier' - his masterpiece and a Connolly 100 is, as we have noted, a £10000 book in a jacket. I enjoyed the recent Hueffer fest on the BBC - there are some echoes of 'Simple Life' in the Wannup family. The late Peter Howard had a bunch of early jacketed FMF's he would take to fairs for many a year, oddly they were not subject to his usual very deep discounts...

Above is Ford with Joyce and Pound, the unassuming party on the right is John Quinn, lawyer to the Modernists. His literature collection, sold in 1924 was probably the most desirable of the last 100 years. He owned most of Joseph Conrad’s major manuscripts,  the manuscript of Joyce’s 'Ulysses', Synge’s manuscript of 'The Playboy of the Western World', Eliot’s 'Waste Land' and much of Yeats’ best work in manuscript. Those lawyers...

Another dull "what I paid for it in the 70's" comment. In this instance, a first of "Good Soldier", no dust-wrapper, but inscribed by Ford to Violet Hunt in March, 1915; the inscription incorporating the phrase "the saddest story", Ford's intended title for the book. £75, from a dealer then in business in Cecil Court, bought for a library for which I worked at the time.

L-B That actually is the saddest story. Violet Hunt is practically the dedicatee. That copy has probably gone up 100 times since the 70s. Still £75 was a night at the Ritz back then! Thanks for the input. N