Adam Smith, An Enquiry into the Nature and Origin of the Wealth of Nations (London, W. Strahan and Cadell; 2 vols, 1776 )

Just as every natural scientist covets a first of The Origin of Species, many city bankers would love to find a copy of The Wealth of Nations, now generally recognised to be one of the most influential books ever published. A first edition would be nice, and such a book, if one could be found, would hardly stretch the finances of your average hedge fund manager. I remember my old paymaster at Rare, Bernie Shapero making a very early Wealth of Nations the star turn in a collection of works on economics that he was trying to sell a few years ago. I even remember wondering at the promotional drinks party whether one of the treasured volumes might get nicked. However, I ‘m not entirely sure whether the book in question was an actual first edition. You can say goodbye to £100,000 if you want one of these. Currently, there is one on line, appropriately, in Beverley Hills. And in Pennsylvania there is a second edition for £60,000.

Apparently, all copies of the first edition were sold within six months and Smith spent some of 1777 incorporating important emendations in  a second edition, which appeared in 1778 and  is now ( rather oddly ) scarcer (at 500 copies ),according to the Pennsylvania dealer, than the first. Other editions followed, some published in the newly empowered USA. As Smith died in 1790, editions which appeared after this date lack the glamour, or indeed significance, of the early editions, but they still go for three figures. Were I buying an eighteenth century edition I’d go for one with interesting marginalia and crossings out from the hand of a prominent businessman of the Industrial Revolution.

Unlike some of the rarest first editions of his Bloomsbury pals, the great economist’s first book is not a sexy title. It is a rather dry treatise on economics which is now so pricey that only a completist Bloomsburyite with long pockets would afford a copy. It is more likely to appeal to admirers of Keynes the economist, since it is the first hint of the direction in which the great man was to go with his radical theories regarding the necessity of government intervention in fiscal affairs 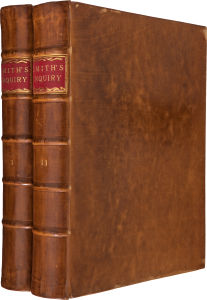 Keynes, like many a spoilt child of wealthy late Victorian parents, had a comparatively easy ride financially up to his late twenties. After graduating from Cambridge in maths he received a generous ‘allowance’ which enabled him to follow his intellectual bent without the fear of falling into debt. Even when, in 1906, he was able to earn money for himself as a Clerk in the India Office he still continued to receive an allowance. His exposure to colonial economics resulted in Indian Currency and Finance, which was published while Keynes was a recently elected Fellow of King’s College. In this treatise Keynes addressed the problem of the rupee and its relation to its exchange value in silver and gold. He argued that as long as the unit of current had no intrinsic worth in relation to gold it would be vulnerable to international market fluctuations. A return to the gold standard, however, would guarantee the stability of the Indian economy, particularly regarding exports. Thus instead of letting the free market determine the future worth of the rupee, the Government had a duty to step in whenever necessary with a fiscal policy for India that would safeguard the currency in relation to world trade.

This was a distinctly radical theory in 1913 and Keynes was strongly opposed by free-marketeers. However, his talents were recognised by government economists and the book earned him a seat on the Royal Commission on Indian Finance and Currency. Only in the thirties, however, were his ideas on government intervention recognised as a possible alternative solution to the economic crisis then gripping the nation.

Perhaps sensing that his writings were likely to prove popular in the future Keynes  persuaded Macmillan to share profits from Indian Currency and future works on a 50/50 basis. His predictions proved accurate and by 1942 over 4,000 copies had been sold, netting him £295.

Though it lacks the glamour of The Wealth of Nations, Indian Currency, without question, a spectacularly dull looking tome, might be easier to acquire among a job lot at some country auction. But if you can’t wait thirty years for such a chance find, there are a handful of copies online. These range from two ex-library books at £250 and £350, to a lovely copy in the original cloth, for which Harrington wants £1,875. [R. M. Healey]

Thanks Robin. That old Adam Smith book could almost be bought as a hedge against inflation (although at a little less than £100K). I seem to recall William Rees-Mogg (bookdealer and Times editor) setting out to prove that it out-performed the market at one time. As for Keynes years ago Indian Currency was a bit of a sleeper and I bought one from a dealer in Eastern travel, normally an ambitious pricer, at about a quarter of value. Couldn't happen any more.

I would have thought that most city bankers would be seeking out copies of The Gambler or The Biggest Game in Town?
Meow.