VICTORIAN FICTION / ABSINTHE/ MELODRAMA
I was thinking about Marie Corelli recently because I had a request for stock from someone setting up a bookshop in Nigeria. He wanted biographies of great men -Einstein, Churchill and Bill Gates were mentioned, popular fiction esp Puzo, Dan and Sandra Brown, Sheldon, Nora Roberts, Silhouette books and the great Ludlum. However top of the list and most wanted was Marie Corelli ( ' We would not mind any quantity of books/fiction under Maria Corelli, particularly, “The Sorrows of Satan” '). I wrote back saying I couldn't help much, but advised a buying trip to our shores. Nigeria is a bit of a no-no for the wise entrepreneur.

The interesting thing is that one has always been able to sell Marie Corelli to African readers. I had thought there was something about her writings that appealed to the African soul, but the explanation I heard one day in my shop from a teacher from Lagos is that 100 years ago Ms Corelli's books, bestsellers past their prime in Britain, were dumped on the continent. There is even a fable of a shipwreck full of her books foundering off the Ivory Coast and plundered and distributed very cheaply throughout West Africa and beyond. A sort of 'Whisky Galore' of books. Africans learned to read from her works, it also helped that her message was fundamentally Christian. So it's all about availability; that being said she was popular as an easy and sensational, not to say melodramatic, read - with spiritualist and occult overtones (15 of her books are in Bleiler). In her day she made Rowling size wads of money which she spent on many eccentric causes and whims. Wikipedia has this to say of her:

'Professional critics deplored her books. The Jacqueline Susann of her time, her difficult ego and huge sales inspired some quotable moments of spite. Grant Allen called her, in the pages of The Spectator, "a woman of deplorable talent who imagined that she was a genius, and was accepted as a genius by a public to whose commonplace 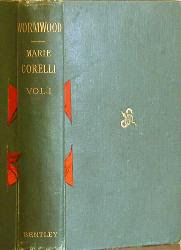 sentimentalities and prejudices she gave a glamorous setting;" James Agate represented her as combining "the imagination of a Poe with the style of an Ouida and the mentality of a nursemaid."'

This novel 'Wormwood', possibly her most valuable book, appears first in 3 vols (a 'three decker') and the first state came with red ribbons sewn in at at the sides of the front hinges which have almost always perished or exist only as a remnant. A copy wrapped in brown paper from day one might still have them in pristine condition. The great Victorian fiction collector Robert Lee Wolff wrote "When I was starting out as a collector I once saw for sale a copy of WORMWOOD with the crossed red ribbons on the spines. Most of the copies printed, destined for circulating libraries, were plain. I did not buy it because one of the ribons had been torn. I have never seen one since." Pic of ribboned copy on right.

Although not in Bleiler, and not really her scarcest book 'Wormwood' appears to be her most expensive book. Some of her late books and her ghost stories are more elusive. 'Wormwood' is partly about the absinthe craze, it recounts the degeneration of one Gaston Beauvais, a promising young Parisian man who, betrayed by his fiancée and his best friend, becomes addicted to the pale green liquid. A reader at Amazon opines that the book is ' an important contribution to the literature of fin de siècle decadence' but Marie was not quite in the class of Ducasse, Huysmans or Wilde. On the subject of the divine Oscar, while in Reading Gaol a friendly screw bought him some Corelli to read; having tried to read her he said "Now don't think I have anything against her moral character...but from the way she writes she ought to be in here." Oddly enough the sale of her house contents at Stratford upon Avon in 1943 was rather like the hideous sale of Wilde's belongings in the 1890s at Tite Street - with a jeering auctioneer and prices laughably low. 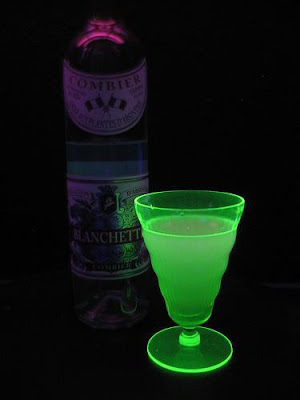 VALUE? There is one copy on the web at £875 and it has a suggestion of red ribbons. A not unthinkable price. I actually have a customer for this book (a collector of alcohol related material) and would pay £500 at least for a decent 3 vol copy -so please check out attics and steamer trunks etc., The American one volume 1890 edition is worth considerably less, an unpleasant sounding copy of what might be a first (at a mindblowing £425) is described thus 'Good - Collectible/No Jacket - Description: Privately Owned Burgandy Cloth Hardcover, privately owned, no highlighting, no underlining, no extra markings, no written notes and no folded pages. 327 pages, Drop shipping, no problem!...My book sellers group specializes in ACCURATE DESCRIPTIONS.' I guess the guy normally deals in text books. OUTLOOK Pretty good, 3 deckers are always very impressive, usually uncommon and still underpinned with a good body of collectors + absinthe has apparently made something of a comeback with modish young topers.
Posted by Bookride at 10/04/2008

Serendipity's copy was scouted by Bill M. at a used bookshop on Northern Vancouver Island, where the books were priced at $5.00 - per volume. Just goes to show....

I have a copy of Corelli's Wormwood that is in good shape. I would be willing to consider selling it. It has an inscription inside the front dated 1898, Contact me at markweismd@rocketmail.com