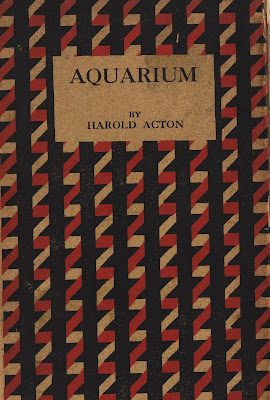 
POETRY / BRIDESHEAD GENERATION
‘ Drunk with the whiff of steak in passage-ways…’. (Young Sailor ).Sounds familiar, doesn’t it ? Or how about ‘Mr Bedlam’s Sunday Breakfast’ for the title of a poem? It is hardly surprising that the intoxicating influence of T .S. Eliot on an impressionable freshman like Harold Acton at Oxford in 1922/23 would have been reflected in this, his first book. Indeed, Acton was notorious for declaiming passages from The Waste Land from his window at Christ Church and for being one of the ‘ aesthetes ‘ at the University, along with Betjeman, Waugh and Connolly. Indeed Waugh, who is said to have drawn the best parts of Anthony Blanche in Brideshead Revisited and Ambrose Silk in Put Out More Flags from Acton, claimed he and his friend shared ‘ gusto ..a zest for the variety and absurdity of the life opening to us, a veneration for artists, a scorn for the bogus.’ And this hedonism is certainly present in Aquarium. .

Aquarium has received very little critical attention since it appeared—which may be an example of reverse snobbism by writers on early modernism –the idea that someone with all the privileges that Acton enjoyed ( Italian palazzo, paintings by Italian masters on the walls etc ) could not possibly have written anything worth considering at the age of 19. But the fact remains that despite the verbal showing off of an adolescent flexing his muscles (nacreous, mephitic, fuliginous, nubiferousness are some examples ) many of the poems in Aquarium aren’t half bad.

The book shows obvious echoes of Edith Sitwell, whose Bucolic Comedies had appeared in a similar format from the same publisher a year earlier (Acton dedicates a poem to her ). But while Sitwell’s lyrics primarily show her musicality Acton’s poems are strongly visual, even when he is nicking the idea of a poem with a musical theme from the older poet, as in ‘Conversazione of Musical Instruments ‘. Acton seems inevitably drawn to images of a gorgeous opulence , which can be sometimes overpoweringly artificial and stifling. And though he can visualize the naturalistic urban scene, it is always with the disgust of an aesthete surveying the horrors of the Industrial Age.

While images of affluence are often preferred :


Aquarium is a sought after book, possibly due to the Brideshead Effect . Four years ago it featured regularly in the Wants List of Book and Magazine Collector at £80. At about this time Ulysses were asking £375 for a copy inscribed by Acton . Another copy, this time inscribed to Desmond Harmsworth featured in a recent Bloomsbury sale***. Most, including my own copy, for which I paid twenty pence in a Birmingham bric-brac shop some 30 years ago, seem to lose bits or all of their back-strips. A glassine jacket has been mentioned by dealers , but I haven’t seen a copy with one. Today ABE have just three copies—oddly two from booksellers in Wales—and though all seem very similar in condition, prices range from £70 to £180. [ R.M.Healey]

Caricature of Acton (with megaphone) above by Evelyn Waugh--no mean draughtsman. Thanks Robin. I have a feeling that was me offering £80 in the BMC for 'Aquarium'. It was not so much that the book was a surefire earner but if someone had a copy they might well have other rarer survivals from the 1920s. A good book on this crowd is Martin Green's 'Children of the Sun'. I recall having Graham Greene's annotated copy in a time when I did printed catalogues. The Acton I would like to have is his Hours Press book 'This Chaos' - it summons up this jazzy era--especially the Bright Young Things, our own sonnenkinder. I have started to collect Hours Press in a leisurely way --should any reader see any about. Lastly someone who had met Sir Harold told me had the world's most fluting voice...

*** Indeed on 12/12/08 someone paid £660 for a lot described thus. ' Aquarium, upper hinge weak, original patterned-paper boards, lacking backstrip, nick to top edge of upper board, 1923; An Indian Ass, original cloth, slightly soiled, 1923; Four Sonnets, folded sheet stapled in original blue-grey wrappers, n.p., n.d., the first two first editions, signed and inscribed by the author to Desmond Harmsworth on front free endpaper ; and another from Acton's library with his signature...' Judging by the price the buyer was probably an end-user, rather than a dealer, unless the unnamed book was a great rarity. Note that the backstrip was missing yet again...
Posted by Bookride at 6/28/2009

I thought that last piece might be a bit of a flypaper, glad it's gone -

'The bailey beareth the belle away'

I have an odd and rather disconcerting feeling that i once had a copy of Aquarium and gave it away in a charity box with several other Actons - damn it.

Nigel, your blog is one of the most entertaining I know, and is also incredibly useful, many thanks.