A collection of right wing books... 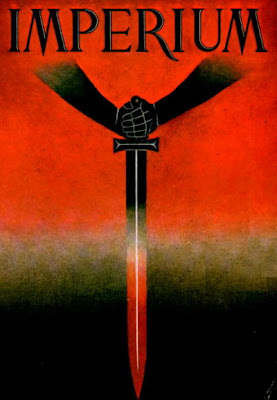 I once bought a few shelves of old books from the Borough of Brent in London. At the time they were famous for their dour doctrinaire political correctness; sure enough above the shelves they had a notice to the effect that 'the Borough of Brent does not endorse the views expressed in these books.' Thus distancing themselves from the racism and sexism of nineteenth cetury novels, the period anti-semitism and xenophobia of Buchan, Sapper and Dornford Yates etc.,. I was told this was as a consequence of complaints received from literalist locals...anyway above this posting should hang a sign 'Bookride abhors the views expressed in these books.'

Last week I bought a table full of right wing books. Not jackboot stuff , no Mosleyite brownshirt effusions (distasteful but much wanted) but more the intellectual right wing - the post Nietzchean, anti-democratic crowd--believers in aristocracy, racial theorists in the line of Arthur de Gobineau, opponents of egalitarianism, dabblers in eugenics, haters of degeneracy. Certainly the authors would not make great dinner companions but their books are undeniably saleable--more so than the left wing if you can put up with the customers. More than once in our shop I have even seen collectors of left wing literature discussing their books with right wing collectors--a temporary comradeship established through book collecting.

Here was Anthony M Ludovici, (1882 –1971) an English philosopher, Nietzschean sociologist and social critic. Almost laughably right wing -he opposed Jews, Arabs, foreigners, and 'odd people' — eccentrics, cranks and fanatics — having anything to do with government. His books, unless grossly overpriced sell with alacrity at healthy sums. Here also his associate, mentor and fellow translator of Nietzsche Oscar Levy the German- Jewish author of The Revival of Aristocracy (1906) and The Idiocy of Idealism (1940) both very hard to find and in nice shape worth £50 or more each with his 'My Battle for Nietzsche' in England proving almost unfindable. De Gobineau was here. sadly only as reprints. His major work Essai sur L'Inélgalité des Races Humaines (Essays on the Inequality of the Human Races 1853 - 55) can fetch over £4000. He has a lot to be responsible for having first developed the racialist theory of the Aryan master race. The Wikiman says '...Hitler and Nazism borrowed much of Gobineau's ideology, though Gobineau himself was not particularly anti-Semitic. When the Nazis adopted Gobineau's theories, they were forced to edit his work extensively to make it conform to their views, much as they did in the case of Nietzsche.' Here is a bloody useful 2 volume work of a right wing theorist, one Edgar Julius Jung (no relation) author of 'Der Herrschaft der Minderwertigen' (oddly translated as 'The Rule of the Inferiour.') Although opposed to decadence and liberalism he dared to criticise the thuggery of the Nazis and was murdered by the S.S. in the 'Night of the Long Knives (1934).

The prize item should have been the much desired book by Francis Parker Yockey (aka Ulick Varange) called 'Imperium'. The original from 1948 in 2 volumes can fetch over £2000, enough for a luxurious (but short) holiday in the Eurozone. Alas I merely found a handsome reprint (some chancers want a £100 + for it but realistically a £50 note is all that can be achieved.) Yockey was a far right fascist theorist continuously pursued by the FBI for over a decade -he was eventually jailed in San Francisco a 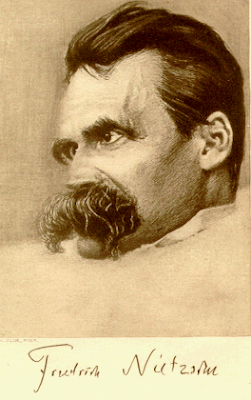 nd swallowed a cyanide capsule - committing suicide in order to protect the anonymity of his political contacts. His book 'Imperium' argues for a race-based, totalitarian path for the preservation of Western culture. It was opposed by foaming Nazis such as Colin Jordan and Lincoln Rockwell as they felt his more socialistic ideas would undermine true Nazism.

Usefully there was a load of Nietzsche (sells like hot cakes) , some Schopenhauer, a decent boxed set of Spenglers 'Decline of the West' and a 4 vol set of Jakob Grimm's 'Teutonic Mythology' + a bit of 'Occult Reich', fascinating fascism, all stuff to look out for at boot sales, library sales, flea markets and those rare shops not connected to the beastly web.

Lastly some useful information about a moderarately great 'sleeper'--not many people know that Ludovici wrote poetry (much wanted) but also several unfindable novels including 'Mansel Fellowes (1919) + a novel under the pseudonym David Valentine 'Poet's Trumpeter' (1939.) I have a customer...
Posted by Bookride at 6/01/2009

Heh -- didn't know eugenics was right-wing. Always thought it was left-wing. All the you-should-abort-if-there's-a-birth-defect and all that seems to come from the left, and the every-life-is-precious-no-matter-how-imperfect from the right, these days at least?

Yockey was a pretty fascinating fascist. Historian Kevin Coogan wrote an interesting book on him called Dreamer of the Day which is worth checking out.

Adrianne -- are you serious?

Nazi breeding programs and the extermination of inferior races and "defectives" ring any bells? Never seen the Boys from Brazil?

The history of eugenics is a little complicated because, while it was started by British conservatives such as Francis Galton, many American "Progressives" (leftish populists) and British "Liberals" came to favor it for the purpose of reducing disease and improving intelligence. Eventually, right-wingers across the world latched onto the idea and linked it with racial superiority mythology.

'More than once in our shop I have even seen collectors of left wing literature discussing their books with right wing collectors--a temporary comradeship established through book collecting.'

Hmmm - I think you can find this sort of bonding fairly commonly on the web, especially in the badlands where anti-zionism meets anti-semitism (see the Guardian's Comment is Free site).

Eugenics was certainly also a fairly mainstream belief on the 20s/30s British left - Wells, Webbs, etc. I think it's generally accepted that Britain (unlike some Scandanavian countries) was saved from eugenics legislation by a combination of eccentrics, Catholics and liberals.

I have a wee volume of Douglas Young's poems inscribed to Lavinia Derwent. A nice poet, but like many old Scot Nats he had some appalling views on race.

There are Scots Nats islamists now- equally appalling views. Actually, the fact that someone collects right-wing books doesn't necessarily mean they are right-wing. The most ultra leftist I know keeps his faith by reading- and hating- fascists rather than reading Marx or Trotsky.

Very true Anon but they tend to speak in code, rather than directly. Douglas Young was wont to gibber about 'English' and 'Negroes' and other 'Species' but you won't get that now - not openly anyway.

In the late 60s it was still not uncommon to hear senior nats talk about Catholics as if they were aliens in Scotland. You'll never hear that now - except accidentally.