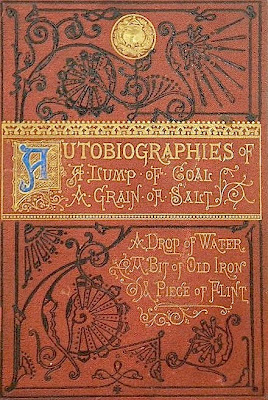 We recently posted a rather controversial list of 20 book sites - getting one site disastrously wrong (unless you are somewhat to the right of Genghis Khan.) It lead to a great rejoinder list from the esteemed Lux Mentis with some seriously useful sites. Superior stuff, it pains me to admit. However I am not Prince Hamlet nor was meant to be…

One thing that emerged from this was a need for some search tips and ways of ploughing through all the execrable ex-library stuff and worse the P.O.D's-- we're talking Kessinger and all his cohorts. I am usually searching for a book in order to ascertain its value, rather than buy it. Occasionally, if tempted, I buy a book because someone has left a wide margin of profit in it (but then you have two copies.)

As an example I will use a book I was just researching to establish price and rarity. A second edition (1871) of a sweet and once well known Victorian instructive work by Annie Carey Autobiographies of A Lump of Coal; A Grain of Salt; A Drop of Water; A Bit of Old Iron; A Piece of Flint.

1. Less is more. It is best not to put in the full title - 'Lump of Coal' will do. Likewise use just the surname (unless it is something very common like Smith, Brown, Jones etc.,). In Ms Carey's case she was also known as Ann or Anne - further potential confusion.

2. On ViaLibri (in my opinion the supreme search site, although often best used in tandem with AbeBooks) have it set for year ascending. This is a fallible method, and price descending can also be used, but both tend to put the first and early editions at the top.

3. There are are 26 matches on ViaLibri (several the same book with a dealer listing on several sites.) This can be reduced to 9 by filtering out Kessinger reprints. Simply put the word [Kessinger] in square brackets in the keywords field. The square brackets can be used for 'ex-library' but it is a less reliable word (as is POD.)

4. Mentally filter out the quietly mad overchargers and the generic booksellers who can say nothing about the condition of the book except 'may show some wear', and nothing whatever about the edition or content. These latter sellers may not even possess the book. At this point I worked out I might get £45 for my decent second edition, £6 cheaper than an Amazon scholar with a similar edition proudly described as 'VERY WORN - VERY FRAGILE!'. Ours might sell in a day, or possibly 1000 days later and somewhat reduced in price.

5. In the case of a book that cannot be found do not assume that it is valuable, it may not even be that rare - it is just that nobody has listed it. It may be irredeemably minor, so obscure that no one knows about it and therefore there will be few or no takers (even if it is painstakingly well catalogued.) Of course it might be extremely desirable and therefore valuable. There are ways of telling this but they are fallible and erratic.

6. In the case where there are too many results narrow it down with a few keywords like the publisher and the date. Filter it down further by choosing only UK booksellers (Or 'USA only' if stateside.)

7. In most case you can immediately tell the book has no significant value because there are perfectly decent copies available for way less than the price of a latte.

8. In AbeBooks do not trust the publisher field or the first edition, signed or dust wrapper buttons. They only bring up items from booksellers who have put their books in the correct fields. Trust only keywords.

9. Do not totally trust search engines at all. They have many glitches and were not designed by Alan Turing. Sometimes they will not find a perfectly common book which they will then find easily the next day. If flummoxed try several megasites such as Addall and Bookfinder (both extremely useful by the way.)

10. Use Babylon or Babel to translate foreign descriptions, often the book is in unexpected condition (fine or foul.) You could learn a few phrases like envoi de l'auteur ( signed presentation from the author) and rousseurs (foxing) and broché (paper bound, paperback.)

There are many methods - suggestions, challenges and tips are very welcome. However putting in full title , full name of author, full publisher (('Sweet, Maxwell, Kirby and Gusher') is a no-no, unless you are trying to convince someone that the book is rare. This devious method is not unknown in commerce... no names, no pack drill.
Posted by Bookride at 5/14/2010

Some thoughts about "web books searchings tips" from an italian bookish.

The best way for searching books, who includes many of your tips listed on this post, is in my opinion the Google search.
1.1. This way needs two preliminary tricks: go on "search settings" on Google's homepage and check if there isn't a filter on your search; otherwise choose "Do not filter my search results"; after, choose also "Display 100 results per pages"
1.2. Go on Google search, put the title or a significative parts of it, close it into the quote, and add date of edition and/or place of edition (better for ancient books) and/or publisher (better for the modern books, post 1900). Google starts searching pages for you from vialibri, abebooks, amazon and many other booksites, small one and amateur one included.
1.3. If the results are too many, try to add some other part of the title/the name of the autor/something else about book (subtitle, curator, translator...).
1.4. Scroll the page of results and click holding down apple(on mac) or ctrl (on pc) on the link you want to check. In that way youll'have a single windows where the first tab is the Google's results page and follows are the tabs of the single results yo've clicked.
1.5. After done your selection, apply to study it.
1.6. Some other related tips: when you get results from big booksites like amazon, abebooks and so on, copy name of the single bookseller who selling your book and put it on Google. Probably he has his personal booksite. Go on and check if the book is available and/or contact bookseller with mail or phone to have many informations, also about condition of the book, pictures, shipping fees, discount and whatever you want to. Also, offen booksellers apply a surcharge on their price putting their books on big sites. Infact these, like abebook & c., are really expensive for the booksellers (percentages, rates, charges, fixed costs... for example abebooks applies a percentage of its revenue even on shipping fees). Thus, if you contact bookseller directly, you can save up to 10-20%.
1.7. If you want to check results furtherly, go on the metasites like used.addall.com and www.marelibri.com . Together they cover 35 biggest booksites of the world (look at bottom of the page on used.addall ti chek the sites covered; instead on marelibri.com look on "Advancedd search" . Carefully at the prices's currency: dollars or euros and always compare equal.
1.8. If you aren't sure about some bibliological detail of your book (data, autor, title...), find it and check on kvk metadatabase http://is.gd/cacyg , the largest metadatabase of the world.
1.9. If you aren't european, don't forget the european bookmarket, and not only UK sites but also French, German, Dutch, Italian booksellers... These have probably a smallest market of books than USA&UK, but they are the cradle of publishing and book market; especially on ancient books the fact they are a little bit more "peripheral" allows them to practice offen the best prices. And don't worry, 99,99 % of european bookseller is used to treat, speak and write your english language daily.
1.10. If you experience some difficulties with the booksellers'"jargon", go on ILAB-LILA website, where you'll can find an amazing multilingual glossary >> http://www.ilab.org/fre/glossary.html

fascinating stuff - thanks Nigel, thanks wubi! This post & the lux mentis site have gone straight into my Tools and Reference folder

Nigel, I've read that the expression 'to the right of Genghis Khan' perhaps dates from the notoriously awful John Wayne film 'I take this tartar woman' etc - in fact Genghis was perhaps the most collectively minded leader of all time.