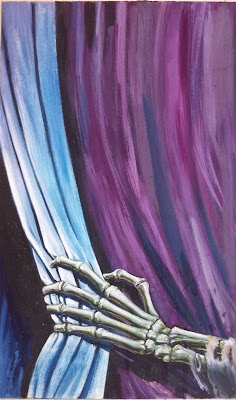 A fellow dealer has this graphic artist's illustration for a lurid book cover pinned to the wall of his book storage unit. Dealers tend to accumulate book cover art, especially if they have been at it for a few decades. He thinks he may have bought it from someone selling a quantity of book cover illustrations on card (gouache, watercolour etc.,) by the railings on Bayswater Road about 30 years ago. Art (now mostly kitsch and worse) is still sold there every Sunday. Often these pictures have lettering so you can see the title, but not in this case, and no artist had signed either. When these collections turn up they are usually quite large and some of the images are hard to sell or unattractive and thus find very few takers, but this image was well above average.

Recently he called me up to say that he had found the actual book that had used the illustration - in a box of SF, fantasy and horror paperbacks. A mild Eureka moment, celebrated with a cup of PG tips finest. The book was Horror in the Night by Richard Macgregor published by Digit in London in 1963. Not a lot is known about Macgregor, these were 5 short horror stories and he seems to have written 5 other books between 1963 and 1964 for Digit. Titles like The Deadly Sun, Creeping Plague, The Day a Village Died --- a category that came to be known as Doom Watch fiction, possibly post apocalyptic in content. Not much more is known of Macgregor (possibly a pseudonym) --you can buy the five titles available for about £30. A further book Taste of the Temptress came out in Sydney in the mid 1960s published by Eclipse, so he could have been Australian or have turned to porn or both...As for the artist it could be one R.A. Osborne (1923 - 1973) art director of Digit at the time and responsible for many of their covers including Macgregor's Day a Village Died, the story of a village plagued by killer ants. 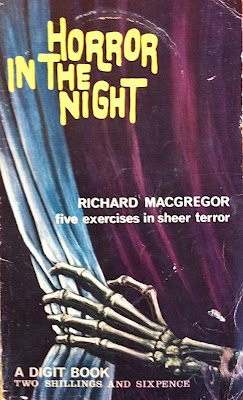 Such cover art is quite collectable and has a ready audience on Ebay but does not command life or even week changing sums -but this sort of discovery, this matching up, is a rare delight, even at second hand.
Posted by Bookride at 12/23/2010

If your friend is interested in selling such an item, he [and it is usually a he] is welcome to drop me a line at mrdirachiel [at] aol [dot] com.

It is precisely the sort of weird garish artwork I like.

Thank you in advance,