Collecting books on the early history of cinema 1. 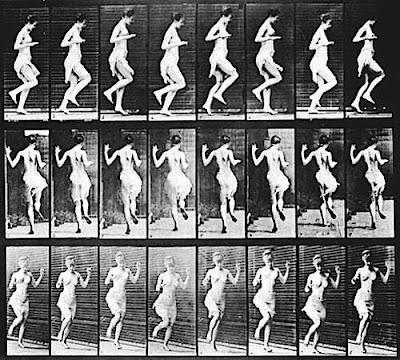 First lesson. The USA is a better place to buy and sell rare books on the Cinema. Fact. Elliott Katt, who before his recent retirement, ran the world’s largest performing arts bookstore in LA, convinced me of this twelve years ago. But I thought I’d try an experiment anyway. A couple of years ago, having failed to find a half decent Cinema bookshop in the UK, I approached Bloomsbury Auctions, who estimated my impeccably provenanced typescript of a ‘Kes’ screenplay at £50. As I had already been offered five times that by a US dealer, who even volunteered to pay carriage, I walked away and on returning home accepted this earlier offer. Are most British auction houses and dealers sniffy about books on the Cinema ? You bet.

But they shouldn’t be. Collecting in film history is a growing field, with early material being the most sought after. One of the pioneers of the moving image, Eadwerd Muybridge (born Edward Muggeridge) has recently been recognised with a major exhibition in London and his Animals in Motion, which lay the foundations for cinematography, has always been in demand. All early editions are sought after, but are often in poor condition through constant use. I paid just £2 for my rather dilapidated ( but complete ) copy of the 1902 edition over 30 years ago, but presently ABE has a good copy for $572 and two of the 1907 edition at $250 and $225. Not excessive prices, really, for such an important book.

Other early technical works on cinematography are collected, and many are priced on the low side. Katt told me of a collector in Los Angeles—a tool and die maker by trade-- who had managed to fill his modest three bedroom home in the suburbs floor to ceiling with books of all kinds, and had stuffed his garage full of cinema books, some of which were very early technical works on cinematography. One in this collection was The Life and Inventions of Thomas Alva Edison which W.K.L Dickson, a prolific inventor in Edison’s laboratory, had brought out in 1894, the year in which he also demonstrated the world’s first modern motion picture projector. At present ABE is not short of copies of this particular title —all of which are located in the States—and prices range from a competitively priced but well thumbed ex-library copy at $80 to one in fine condition at $297. Today, Katt believes that the collector with the largest haul of early technical books is Mark Ulano, the Oscar-winning production sound mixer on the film ‘Titanic’, who has published a book on the technical side of early cinema. Another pioneer on the technical side, C. Francis Jenkins, an American rival to John Logie Baird in the TV stakes, started his career in movies. His very rare Animated Pictures of 1898 is about the painterscope. Katt revealed to me that he had only ever handled two copies—the last he sold for $5,000—a little steep even for this legendary rarity. At present ABE have a couple of grubby ex-library copies at under a $100 and two lovely copies at $750 and $1,000 plus. It would seem that the book has become less elusive in recent years.

Books on or by early film makers are avidly collected and are a little pricier. The life and work of D. W. Griffith, director of ‘The Birth of a Nation’ (1915) is well documented, but this pioneer also went into print himself early in his career, though you might spend a lifetime locating a copy of the exceptionally scarce Biography of David Wark Griffith and a Brief History of the Motion Picture in America (c1920), which appeared in the form of a 36 page pamphlet from ‘ D. W. Griffith Service/Exhibitor’s Trade Review ‘. A dealer in West Virginia wants $3,500 for his lavishly illustrated gem. This works out at around $95 a page !!

To be continued...Many thanks Robin. I'm keeping an eye open for the Wark Griffith pamphlet -- it appears to be 9 by 12 inches, so not small, and comes with an illustrated gray paper dust jacket with a drawing of Griffith on the front panel. At $3500 the dealer appears to have come up with a price large enough to stop all buyers from buying. This is the holy grail for many dealers who hate to see a good book sell - but in the meantime his price could be a useful comparison marker for other copies selling at slightly less. This may happen on a regular basis but it seems unlikely as WorldCat cites just 2 copies...
Posted by Bookride at 4/17/2011

Thanks Robin, thanks Nigel. It's amazing how little interest there was in early cinema until quite recently.

Kevin Brownlow - author of The War, the west and the Wilderness - described how he found nitrate film of a re-enactment of the battle of the Little Big Horn rotting away.

The film's plot was rubbish - the real Buffalo Bill riding to try to save Custer - but vastly important in other ways. Several of the Lakota warriors in the film had been at both the Little Big Horn and Wounded Knee.

Seems odd but as late as the 60s there seems to have been not great interest in cinema memorabilia.

San Francisco, CA here. I don't handle a lot of antiquarian books but I do a lot of creative and animation books. Muybridge is in my personal animation reference library (not for sale).

Much appreciate anything else you might add about crossover between movies/animation and book dealing.