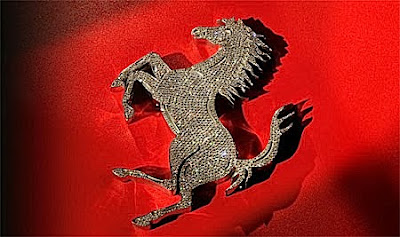 A book affordable only by the likes of Jensen Button and Lewis Hamilton, and weighing in at 37kg, which is slightly more than Bernie Ecclestone, the Official Ferrari Opus Enzo Diamante has just been published at a whizzing £155,000, which is £10,000 more than the company’s cheapest car. Ferrari only plan to allocate one copy to each country in the world of this deluxe, diamond-encrusted tome, signed by every living Ferrari F1 champion. If you are too poor to buy one, or don’t relish moving to another country—say Mali or Niger—to obtain a copy, you may have to get by with one of the cheaper editions-- the ‘Enzo’ model at £20,000 and limited to 400 copies---or the dirt cheap ‘Classic ‘—which retails at £2,000, and is limited to 4,100 copies worldwide. What all customers get for their money are 852 pages of detailed specifications on every Ferrari ever made, oodles of knock-out glossy pics plus notes on every Ferrari driver. As ABE feature none of these volumes at present, cheapskate petrolheads may have to make do with Alessandro’s Sannia’s Ferrari—Icon of Style, which came out this year and costs around $13 on ABE

Is the Diamante likely to be a clever investment ? One wealthy Australian thinks so. He has already bought his nation’s allocation of one copy. I cannot possibly comment on his taste in books, but instinct says it that his may have been a wise buy, seeing that fast cars, unlike fast art ( vide Richard Prince, Koons, Hirst ) will never go out of fashion as long as there is enough petrol to fuel the damn things. Are the diamonds and celebrity signatures worth the extra £151,000 ? Not in my view, though rarity does count for something. 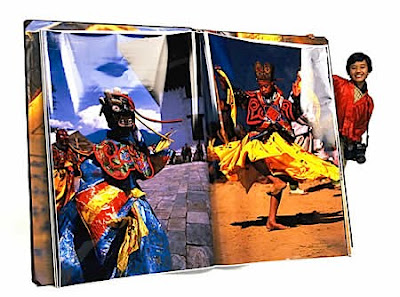 The Diamante is not particularly heavy in the champion book stakes. If we discount the 14,300 ancient stone tablets inscribed with Buddhist scriptures, which is by far the heaviest ‘ book ‘, and one likely to remain in an edition limited to one, Bhutan: a Visual Odyssey Across the last Himalayan Kingdom (2003) at 133 lbs is much heavier. It is also larger, at 7 foot by 5 foot, and is, according to the Guinness Book of Records, the largest in the world, though for all its size, it is cheaper than the Diamante. One copy has been acquired by Special Collections at the University of Washington, where it is on display outside the Graduate Reading Room in Suzallo Library. Pages are turned once a month. There are a few ‘trade ‘editions on ABE. One bumped ex-library copy is priced at $297, but if you wish to buy the dearest mint condition copy you will get exactly 5 cents change from $2,500.

Bhutan may be the largest book in the world, but it is by no means the heaviest. This distinction belongs to the informally titled Ethiopian Book of Signatures and Vision Statements, a compendium of ‘ 30 million vision statements ‘ of Ethiopians around the world, including street children. In 2007 the publisher, Gana Seb Trading, a paper manufacturer, said the book will comprise three volumes, each measuring a metre in height and weighing 500 kgs. ( therefore totalling 3,300 lbs ), and would be transported by forklift. Three kgs. of silver will be used to cover the spines.

From this description the book sounds rather like a modern-day Domesday Book, or more accurately, a gigantic autograph book. It was begun in June 2007 and has may have been completed by now. It is not known whether the book will updated every decade or so; or whether it will be published in a ( presumably ) condensed form and made available to reference libraries. But the basic idea is an appealing one. Perhaps instead of a census, the UK could do something similar in 2022.
[R.M.Healey]

Many thanks Robin. Very fat art books used to be known in my part of the trade as 'thicks' but these are in a new category. I thought Helmut Newton's 'Sumo' was a bastard to lift but the Bhutan book would need two strong men, possibly three. It is about the size of a Ping-Pong table and weighs more than Robbie Coltrane. It came out of an Adobe MIT/Microsoft iCampus initiative so presumably Bill Gates and a few other digerati have copies.

How do you shelve a book like that! ? I have met miniature book collectors but have never heard of a collector of outsize books; there are enough now being produced to spawn a few punters. If you want to start with a big one the Bhutan book is $10000 (most of the money goes to charity) however delivery charges might be a little more.
Posted by Bookride at 4/28/2011

I'm moving to Andorra to get my Ferrari book. Bruce Ligh