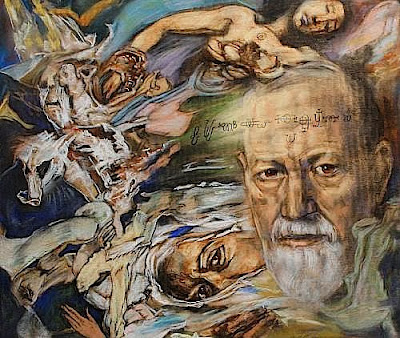 As someone who used to deal in Austin Osman Spare art and books I was intrigued by a rare exhibition catalogue that I discovered last week in a box. It was for a show at the Archer Gallery in Westbourne Grove (London) in October 1955, six months before Spare's death at age 70. The introduction is by Kenneth Grant, an occultist and writer who is himself highly collectable. Having written an introduction to an AOS art catalogue myself (early 1980s) it was fascinating to see how Grant went about it. Such pieces are without exception enthusiastic, even celebratory, sometimes with elaborate claims being made for the artist. I praised his 'courageous originality' and talked of comparisons with Durer, Goya, Rops and Hokusai. Grant goes somewhat further in his claims, as you will see...

Frank Lechford, an old dealer in military books and a friend of AOS, used to say that something weird always happened around Spare and sure enough at our 1980s exhibition a fight broke out, unpleasant but short. One wonders who attended the 1955 exhibition and what strangeness occurred there. Here is an abridged version of Kenneth Grant's introduction ('An Appreciation'):


The spirit which permeates the artistic creations of Austin Osman Spare may not be easily ensnared or examined, for it is exceedingly tenuous and elusive, as fugitive as the odour of a rose and as cloyingly nostalgic. 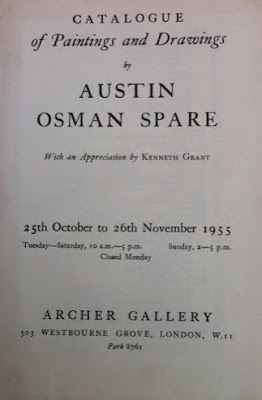 would read into his flowing arabesque line and into his haunting modulations of light and shade the speech of usual things will step back baffled by the hint of wild and unknown things which are here presented to view. It is as if a corner of the veil of inscrutable mysteries were suddenly lifted before our eyes ...It is the nostalgia of remembered remoteness; the anguish of things lost and all but regained, but which slip yet again from the memory's grasp; the disquietude that comes from the knowledge that Spare has unerringly captured for us what we ourselves are unable to shadow forth from the dark deep confines of our latent being...

...here are not only the creations of an artist gifted beyond the normal, but these very creations themselves are the true delineations of a realm of being existing here and now at a level of awareness veiled to the uninitiated vision of the generality of men. One might almost say that far from being fanciful products of a highly trained and vivid imagination, these works represent faithful recordings of those latent levels wherein and wherefrom proceed the motivating causes of all the complex and inscrutable mentations, fragments of which only appear within the limited orbit of the so-called 'rational' activities of the mundanely conscious individual. 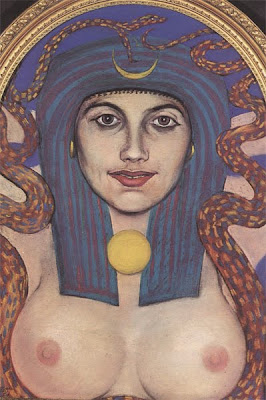 We have to understand not only the mysteries of dream and of sleep, of waking consciousness and the mechanism of desire, but also we should have direct experience of the 'knower' of all these various states of consciousness before we can begin to understand the fugitive essence of Spare's enchanted creations. For even as the universe is a glamour cast forth from and by the mind of man... so also these creations subsist as realities within a deeper consciousness than is manifest in the everyday waking activities wherein the human machine lives and moves. From regions which make these activities seem merely automatic reactions to external phenomena, Spare brings the tenuous thread of his dream into the reality of day, and makes the dream-intrusion into waking awareness a subtle perichoresis of two worlds as remote and apart from each other as the outward form and appearance of man himself is to the soul which exists in the veiled sanctuaries of his unknown realities.

This perichoresis is what Spare has achieved and it is the greatest witness to the power of his magic that such interpenetration does not result in confusion but in unity, not in distortion but in beauty, not in conflict and pain but in perfect balance and intensity of rapture. All these things form the thread of the bright tapestries wherewith these walls are hung. If we do not fail to lose the central thread of all, we shall pass from picture to picture as from delight to delight, relishing a bliss that is rarely given to mortal man in his hour of upheaval, disharmony and corruption. To Spare- as for the individual who is able to stay possessed of this central thread- none of these imperfections exist, and we are brought to a vision of transcending beauty, seeing the perfection of the whole in the true relation of its myriad parts. [Kenneth Grant 1955.]

As for 'perichoresis' (which Grant is using metaphorically) some definitions are the length of a short story and there is even a video about its meaning and pronunciation, but put simply it is a term used in the theology of the Trinity to indicate the intimate union, mutual indwelling, or mutual interpenetration of the three members of the Trinity with each other. By the way--the pamphlet must be worth £50+ and works by Grant can go for up to £400. The colour Goddess image was later used for 'Man Myth and Magic' in the 1970s. One of the few collectable part-works...The portrait of Freud was item 151 in this 1955 catalogue of 221 works and was priced at 10 guineas, probably worth a little north of 2000 guineas now (he's not Frank Auerbach) but a decent investment. Thanks to the Cabinet of the Solar Plexus who display this fine slightly sidereal painting.
Posted by Bookride at 5/06/2011

You forgot to mention the Eleohant.