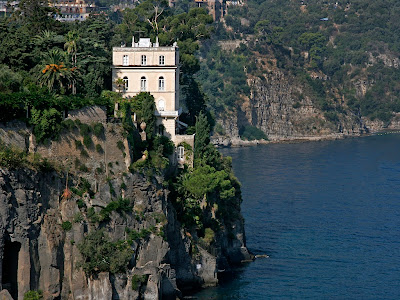 I found this art noveau style bookplate in all five vols of a 1900 English edition of Humboldt's Cosmos bound in leather (by Root and Son.) This bookplate set me off on a quest for where Villa Sirena might have been. My search took me to the siren haunted town of Sorrento on the Bay of Naples where Astor (then the richest man in the world) had bought several villas. None appeared to be now called Villa Sirena but this seems to be it; I quote from an amalgam of holiday brochures:

"...in the first century A.D. Agrippa Postumus, grandson of Emperor Augustus built aa fine villa in the same place where is now Villa Tritone (later Villa Sirena / Villa Dei Leoni) and Ovid was one of its first eminent visitors.
On this site in the thirteenth century a convent was built for nuns belonging to an enclosed order. At the end of the sixteenth century, after a destructive invasion by the Saracens, the place was rebuilt by Dominican priests, who started to cultivate the garden, bringing the first citrus fruits trees from the Middle East. At that time, in 1577, Torquato Tasso, Sorrento's foremost poet, author of "Jerusalem Delivered", shared his torments with the prior of the monastery.
In 1888 Count Labonia, a distinguished collector of antiquities and friend of Heinrich Schliemann, the excavator of Troy, bought the site and began to build the present house which he called "Aux Roches Grises", recalling the grey rocks on which the house stands. At the beginning of the twentieth century, U.S. Ambassador William Waldorf Astor bought the house and, where the convent once stood, he designed the garden, behind the villa and on either side, encircled by walls and balustrades, to protect this private green 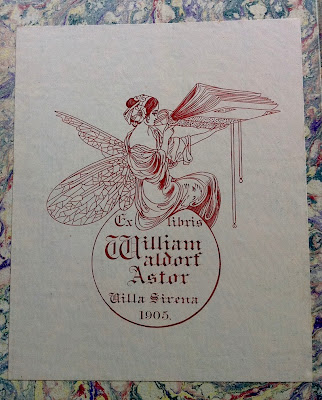 oasis of palms, oranges, cycas, cypresses, eucalyptus, pines. He bought the Villa (then called Villa Syrene) in 1906 and made it a repository for his vast and ever-growing collection of classical, medieval, and Renaissance statuary. The convent was destroyed and a wall along the property’s seaward side was raised, where various openings were made and decorated with medieval ruins and Greek-style temples. Secret paths and allées run through the lush vegetation revealing statues, urns, fountains and glimpses of sea and sky through the windows cut out in the high wall along the seaward side..."

So a distinguished place with 2000 years of history, serious literary connections and probably a fabulous library of which my vols (for which I paid £50 and hope to double) formed a tiny part. Through some route more strange and circuitous than the 'secret paths' of this villa the book ended up at Bradfield College Science Library and proudly bears their bold blue stamps. These lower the price but are fairly neatly applied. It is interesting to note from 1943 – 1945, the property hosted Benedetto Croce, turning it into a political crossroads for the rising Republic of Italy. The official signing of the declaration for the first Italian government after the war was signed in the room which is now used as a study. The place can be rented (8 bedrooms, sleeps 16 -- towels and beach towels changed every 3 days and bed linens once a week.) I doubt it is cheap.

Deeper research shows that William Waldorf Astor wrote a short story for the Pall Mall Gazette (which he had bought for £50,0000) of July 1906 called The Last of the Tenth Legion. It is of a decidedly occult/ theosophical bent beginning thus 'It was to his Villa Sirena, at Sorrento, amid its interbraiding shine and dark, that Vaini summoned me, in May 1895, for a psychical experiment...'Although it starts like Borges it does not quite have the great man's touch. In 1900 he published A Pharaoh's Daughter and Other Stories -- a Bleiler title, being a collection of fantasy stories including tales of terror and the supernatural. A fine copy can sell for £100. Oddly enough his cousin John Jacob Astor is also responsible for a Bleiler title A Journey in Other Worlds (Appleton NY 1894) describing the earth in the year 2000, along with journeys to Jupiter and Saturn. Another £100 book. One critic called it "..a pioneering work that is of considerable literary, historical, and social interest." In Villa Sirena's library one wonders if there was a large section of fantasy, vampire novels, interplanetary travel and occult detective fiction, possibly now sitting unclaimed in a Neapolitan warehouse or a storage room at Bradfield Science College...
Posted by Bookride at 5/30/2011

caterer to the stars said...

John Jacob Astor went down on the Titanic with several other collected writers. Please do a blog about these too.

WOW Off to Sorrento in July so will look out for this cliff side villa.