I sometimes look at the very long list A Book that Looks Like Nothing on Ebay forums. Worth checking to jog the memory before a library sale, boot fair or a raid on a flea market. The thread began in 2003 and covers all sorts of books that have (mostly) appeared on Ebay and that have made surprising sums. Surprising sums can mean a book that looks like an Amazon one cent special but makes $12 or a book bought for $12 at a dawn swap meet and sells for $3000. Some of the books are now 'netblown' i.e too many copies have appeared online and the price has descended alarmingly. The opposite can happen if a book is genuinely rare and lots of people (with money) want it.

Some of the books, to my mind actually look like something The Lion the Witch and The Wardrobe, the 1939 Shell Guide to Devon, Dodd and Graham's Security Analysis (NY 1934 - a fairly easy $10,000 for a 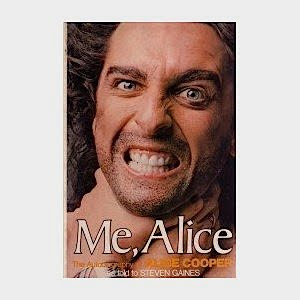 nice first) Carnival Strippers by Susan Meiselas, Clapp's The Big Bender (1938) and V by Thomas Pynchon. But who knows about Zimmermann's Source Code & Internals, Meerloo's Rape of the Mind (1956) Disco Bloodbath, Shafer's Mathematical Theory of Evidence (1976) etc.,? All circa S100 and look like nada.

What defines a 'Nothing' book? It cannot be too mainstream as there will be too many copies, or too minor and cultish as there will be too few copies and even less punters. Thus a big fat book on Elvis might be worth $0.001 but a book by Elvis's hard-worked Graceland cook might get you $50.

On the subject of Rock the list contains two Alice Cooper sleepers - the first, one of the more valuable rock rarities, is Alice's Me, Alice (Putnam, N.Y. 1976) a roaring tale of the early days of his career, along with the alcoholism (beer and whisky) that nearly ended him + his mentor Frank Zappa, hippies, sex, drugs and his fling with a GTO plaster-caster etc., It seems to go for $500 or more in a nice jacket although one guy says he wouldn't sell his signed copy for $20,000. A dealer called Splatterhead seems to have sold his copy for $666.66 and Alice's collaborator / ghost Steven Gaines is selling his remaining allotted copies on Amazon at a chancer's $2000 each (but he will sign it if requested.) Meanwhile another Alice Cooper book by band member Bob Greene Billion Dollar Baby: A provocative young journalist chronicles his adventures on tour as a performing member of The Alice Cooper Rock-and-Roll Band (1974) can get you well over $100 in a jacket and a $50 note in paperback.

Even one of his song books Alice Cooper Complete (Bizarre, L.A. 1973) is nodding on a $100. Alice's wild days are well behind him now and he has moved on to recovery, good works and a golf handicap of two. His 2007 work Alice Cooper, Golf Monster: A Rock 'n' Roller's Life and 12 Steps to Becoming a Golf Addict can be had for $3, however its hardback publication was greeted with queues all round the shop at his London signing at Borders and there are no signed copies online - which bodes well for his collectability. A piece of ephemera to watch out for are fake billion dollar bills from his 1973 tour. They can be had for $15 when they occasionally surface on Ebay... 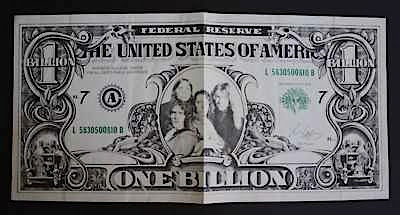 How can you tell if a fake billion dollar bill is actualy a real fake?

CULT OF THE SEER said...

THe great objectors to Alice in Britannia were David Blunkett and Leo Abse. Odd bedfellows!

Thanks Cult and thanks Anon-- the answer is that Alicean Billion Dollar bills are not worth faking (yet).