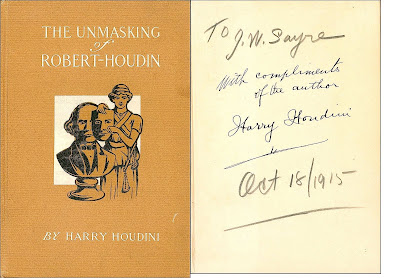 This can be an expensive area for collectors. Amateur magicians and historians of the subject are up against big name magicians like David Copperfield, Raymond Teller and Ricky Jay, who can afford the rarest and most desirable titles. However, those with limited means may build up a decent collection, provided they steer clear of certain glamorous titles, aren’t bothered too much about editions and condition, and avoid signed and extra illustrated items.

Two works should be on top of the rich collector’s wish list. One is Porta’s Magi Naturalis, which dates from 1558. As its title implies, it deals primarily with the wonderful properties of Nature, rather than deception and illusion. There are, for instance, sections on geology, optics, cooking, magnetism and gunpowder, but (alas) no illustrations. This is a truly early work, and was much reprinted in the original Latin; the English edition didn’t appear until 1658. It is extremely early and very rare, but the fact that the first English edition didn’t appear for a hundred years rather spoils its appeal for me. If you are lucky enough to find a copy of the first in Latin it will cost you a cool thousand pounds today, though the edition in English is more sought after. Equally glamorous is Reginald Scot’s The Discoverie of Witchcraft (1584), a legendary work of myth-debunking from an enlightened JP who argued that the magic ascribed to witches could be reproduced by anyone with the skills 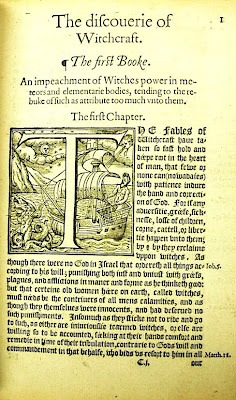 and resources. Scot made many enemies in his defence of those who were persecuted as witches, and James I ordered the burning of all copies of the book in 1603. Few survived the flames and those that did could probably be numbered at below twenty.

Raymond Teller was pursuing a first of The Discoverie not too long ago and was overjoyed to find one, despite its steep price. There are hundreds of Dover reprints around and currently on ABE twelve copies of the 1930 John Rodker limited edition, with an introduction by Montague Summers. One chancer has the gall to boast that this particular edition is ‘ almost as rare as the 1st ‘. Hollow laughter from the direction of Raymond Teller ! Hocus Pocus Junior (1634) was heavily indebted to Scot, but is worth looking out for, nevertheless, for its illustrations and lively descriptions of legerdemain and magic trickery. A first will set you back thousands, but a 1950 limited edition reprint is currently on ABE at an amazing $775.

The books on magic you are more likely to find today date from the late eighteenth century, were often scissors and paste jobs. One of the better known examples is the four volume Rational Recreations (1774 ) by William Hooper, who is said to have been heavily indebted to Guyot’s Nouvelle Recreations, Physique et Mathematique. Hooper brings together a lot of practical or ‘ parlour ‘magic, such as optical illusions, magnetism, chemical experiments and fireworks . A ‘ sturdy ‘copy of the 1794 edition is priced at a not unreasonable £495 on ABE, where there is also a first at double that figure. John Badcock, was another- scissors- and- paste man whose Philosophical Recreations or Winter Amusements (circa 1820) contains material from a variety of sources. All editions appear to feature many attractive plates, which may explain the fancy prices—from $719 - $1200. A similar kind of book, Endless Amusement (1822), which went through many editions in the early 19th century, will cost at least £150.

Works on the history of magic date from the Victorian period are perhaps more sought after by collectors, since they were not often reprinted. Thomas Frost wrote three books, all of which are worth looking out for. The Old Showman and the Old London Fairs (1874) can be had for around $250. His Last Lives of the Conjurors (1876 )is much rarer, while Circus Life (1876), is rightly been described as a ‘ classic ‘ of its type. If you can tolerate a ‘ working ‘ copy of this book there is one in New Zealand at a reasonable $100. For a better copy you may have to pay four times this amount elsewhere.

Along with the early books on magic were the magazines, most of which are hard to find. The Conjuror’s Magazine was published in the 1790s and was the earliest magazine entirely devoted to magic. It’s very difficult to locate a single volume, let alone a complete run. Look out for the supplements on physiognomy, which were bound in with the magazine, but were often removed.

Houdini is a name collectors can’t ignore, though he was more a showman than a gifted illusionist. His books are ghosted because he couldn’t write for toffee. His titles, which include The Unmasking of Robert Houdin (1908), are collected avidly in his native United States, where they tend to be more expensive, especially if signed. In fact, it seems that anything associated with Houdini has a fancy price tag Stateside. Currently on ABE are a paper bag signed by the master at a painful $3,000+ while a longish letter of 1901 from him comes in at $14,500. All collectors must beware of forgeries. [ R.M. Healey]

Many thanks Robin. 'Endless amusement' as the old book has it. It is very common and very slightly vexing for dealers to hear that collections of magic books have been offered to the Magic Circle, almost as common as military books that have been offered to the Imperial War Museum. The magic books always seem to get accepted but the military books are far less often wanted...
Posted by Bookride at 12/07/2011

Magic catalogues can often be had on the cheap. I found one from the 1940's at a local bookstore for $2.00 and sent it to a friend who collects them.