I was chuffed to see a copy of this book making £840 at Dominic Winter yesterday. It was described thus:

Author's presentation copy, inscribed to title: "John Le Carre aka David Cornwell - with best wishes! Cornwall 2nd March '03. P.S. I'm not sure that poor George Smiley c[oul]d handle the present mess - I'm rather glad he hung up his boots! J.L.C." The inscription refers to the 2003 invasion of Iraq.

Le Carre, of course, was no fan of Blair - feeling he was America's poodle ('minstrel') in the 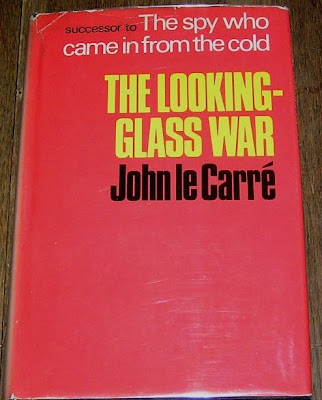 Iraq war and called for him to resign as quickly and 'elegantly' as possible. The inscription is surprisingly restrained in view of this. It belies the old 'Flatsigned' axiom that a plain signature is worth more than an inscription as copies of the book merely signed by Le Carré can be had for £100. The egregious inventor of the word wrote an entire guide book where every plain signature was priced 25% higher than an inscription. Thus if Nelson Mandela inscribed a book to someone he had known in jail it would be trumped by a plain signature...

Not a scarce book but hard to find in faultless condition as the spine tends to fade, sometimes badly. The preceding book The Spy Who Came in from the Cold is also not scarce but worth ten times more. The jacket on the Spy did not change in any way for the first dozen or so printings so marriages are not uncommon, a fine jacket often covering a slightly tired looking book. Le Carre is a generous signer and late works signed can be had for £20 or less, however I think he will prove a good investment in the long term. The latest star heavy movie was well received. In it Gary Oldman (formerly Sid Vicious and Joe Orton) played the stolid George Smiley. According to Huffington at the UK premiere of Tinker Tailor Soldier Spy Oldman asked Le Carré if he liked what he'd seen. "I'm chuffed to fuck," came the reply.
Posted by Bookride at 12/16/2011

Also at this country auction a decent copy of the Hogarth Press Mirrlees book PARIS made about 3200 pounds with commissions included. You covered this a couple of months back.

Back in the 80's I had a printer's pack of this title. It came from the rep for Heinemann who had retired and found it in his atttic. We did a little deal and for a short period I made hay with MINT copies with UNFADED spines of the first printings. Unless those copies were wrapped in brown paper and put in a dark room I guess they have all faded to the same pale pink as all the rest.

I also got mint copies, sadly only a pair, of (apparently) the first printing, in the mid-80s, but directly from Heinemann's London trade-counter. Perhaps the first impression was truly enormous - anyone know the edition history?

At the other end of the price spectrum, James Campbell on the back of the current TLS has returned to your shop in his perambulations for neglected (and cheap) books for Christmas and is delighted with his purchases and with the 'kind gentleman' who knocked a few quid off the selection.

JC calls Any Amount of Books the 'best' - so say all of us.

Merry Christmas to all and thanks to Nigel and Robin for their enthralling posts.

I reckon there was just the one printing of the Le Carre (unless someone has seen a reprint) and that it hung around for ages at Tiptree (Heinemann's warehouse). Publishers were happy to keep stock for years in those days. I was working at Gollancz in the 70's and discovered "More Prayers and Graces" illustrated by Mervyn Peake which was first published in 1957 was still in print (as a first printing). I scooted round to Bernard Stone at Turret and he bought the lot - 20pence each less trade discount. Not sure Bernard ever paid the bill though...

I forfgot to add that rather spookily after this Le Carre piece was posted I was digging around in one of the many boxes that a late customer had left to his estate and what should surface but one of those unfaded spine Le Carre I had sold him over 25 years ago. Except the spine had faded just a little...
But it sold within 24 hours of going up on ABE.

Thanks Edwin -- thanks PMB. Not fade away...Buddy's strange command...some spines can fade even under wraps, damn them. The TLS said we were the best bookshop in London from 'their lowly viewpoint' -- irony (about the lowliness) surely? Bernard Stone, a great old bookseller and genuine character as I recall N

That bloody Sigmund Freud waxwork by Bernard's front door always spooked me. I wonder where it went?
All the best for the next year N. & Edwin. Good site and great info.

Re fading I have a collection of New Naturalists and the The Natural History of Pollination (No 83 pub. 1996) spine title is a white on a band of yellow - on the spine the title has now vanished!

Edwin dude-- you need cabinets with little curtains, like the ones Cyril 'smarty boots' Connolly had to protect his modern firsts. Yus PMB that bloody Sigmund Freud waxwork-- where in hell is it now?

It was so lifelike with a disapproving look and set at the back of the shop so you couldn't get close enough to see if it was real from the window. The giveaway was that it never moved!