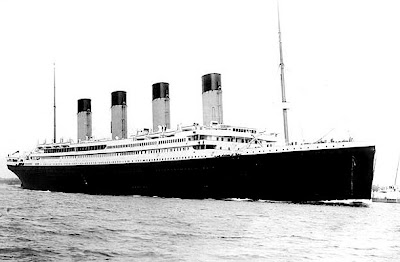 Recently TV schedules have been flooded with Titanicana. It’s the same online and in Waterstones. But Titanic mania is no new phenomenon. For many decades anything directly associated with the ill-fated liner has been collected-- from postcards, letters, autographs, telegrams, menus, brochures plates, serviettes, china , rugs, towels….The loss of the Lusitania in 1915 (1,198 people drowned) has never caught the public imagination in the same way ; nor will (presumably) The Costa Concordia, though as we speak some survivors of the latter are probably putting their own menu cards on Ebay.

Predictably, this centenary year has seen a slew of new books— re-creation, speculation, memoirs, fantasy, even crime. The first book on the disaster-- the memoirs of a crewman who survived-- appeared in 1912, and ever since, the presses have been rolling. By now we probably know all there is to know about who and what was lost. Today, the lists of ‘ famous ‘ passengers tend to focus the half dozen or so multimillionaires aboard, but a far greater figure lost that night is missing from most lists I’ve seen so far. This is W. T. Stead, the pioneering journalist who deserves to be remembered for ever as the man most responsible for exposing child prostitution in Victorian England. I sold a copy of his biography two years ago. Perhaps I should have hung onto it. Much valuable art was doubtless lost too, but the best known example was undoubtably the ‘Great Omar’, the most spectacular jewelled binding of the modern period, which had only been completed the year before by Sangorski and Sutcliffe in London and was on its way to an exhibition in New York City. I don’t know if fish are partial to leather, but I imagine that unless the book was hermetically sealed in a metal case, sea creatures would have got to it pretty quickly. And if the jewels were swallowed as well it’s a ten billion to one chance that they will ever be recovered.

Menus are not usually art works, but they are easy to stow away in the event of a ‘unsinkable’ liner going down. So it comes as no surprise that 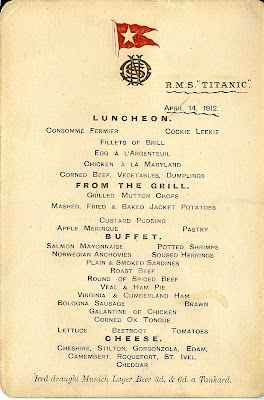 Titanic menus turn up occasionally. The most expensive menu ever sold—a single piece of card detailing the final luncheon for First Class passengers, which was slipped into a hold-all by a well-heeled passenger, made a riveting £70,000 in March ( ‘some damp staining, but otherwise in good condition for its age‘ as one dealer might say. The only item likely to be worth a great deal more would be the ship’s log, but unless Captain Smith got it smuggled out in another piece of luggage, there is little chance of this turning up in someone‘s attic. Less appealing, but probably easier to find, is a Titanic launching ticket, which fetched £35,600 at the Bonham’s centenary sale. On ABE you can buy a single piece of ‘stationary’ from the Olympic for $300. In my local saleroom Titanic postcards, photos and telegrams come up rarely, but I never bother to inspect them. I guess they must be at the low end of the market, for they seldom make much money.

Anyone with a genuine interest in the social and marine engineering aspects of the Titanic era in luxury steamships, rather than in low-brow memorabilia, should perhaps opt for White Star Line brochures of the period. The most expensive seem to be those that describe the Titanic and her sister ship the Olympic. From California you can purchase for $2,000 a White Star Line brochure of 1912 issued prior to the launch of the two liners . This 24 pages of promotional guff, which included the hubristic buzz word ‘unsinkable‘ to described both vessels, once belonged to the art director of It’s a Wonderful Life, Jack Okey. I wonder if the director of Titanic used something like it to research his box office smash.

For $1,500 a much more substantial item, volume 90 of Engineering Magazine (July – December 1910)—910 pages, including drawings, photos and technical details of the architecture, steering gear, boilers, electrics, etc—of the Olympic class liners, can be yours. It’s lot to pay for what is, essentially, a bog standard magazine of mechanics, but we’re talking about the Titanic here. One of the most interesting features described are the lifeboats and the regulations concerning them. As we know, these lifeboats played a pivotal role in the tragic story.

But the biggest bargain on ABE is probably a first edition of The Loss of the SS Titanic by Lawrence Beesley, which is priced at a reasonable $300. Beesley, a survivor from one of the lifeboats, published his gripping first hand account just nine weeks after the disaster. With its 302 ‘ hair-raising’ pages it remains one of the best books of its type. [R.M. Healey]

Many thanks Robin, topical stuff. I often wonder if these cults will ever end Titanic, Jack the Ripper, James Bond, Baron Corvo, Lawrence of Arabia, Churchill, Sherlock Holmes, Alice etc., As far as I can see only Lawrence (and possibly Churchill) are not going up in value. I am not sure Lord Fellowes new Titanic series helped the cause...See our earlier postings on Titanic collectables for more info, including the strange and rare novel 'Wreck of the Titan' (1898) which predicted the tragedy.

Like other "cult" events, the sinking of the Titanic would not be complete without a conspiracy theory. The indefatigable Robin Gardiner has dedicated more than fifteen years and several titles to establishing that the "unsinkable" did not, in fact, sink. He argues that the Titanic was switched with another liner in the greatest (and, it has to be said, most implausible) insurance fraud ever perpetrated. The Titanic Conspiracy, Titanic: The Ship that Never Sank?, Riddle of the Titanic and others can be found on Amazon from a very affordable £0.01.

"This comparatively petty disaster shocked the whole world, and the shock has not quite died away even yet," said George Orwell in 1940. If I was granted the wish to bring a writer back from the dead and show him the modern world, it'd have to be Orwell. (Or George Gissing.)