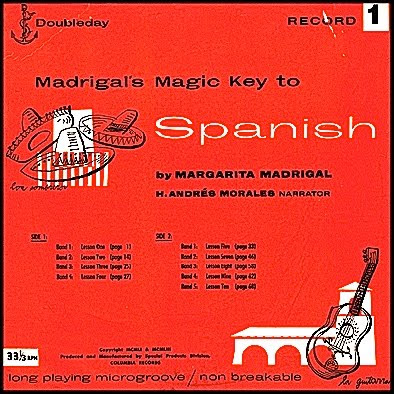 Occasionally I spot the book Madrigal's Magic Key to Spanish (Doubleday NY 1952) and get mildly excited because it has illustrations by one 'Andrew Warhol' and must represent some of his earliest published work. He was 24 at the time. The book is really only worth about $50 in fine shape, simply because there are a lot about. Much, much rarer is the record that came out at the same time and had Warhol's illustrations from the book on the covers of the 2 albums.

A decent copy sold on Ebay last year for $4550. The record was made by the Wible Language Institute of Allentown, Pa. According to the sellers, their copy was in better shape than the one featured in the Paul Maréchal book Andy Warhol: The Record Covers 1949-1987, Catalogue Raisonne, which also stated that the only known copy existed in The Andy Warhol Museum in Pittsburgh. It is not stated whether they had both albums…

At nearly $5000 this must make it one of the most valuable 'talking' records. James Joyce recorded a couple of 78 rpm records in the 1920s. The first in Paris 1924 was of him reading from Ulysses - the recording took up one side of a twelve-inch disc and it 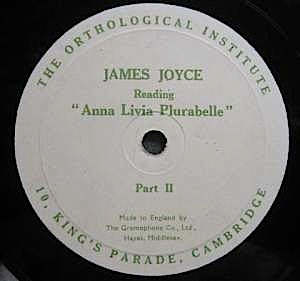 lasts just over four minutes. It was organised by Sylvia Beach through the Paris branch of the Gramophone Company (which owned the label His Master’s Voice) 30 copies were produced and it is extremely hard to find. Beach kept a couple of records herself, and admitted that she later sold them at a stiff price when she was hard up. Value? Probably several thousands, auction records shows merely this related curiosity from 33 years ago:

Joyce's second record was made in 1929 at the Orthological Institute in Cambridge under the aegis of C.K. Ogden. The recording of JJ reading from Anna Livia Plurabelle took up two sides of a twelve-inch disc and it lasts eight and a half minutes. It sold for two guineas (£2 2s), a large amount of money at the time. It sells for towards £1000 in good shape with a decent sleeve and is not scarce...there are five online as we speak and it is an auction staple. 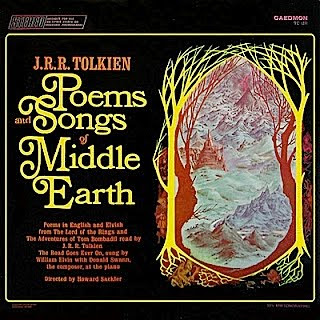 Other valuable talk records include LPs from the literary record producer Caedmon from the 1960s and 1970s. Kurt Vonnegut reading from Slaughterhouse-Five, Cat's Cradle etc., can make £100 or more, Anthony Burgess reading A Clockwork Orange is rare and worth several hundred dollars, William Faulkner reading his Nobel Prize Acceptance speech is exchangeable for a C note. Also collectable and of some value are Caedmon recordings by Tolkien, Dahl, Sendak, Bemelmans, Dylan Thomas and odd items like The Borrowers read by Claire Bloom and extracts from Narnia read by Anthony Quayle. It's a rich field and the records can sometimes be found (overlooked and asleep) mixed in with collections of classical and rock albums.
Posted by Bookride at 4/17/2012

Does anyone know if Jerry Wible who's company did this record is still alive. I last hear of him running the 100 meters in 20 seconds in his 80s and that was 15 years back.

When I was staying with friends in Connecticut during 1990 they proudly showed me their copy of a cookbook featuring line illustrations by one Andrew Warhol.I can recall nothing of this item, since I've never been interested in the artist. Any info would be welcome.

Robin -- that would be his own YUM YUM YUM Book, rather valuable - like his Christmas Book HO HO HO, also costly...