Where do you get these books? 7 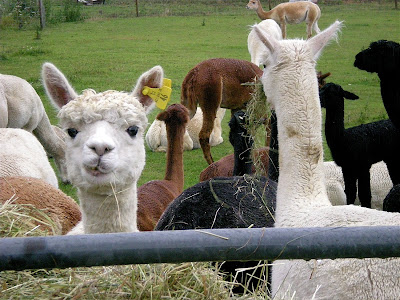 The most recent crazy place that I have bought books was at a Llama farm in Suffolk, England. Mostly they have herds of llamas there and alpaca demonstrations and some very nice clothes that are not cheap. On the rainy summer afternoon that I went there they had a long table full of decent books at 50p each - raising money for charity. Not sure which one --as one who probably buys about £1500 worth of books a year from charity, with very little motive but profit, they all merge into one, I am ashamed to admit. I spent £4 for my haul and put the money in an honesty box. I think one of the books ended up on ABE, a dull but desirable textbook of building practice.

Also in Suffolk nearby is a rubbish dump with a small shop in a large metal container, mostly full of VHR videos, rusting golf clubs and the occasional book--I spend about £3 a month there--mostly in an attempt to keep it going in case something great shows up. In California I came across a very low key web dealer who got almost his entire stock (paperbacks, periodicals and ephemera) from diving into the paper recycling containers at the local site. He carried his finds away on the back of his bicycle in a specially constructed trailer. No one at this eco friendly site seems to object --after all to resell something is to recycle it--that's why secondhand booksellers are such blessed folk. One caveat, however -at many sites the people who work there have first pick and do not look kindly on unannounced dumpster divers.

In the matter of of charity shops it is a sad fact of life that better books (and better clothes) are to be found in the more affluent areas. This has been slightly obviated by charity sellers looking books up on the web and rendering much stock prohibitive to reader and dealer alike. However in an area like West Sussex where there are over 200 charity shops (in an equivalent area in France there would be three at a pinch) you can still find good, if modest, books. We are talking Shelter, Oxfam, Arthritis Research Campaign, Emmaus, Spinal Bifida, Sense, Cat's Protection, RSPCA, PDSA (pets again) Age Concern, Salvation Army, Cancer Research, Marie Curie Cancer Care (an especially worthy cause), Link Romania, MENCAP, Red Cross, St Johns Hospice, British Heart Foundation, Scope, Sue Ryder Care, Alzheimers Society, St Vincent De Paul Society, Mind, Save The Children etc., [below, inside an Oxfam Shop at Didsbury, Oxon) 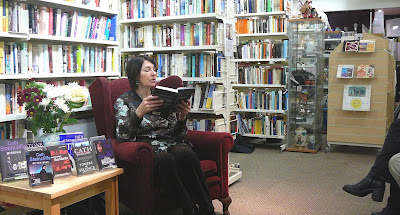 Some dealers gain good karma by advising shops on what prices to put on books--whether out of decency or a desire for first dibs on the good stuff I am never sure--maybe both. Great finds? I did hear of someone finding Durrell's ridiculously rare first book 'Quaint Fragment' (Cecil Press, 1931 - red boards) in a charity shop in Bournemouth or one of those seaside towns where such shops are particularly thick on the ground. I have a feeling it was not a dealer but the shop itself that found it and put it in the rooms where it made £10,000 +. One wonders what other books came in with it...
Posted by Bookride at 9/20/2008