Kevin McCloud in his brilliant recent TV documentary ‘ Slumming It ‘showed how happiness in the world’s biggest slum Dharavi derives not so much from rampant individualism, but more from the mutual support and community spirit engendered through shared space and shared values. Similarly, when sociologists and anthropologists attribute our present sense of alienation to the lack of community spirit---a theory also propounded in books like Tom Hodgkinson’s How to be Idle, and How to be Free, which adopt a mainly Kropotkinite anarchist perspective--- there is clearly something in the air, a sense perhaps that we are in the West at last examining whether membership of an advanced consumer society is what we truly want.

In the early years of the last century, galloping social and industrial changes prompted a similar debate. One of the most influential protagonists was the proto-socialist George Sturt (1863 – 1927),who from his base in Farnham, the former home of that other radical social commentator, William Cobbett, published Change in the Village (1912). Sturt, writing under his pseudonym George Bourne, surveyed Edwardian social and economic ‘progress’ from the perspective of a ruralist looking back to an era before the motor vehicle had ushered in a revolution in the social fabric of rural life. To him the 1880s he knew as a young man was a time when life had hardly changed for the rural labouring class for centuries, where the pleasures they shared remained untainted by industrial progress, and any problems and hardships were overcome, or at least mitigated, through community spirit and cooperation. But Sturt was no sentimentalist, and though he regrets the loss of what he calls ‘ the scene of a joyful and comely art of living ‘ he ( as a good Fabian ) ‘ would not go back ‘.

‘ I would not lift a finger, or say a word, to restore the past time, for fear lest in doing so, I might be retarding a movement which, when I can put these sentiments aside, looks like the prelude to a renaissance of the English country folk ‘


Of course, the Great War put paid to much of that; and perhaps as a response to Sturt and other rural commentators, in the days before and immediately after hostilities, there seems to have been a similar mood of wistfulness towards what was seen as a fast-disappearing world. So look out also for books by Major Gambier Perry, notably The Spirit of the Old Folk (1913), The Pageant of My Days and Allegories of the Land (1912), which come up occasionally. More challenging and a rarer book to find is Old and New in the Countryside (1920), where country house life at the turn of the century is viewed with mixed feelings by the redoubtable lady traveller Victoria de Bunsen, author of the better known The Soul of a Turk (1910). To de Bunsen the passing of the old order is inevitable:


‘ The War has brought everything to an end as we have known it. When the very foundations of European civilisation are rocking, can we hope to retain in its familiar guise any one of the old forms ? Surely the very face of the countryside will wear a different aspect in the time to come…under the engine of man’s rage for destruction ‘ 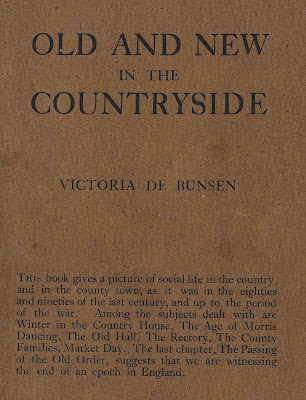 De Bunsen deserves more attention than she has received but Sturt already has a high reputation, largely due to Frank Leavis and his writer-in-arms Denys Thomson, who played his wholesome rural values against rampant modern consumerism in their writings. And although Leavis the literary critic has been deeply out of fashion for many years, his promotion of Sturt seems to have paid off. ABE is crammed with various editions of Change in the Village and The Wheelwright’s Shop including some from the Caliban Press, which has been bringing out editions of Sturt for over thirty years. About four years ago I was thrilled to pick up for a mere 90p my first of Change in the Village in a charity bookshop. The only first of this title in ABE at present is priced at $112.There are firsts of two rare titles, The Ascending Effort (1910), a book on aesthetics, for £25.50 and an ex- library copy of William Smith, Farmer and Potter (1919) for an eye-watering £40, though this price reflects its strong appeal and rarity. I paid £1 for my copy years ago, but I was very lucky. [R. M. Healey]

Thanks Robin wise and timely words. I shall keep an eye out for these three. I note that Victoria de Bunsen came from a grand but radical family -- she was the sister of philanthropist Charles Roden Buxton who lived such a frugal lifestyle that, on walking tours in the south of England, he was sometimes mistaken for a tramp. This often happens to bookdealers down on their luck.

When this recession finishes (if it ever does) I trust that the renewed interest in community, altruism and less materialistic ways of living does not end with it. Let’s hope we don’t return to an era of total bastards in red braces swigging Bollinger and charging round in Aston Martins. Good to hear the sacred name Major Gambier Parry—I have a feeling I have a few on the net that could be repriced!
Posted by Bookride at 2/24/2010