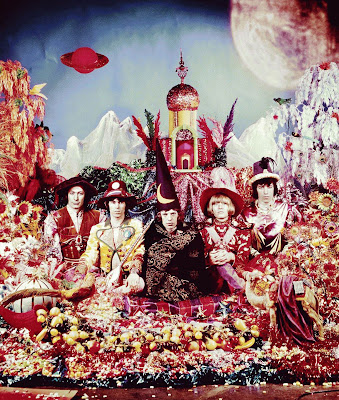 The image above is Michael Cooper's shot for the Stones Satanic Majesties album. If you click on it goes to a good size and you can make out the faces of John, Paul, George and Ringo to the left and right within the gilt encrusted psychedelic decorations. Cooper was one of a handful of elevated souls who were friendly with both groups. His self portrait shows a wistul groover almost Edwardian in his striped blazer - like something out of Kind Hearts and Coronets or Mr. Polly. Terry Southern said of him -“Michael Cooper was a person of tremendous love and vision...I do not expect to see his like again.”

In 2002 we catalogued a copy and after a few months (and some haggling) sold the black and yellow opus for £400. We catalogued it thus:

Michael Cooper. BLINDS & SHUTTERS. Genesis/ Hedley, Guildfrord, 1990. 4to. 368 pages. 14" x 10" Hardcover leather/buckram in yellow and black in a matching hand made silk screened solander box. Limited edition of 5000 copies of which this is No.3087. A weighty photographic record of Michael Cooper's work. Michael Cooper was a 60’s beautiful person (obit 1972) and friend of the Rolling Stones, Robert Fraser etc., Every copy has at least 9 different autographs of subjects with Bill Wyman being the only constant. This copy is signed by David Hockney, Don Bachardy, Jenny Boyd, Spencer Davis, Terry Doran, Derek Taylor, Harry Nilsson, Adam Cooper, Bill Wyman and Colin Self and Ann Marshall. Solander box has liftable flap at centre - each copy having different small photo beneath - this has Marianne Faithful with bespectacled man. Book is about fine, box is slightly rubbed at corners o/w also about fine. A lavish production and the ultimate record of this gilded period.


No two copies are alik 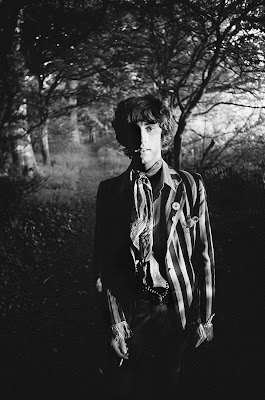 e and the value depends on who signed your copy + the photo under the liftable flap (Beatles are best.) Here is a random list of signers from copies I have seen. It is unlikely to be comprehensive and we would welcome news of any other signers. A merry galaxy of 60's movers, shakers, posers, celebs and characters:

Francis Bacon is possibly the Button Gwinnet of the pack, although it is said that the Warhol signature does most for the value of the book. Colin Self is the second most common and Peter Blake manages to get his oar in on most copies. I have heard of a limited edition of 250 copies lettered in roman numerals but it doesnt seem to differ in any way.

VALUE? The book can go for anything from £400 to £2000. A chancer on Amazon has one one at £2500 with Burroughs as one of the signers--he claims that WB signed very few. The number of people willing to fork out 50 hard won £50 notes to get at Burroughs signature is likely to be miniscule...Warhol's signature has a proven track record of turbo charging the book towards £2000. Beatle signatures are good, Keith Richards probably helps and Bacon is a name to conjure with.

OUTLOOK? Good. Even though there are 5000 out there they are actively traded and possibly growing in value. Ebay sees copies occasionally and multiple signed books tend to work with the punters there. Some people don't like Genesis books at all and they can be slow to shift unless you have the right ones, or the de luxe issues. They are seen as books for unsophisticated, celebrity obsessed arrivistes. For myself I am glad to buy them and also glad that the publishing company are vigorously knocking out new titles When buying them it is always worth checking with Genesis to see if they have any left. Blinds and Shutters is long gone however. The average age of collectors is about 40 and when these collector retire, move or die many copies may start to surface and some titles could prove a poor investment. Left is a photo of the unforgettable Talitha Getty leaviing a party with Stash (Stanislas) de Rola, princely son of Balthus. It is almost certainly not by Cooper, but the work of a nameless paparazzi, but it sums up 60s high style--these guys didn't get their kit from Gap. Photo removed by a noilly prat...as Logue said 'we will not argue about it in eternity.'
Posted by Bookride at 2/26/2010

as warhol was dead by 1987 how long were these books in preparation for?

I have a copy signed by Bill Wyman, Colin Self, Neil Aspinall, Adam Cooper, Terry Doran, John Mayall, Pa, Spencer Davis, Ann Marshall, Marianne Faithfull, Julie Driscoll and Brian Auger. In great shape. If I decide to sell I will try to let you know. Hamish

I have never seen the Warhol doubted so they were probably sending round signature sheets for about 5 years but I don't have chapter and verse on this.

I have a copy I'm about to put on Ebay. I'm not sure who all signed it, but I know Eric Clapton and George Harrison. Also, this is copy number 92 from 5000 sold. The 3 x 3 pic on front is John Lennon and Yoko Ono. Look out for it on Ebay soon if you are interested.
dhopkins77@hotmail.com

Ron Wood has signed a very few copies and originally by accident, as he wasn't supposed to.