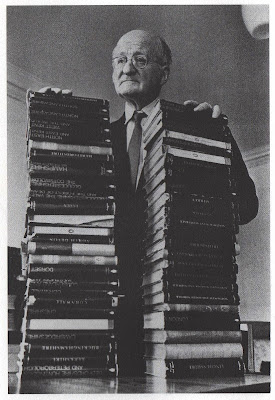 Is it in Pevsner ? What does Pevsner say ? Cries often heard among amateur architectural historians, church crawlers, and prospective owners of any building looking ‘ a bit Regency ‘, ‘ definitely Georgian ‘ or ‘possibly by Lutyens’. If it does turn out to be in the great man’s magisterial Buildings of England, or in the follow up volumes that dealt with the rest of the UK, there’ll doubtless be a premium to pay, though most house buyers would be happy to shell out for the privilege. Twenty seven years after his death Pevsner, the German-born workaholic, has become a national treasure about whose life few but his closest friend knew much at all. But now with the news that the long-awaited ( it was expected to appear in 2002 ) biography is due out later this year, any one who was ever curious about what drove him to complete one of the most celebrated series of books in the history of publishing will be able to find out.

Immer fleissig perfectly suits Pevsner, the assiduous Herr Professor Doktor of Betjeman and of every post-war anti-German chauvinist who ever resented the fact that six years after we defeated the Jerries a damned German was showing us how to appreciate our own buildings, some of which, ironically the Germans themselves had flattened. But the truth remains that had this Jewish academic never fled Hitler for England it is unlikely that any Englishman 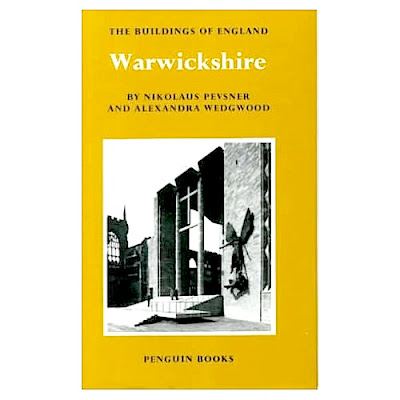 would have had the energy or chutzpah to take on such a necessary job—certainly not the slowcoach Howard Colvin, for all his erudition, and probably not Ian Nairn, who for all his brilliance, would have devoted too much time sampling the local brew.

Although the idea behind The Buildings of England was first mooted in 1936, it took until the Festival of Britain year of 1951 for the first title to appear. Pevsner had already had a hand in the series of King Penguins and Penguin Modern Painters and so for him to take charge of a series devoted to the architecture of Britain must have seemed a logical next step for the marketing men at Penguin. But to create the format that they did was more than shrewd marketing—it was a stroke of design genius. Part of the appeal of the volumes is their size and format. Pevsner’s only rival in the architectural field at that time---the pre-war Shell Guides and their successors, the Murray Architectural Guides---were closer to being coffee-table art books than the hold-in-your hand guides they aspired to be. Moreover, they were too expensive. The paperback format, cheapness and sheer utilitarian drabness of the Buildings of England volumes, with their truly execrable paper and po-faced snaps of buildings, perfectly suited the era of post-war austerity. You could slip a copy in your pocket as you trudged across fields in search of that castle or ruined church. And if a page got torn or if you dropped the book in the mud it didn’t matter much.

The men at Penguin were so confident of success that, according to one source, they printed 20,000 copies of the first few titles, which explains why copies of Cornwall, Nottinghamshire, Middlesex, North Devon, South Devon, London, Hertfordshire, and Derbyshire are so easy to 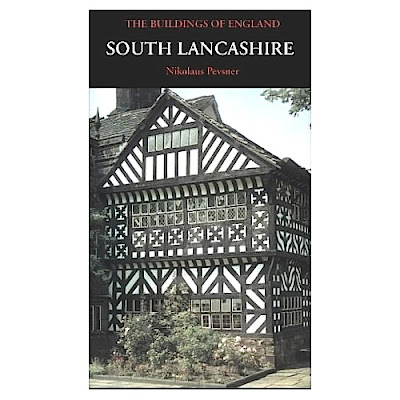 find. The earliest titles were priced at 3/6 and don’t appear to have been issued with jackets—at least I’ve never seen one—and the addition in 1954 ( for Essex )of a pictorial jacket for the paperback seems to have coincided with the introduction of the cloth-bound edition ( also with pictorial wrapper )to be published alongside the paperback version for a few more years.

Sales were slow at first but gathered momentum as word got around. Then, as the volumes got fatter, more informative and more expensive, the less informative Shell Guides remained dearer still, and proved less popular, though they were, as always, much more attractive visually. By the sixties the Shell marketing men , nervous at falling sales, considered closing the Guides down and Betjeman ( though not Piper, who was a friend of Pevsner’s ) became more irritated. Within twenty years the whole of England had been covered by Pevsner and his team ( not something that could be said of the Shell Guides )and the process of revision began. Prices rose to match those of the Shell Guides until in the eighties they exceeded their rivals in price. Today, titles in the Pevsner Architectural Guides series retail at around £35 new, though these are sometimes to be found modestly discounted. Pevsner would have been astonished at these high prices, but perhaps would have been equally proud that few would baulk at paying them. Such is the price of success.

Rare Pevsners ? Probably few, if any. Discovering very early titles with jackets would indeed be interesting , but the 1700 listings in ABE throw up nothing of the kind. Don’t expect to pay more than £10 for a paperback with a wrapper, or £20 for the fattest hardback in good condition with wrapper. Doubtless there are some ‘points’ to be hunted down in certain titles. My copy of Durham, for instance, has blank pages regularly interspersed throughout, as if for note-making. Perhaps it was a one-off. Perhaps not. [R.M.Healey]

Thanks Robin. ABE does show a few sell by numbers chancers asking over £50 but most keep them reasonable as there are a lot about. I remember a guy at a provincial fair putting out a box of fifty for £1 each. He was a children's book specialist and knew no better -- they went like snow off a dike as they say in Canada. Pevsners are a useful weathervane of a shop's pricing policy—if the dealer regularly charges over £15 (unless it is the actual county you are in or they are brand new) he might be a difficult type, possibly mercurial in temper and everything could be similarly overpriced—if his Pevsners are over £20 take it as a warning, if £25 or over leave fast without engaging in idle chat. Do not return. Of course if they are signed by Pevsner or annotated by Betjeman or Ian Nairn then stroppy prices may be in order...
Posted by Bookride at 2/13/2010

Edifying stuff. As for pricing you rightly suggest avoiding the £20 merchants--likewise embrace the guys who price them less than £10, other bargains and reasonablly priced books will be found, plus there will be a good influx of books--due to cash flow, as opposed to the stasis you get with overpricing. Trust me I'm an accountant.

My shop has one tatty Cornwall P/back at a fiver ... does that make me cheerfull & shop packed full of bargains or am I just rubbish at finding good books ?

Very interesting piece. I've just completed Pevsner's biography and found him writing that his original aspiration was for every schoolboy to have his own county's volume in his mackintosh pocket. So he would have entirely applauded your view that it didn't matter if you lost a couple of pages in the process or dropped a volume in the mud. He'd probably have enjoyed being a benchmark for pricing in bookshops too, rather than just a useful tag in estate agents' vocabulary.

My paperback copy of London BE6 published 1952 has a red dust wrapper. I suppose it is possible that the wrapper could have been transferred from a later printing, but there is nothing to indicate that.