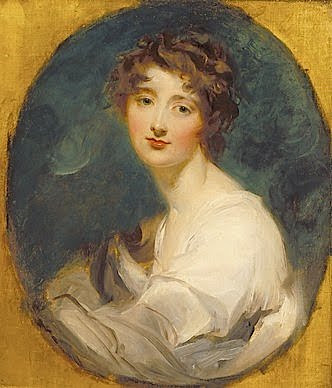 I was intrigued by a chapter in Memoirs of Harriot, Duchess of St. Albans (Colburn 1839) headed 'Literary Swindlers.' In 1822 the former actress Harriot Mellon (1777 - 1837) had inherited over a billion pounds in today's money from her husband Thomas Coutts, the banker. She went on to marry the 9th Duke of St. Albans a man 20 years her junior. She left her vast fortune to Coutts's grand daughter the philanthropist Angela Burdett-Coutts to whom she was very close. Harriot's fortune made her a target for a species of literary swindler who probably still exists today in some form. Harriot had lead a colourful life and there were many rumours about her origins and her career so writers were able to concoct 'a shameless mass of falsehoods' about her. As Mrs Baron-Wilson, author of these memoirs, puts it 'Mrs. Coutts being regarded as a female Croesus...was assailed by the lowest order of literati.'

The first chancer, one Mitford, demanded a £100 for the copyright of his manuscript. On being refused he found a publisher but 'the source was too polluted to prove injurious to any but the parties who brought it to light...soon after this Mitford died in abject poverty in St. Giles's workhouse.' This was a world much lower than Grub Street and largely unrecorded, it is likely that many of these writers met equally ignominious ends. There were many attempts, one by a Church of England clergymen and in one case Harriot grabbed the manuscript off a 'well dressed' blackmailer and threw it in the fire. She was from the 'publish and be damned' school and several lewd and spurious accounts of her life actually made it into print including A tale of the last century. The Secret Memoirs of Harriet Pumpkin, a celebrated actress ... By the Ghost of old Ralph. An exceedingly rare book, probably now worth much in excess of the money the swindling author received...

The modern equivalent would have the material on his Iphone and threaten to press the send button to his blog unless paid for his hack work. [To be continued with consideration of the real Charles Augustus Milverton, blackmailer to the PRB, a recent £700 8 volume work Whore's Biographies, Irish literary blackmailler Thomas Ashe and of course the grandest of grandes horizontales the courtesan Harriette Wilson...]
Posted by Bookride at 7/18/2010

You are right about "Harriet Pumpkin". It is rare with only 2 copies showing up in libraries --one in USA and one in Britain. Full title is: " A tale of the last century : the secret memoirs of Harriet Pumpkin [i.e. Harriot Mellon, afterwards Coutts, a subsequently Beauclerk, Duchess of St. Albans], a celebrated actress, from her infancy to her seduction of, and subsequent marriage with a banker : also, a poem by the father of our heroine ... with a variety of amatory anecdotes, and illustrative occurences." Keep up the good work.