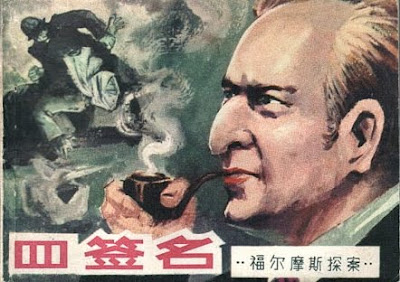 I have been thinking about Conan Doyle this week and the failure at auction of a fine first signed presentation of A Study in Scarlet. It was bought in at £250,000. Possibly the Sangorski rebind was a good excuse not to buy it, a limpid wraps copy inscribed would surely sell. Possibly a warmer inscription or a presentation to a fellow explorer of the spiritual realms-someone like Madam Blavatsky or the boy avatar Krishnamurti would have carried it over the finishing line. The inscription read - "This is the very first | independent book of | mine which ever was | published | Arthur Conan Doyle. | Jan 9 / 14".

There must be several thousand Sherlockian punters worldwide but sadly (for the seller) not one of them with a few hundred grand to spare for the great 1887 Beeton's Christmas Annual. One dealer I met took it as a portent--he also cited a lacklustre Churchill sale and major botanical books that were making less now than in the early 1990s without even building in inflation. 'Prices are dropping like stones' he mused. All is not lost, price changes can often be explained by shifts in taste and one can see new auction records being broken almost weekly in the field of fine modern first editions in fine jackets or with great inscriptions. Follow the money --as the swindler might say.

My favourite Sherlock story is Charles Augustus Milverton. Holmes, master of disguise, in pitted against the evil and resourceful Milverton - a pitiless blackmailer of noble women. Holmes disguises himself as a plumber and heads to Hampstead, where he courts Milverton's housemaid, even managing to become her fiancé. The character of Charles Augustus Milverton was based on a real blackmailer, Charles Augustus Howell, an art dealer who preyed upon an unknown number of people, including the poet Dante Gabriel Rossetti. Not quite a literary swindler, although he may have trousered some of Ruskin's money. His biographer Helen Rossetti Angeli, could find no evidence to support accusations of blackmail. There is a fine Beerbohm watercolour of him eavesdropping at a door while his lover while Rosa Corder forges Rossetti drawings. He is said to have been involved in his friend Felice Orsini's attempt to assassinate Napoleon III in 1858 and to have persuaded Dante Gabriel Rossetti to dig up the poems he buried with his wife Elizabeth Siddal. His death was equally macabre -he was found close to a Chelsea public house with his throat slit, and a ten-shilling coin in his mouth. There is a suggestion he may have died elsewhere. The ten bob bid treatment was apparently reserved for those guilty of slander. 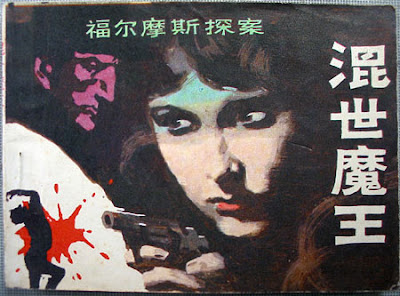 Ruskin, rich in his time, employed him as a secretary between 1865 and 1868. He trusted Howell with "affairs needing delicate handling and a wise discretion..." - mostly to manage his discreet charitable donations. Howell sought increasingly to obtain complete control of Ruskin's finances and Edward Burne-Jones persuaded him to sever his connection with Howell. Whistler thought he was a fine fellow, however, a "wonderful man...genius...splendidly flamboyant." [To be continued.] Pics from Chinese 1980s Sherlockian graphic novels including 'Charles Augustus Milverton.'
Posted by Bookride at 7/25/2010

Re that Beeton's - how many books EVER sell at GBP 250,000 or above? The reality is that it's just the highest end of the market, and thus not much to be read into it. I don't think ANY Sherlock Holmes book has sold at that price, or even close to it.

And a couple notes - binding is by Zaehnsdorf, not Sangorski and the bidding ended at 240,000 pounds

hmmm nice one..
wish to have more posts
i wanna be a top model of the world... my one short movie is here Watch online Hollywood Movies

Slightly surprised that investors weren't more interested as it is precisely these top-end rarities that pay dividends in the long run. I assume Sothebys based their £250,000-£400,000 estimate on the $150,000+ made for an uninscribed copy in 2007 - which seems reasonable but for the fact that 2007 was probably a market peak. Always tough to value these unique (or nearly-so) items.

Once I handled an inscribed copy of Houdini's A Magician among the Spirits [1924], in which the master of illusion & sleight of hand debunks Spiritualism. And who better for the task? I believe I described it as nearly the most important association copy imaginable. It was inscribed to Houdini's collaborator & co-author on the book, an haute Edwardian gentleman with a walrus moustache, whose name escapes me now. I flogged it on eBay & notes from various Houdini enthusiasts made it clear that this man was the Watson to Houdini's Holmes. I was trying to max out the Benjamins, & uncovered the assertion that Conan Doyle & Houdini had been friendly, but wound up on opposite ends of the Spiritualist debate. [Conan Doyle had lost a son, Kingsley, in the Great War, which allegedly led him to grant vast credence to the spiritworld.] This rift put paid to the friendship between the two. Ever since, venal book dealer that I am, I have imagined the killer association volume, between Conan Doyle and Houdini. An excruciatingly ornate poison pen dismissal, or a grand & gentlemanly gesture of acceptance of possibility, from either side. This seed of an idea is rather more than any Matthew Pearl bestseller hangs by, in my estimation. But I'm not going to write it. I'm not quite that interested. Hey, steal this book. In any case, my inscribed Houdini book made $3000 on eBay in about 2003. (I paid $700, at auction, among book dealers. The copy was gratuitously described as "defective" because of one signature that was supplied in facsimile. I later found that this "signature" (a quire of pages) was never bound into any copies of the book, a bindery defect which occured throughout the whole of the first edition.)

Thanks Jared. The Houdini book sounds like an Ebay special and the point about the missing pages is worth remembering. If Scarlet had been inscribed to Houdini surely it would broken the land speed record...the inscription might read 'To Harry Houdini with respect and affection--one day you will go too far. Arthur.'
Wouldn't even need to be fine.