A name I’ve invented to describe a category of book that Private Eye parodist Craig Brown has admitted to collecting. ‘Sometimes I wander around bookshops like a stalker looking for victims‘, he told me in 2003. One of the prized books in his working library is Kim Il Sung’s snappily titled The People’s Movement is a Mighty Anti-Imperialist Revolutionary Force, of which he admits there are probably ‘ten million floating around ‘. Possibly true, but 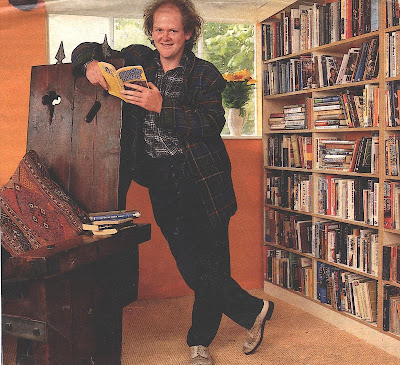 perhaps most of them are still in North Korea. Certainly, ABE has none at present. Brown also owns two ghosted works by Robert Maxwell, whose Pergamon Press once brought out books by all the East European dictators. Brown admits that a good collection could be made of these hagiographies. Reggie Kray gave him a signed copy of his Thoughts, Philosophy and Poetry (1991), which according to one dealer, who charges $152.71 for his copy, is ‘scarce.' Enoch Powell’s Collected Poems (1992) is easier to find at around £8 and is worth tracking down to read what Brown found to be ‘very homo-erotic’ verse. Eroticism of a more conventional type also made Brown laugh. The romantic novelist Melvyn Bragg ( whose early firsts hover around $5 ) is a ‘parodist’s dream—very sub-D.H.Lawrence’, Brown thought. Bragg’s female equivalent in the romance stakes, Barbara Cartland, was another favourite of Brown’s. He once owned a copy of her booklet entitled How I’d Like to be Remembered, which the fragrant Babs used to send to anyone who wrote to her. This was bound with a red ribbon, Brown recalls, and was basically just a ‘ long list of her achievements ‘.

Actor, film director ( The Stepford Wives, Whistle down the Wind ), and now thriller writer Brian Forbes wouldn’t mind me saying that he is vertically challenged. Napoleon Bonaparte was too. I’m not saying that there is any connection between these two very different men, but the fact remains that Forbes is a dedicated collector of books about the French Emperor and binds each new book he acquires in the same red morocco, thus obscuring any trace of the book’s qualities as an historical object.
Forbes has bound several valuable volumes in this bizarre way, including Barry O'Meara’s Napoleon in Exile (1822), which fetches between $300 to $500 today. As any bibliophile knows, such a practice will reduce the value of Forbes collection, should he ever fall out of love with the Corsican warmonger . There is a moral here. Resist the temptation to rebind rare and valuable books that are still in their original cloth or boards-- unless they are actually falling apart—and by falling apart I don’t mean that one board is detached and there is a loose gathering.

Leather-faced Stone Keith Richards, according to his recent autobiography, once wanted to be a librarian, and later on began organising his huge collection of books at his homes in West Sussex and Connecticut using the Dewey Decimal system. Most know him as a collector of Nazi memorabilia of all kinds, including books and pamphlets, but it would seem that we have been 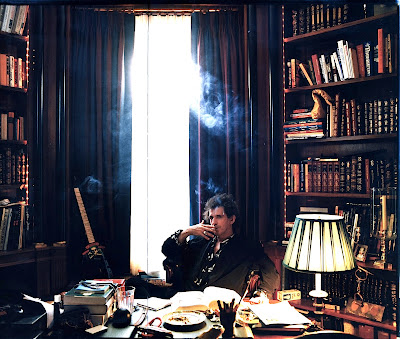 underestimating the former hell-raiser. His special areas of interest now include the early history of American rock music and the Second World War ( though I suppose this would overlap with the Third Reich ). ‘ Lemmy ‘, from popular heavy metal band Motorhead, is so proud of his collection of daggers, guns, flags, officers’ caps, and insignia from this era in German history that he has posted photos of himself with his collection on his website. I peered at these pictures intently, but try as I might I could see no books. Perhaps Mr Kilmister keeps them all in his library. Or perhaps not.

No apology for including this pioneering Victorian decorative printer again, as Battie and Gascoigne ( and doubtless other celeb collectors) are great fans. Battie used to pick up Jones and similar colour printers for next to nothing when Victoriana was out of fashion. The plates in his copy of M. A. Bacon’s Winged Thoughts ( 1851 ) were the work of Jones, who also created the embossed binding of gutta-percha. Battie paid £12 in the sixties for his copy of Jones The Preacher, with its binding of burnt wood. ‘A great deal of money', he admits. Such high Victoriana has not kept its value, even though examples of it aren’t common. I bought a copy of Jones’s splendid Spanish Ballads for a mere £3 recently and his books can be had for sensible prices on ABE.

Back in 1998 Iain Sinclair reckoned it was a ‘ racing certainty ‘ that the hitherto unrecognised poets of the period 1966 and 1979—men like Tom Raworth, Pete Brown. Michael Horowitz, Eric Mottram , J.H.Prynne, Andrew Crozier, Peter Riley and Douglas Crozier---would see their work revalued and therefore sought after in the years to come. Well, 12 years have passed since this hot tip, so have things progressed ? It’s a bit patchy.

Most firsts of Raworth on ABE are priced at around $20, while the undervalued Riley hovers at around $15, with rare items going for $40. Douglas Crozier seems to have disappeared, while Andrew’s limited edition firsts are priced at $20 or less. However, early, limited edition works from the seventies by the ‘ austere ‘ (some say unreadable) Prynne, rated by one dealer as the ‘towering poet of the late 20th century', are rather pricey at $60 - $75. So perhaps Sinclair was right about him.

Germaine Greer is a dedicated collector of female poets, especially of the seventeenth century. She once spent £1,000 on eighty volumes of mainly seventeenth century poetry at a country house sale in Wales. Rarities included a posthumous Hudibras, which Cambridge University Library didn’t have. Greer admits to not taking sufficient care of the rare volumes she has bought. Years ago, when she lived in Italy, she was sent slim volumes by lady poets from Heywood Hill, many of which ended up being eaten by insects, including scorpions. [R. M. Healey]

Thanks as always Robin. I also had a slight brush with celebrity when I was invited to Brian Forbes's Surrey villa to buy a load of books. A pleasant man, also an owner of a bookshop himself, he showed me his Napoleon collection - vast and impressive. I recall him talking about comedians he had directed and saying they were mostly desperate types. I bought a signed set of Roald Dahl off him, oddly uncommon. In France Forbes is regarded as one of our great directors (top movie -the moody 'Seance on a Wet Afternoon')- as an actor he is memorable for playing superb spivs. Iain was right about Prynne, his books unless grievously overpriced go, as they say in Canada, like snow off a dike.
Posted by Bookride at 9/19/2010

I think by Douglas Crozier you must mean Douglas Oliver. Surprisingly little on ABE and that mostly from US dealers.

Early editions of Iain Sinclair himself have probably done better than the authors he recommended.

Unless memory serves me ill, Conrad Black, long before he went to prison, was a great collector of books and other material about Napoleon. I was once told by a bookseller I knew, a bookseller who went on to work for Black, that Black also had a portrait of himself dressed as a Napoleon. I was told that story about Black in the 1980s. The portrait itself was enough to convince me he was as megalomaniac as the other two newspaper barons of the late twentieth-century, Murdoch and Maxwell. That neither of them has done any time inside is a crying shame.

Had he lived Maxwell would have done some porridge (surely?)

Back in the 70s the North Korean government gave away loads of copies of a hagiography of Kim Il Sung to libraries in Britain and presumably elsewhere. It was one of the maddest books I have ever read. It has loads of photographs of Sung giving 'on the spot instruction' to small groups of scientists, doctors, shipbuilders, peasants etc. Several of the group members look terrified - as they had good reason to be.

No one has any real notion of what's  worth holding onto for 'investment' (ha). I have a Linda McCartney cookbook inscribed by Paul McCartney with love hearts either side of Linda's name on the TP with love hearts. The provenance is impeccable and the value is now quite high but in 20 or even 10 years? Most teenagers have no idea who John Lennon is (and can't identify him from a photo) and Paul is some weird dinosaur that old gits like. That generation will likely not be buying Beatles memorabilia in a few decades, but who knows? Thank goodness I won't sell it!

Have you done any posts on books with improbable provenances? These can be fun. I'm fairly new to your site and so don't know.

Isn't it (fittingly) somewhat Napoleonic to want to rebind every book uniformly in massed ranks?
No doubt these books gradually conquered his whole house until their final exile - some of his modern firsts are in the latest Sotherans catalogue.

Nigel:
I too bought some books from Bryan Forbes back in the early 80's. I was a rep for Gollancz and called on his Virginia Water Bookshop regularly where he had installed a pretty decent manager, Patrick Glasheen, who kept the shop up to scratch. Patrick told Bryan that I was a dabbler in crime fiction and one day he drove me round the corner to his pretty impressive house down a private road where he wheeled out a complete set of Ian Fleming firsts (but NOT including Casino Royale). I can't remember how much I paid for them now but it was pretty much the last time I had the second, third and fourth Bond in anywhere decent condition.
The highlight of the visit however was catching sight out of the corner of my eye of the fragrant Nanette Newman (Mrs Forbes) up to her elbows in soap suds at the kitchen sink. I guess it was all those free Persil bottles she was desperately trying to get rid of...

Ralph. For some reason I too have a memory of Nanette Newman washing up when I was there. Certainly a cup of tea was produced. I may have dreamed the rest. I last say Forbes alighting from a cab in Knightsbridge wearing a dinner jacket and accompanied by variously sleekly rich oldsters, possibly royals or plutocrats.

"The British Tory press sometimes depicted Napoleon as much smaller than average height, and this image persists. Confusion about his height also results from the difference between the French pouce and British inch—2.71 and 2.54 cm respectively; he was about 1.7 metres (5 ft 7 in) tall, average height for the period."