A – Z of Celebrity Book Collections

One of the few book dealers to become a celebrity is ‘ King ‘ Richard Booth, the founder of book-town Hay on the Welsh border. I remember buying from him as a teenager circa 1970 when he would suddenly appear at the counter of the Old Cinema and price books on the spot that you’d chosen. He had the reputation for buying in huge quantities back then, but when I 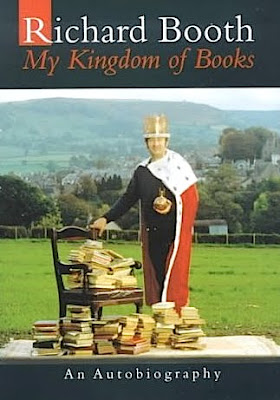 interviewed him in 2004 his appetite seemed undimmed, despite the debilitating effects of a brain tumour. ‘ I personally drive a two-ton van ‘, he told me, ‘ and travel all over the north-west. I still offer competitive prices for quantity…I will buy a ton of books, where other dealers will turn away ‘. He also revealed that he was seriously considering moving from Hay Castle to set up gigantic book warehouses in Eastern Europe. ‘At Wadlstadt-Wunsdorf, a big army base near Berlin’ he revealed, ‘, there are fifteen disused supermarkets which could be filled with books from America for distribution to the ten new Eastern European countries ‘. He even half-joked that a statue might be erected to him there to replace the one of Lenin.
I don’t know whether, six years on, Booth has gone any way towards realising his dream , but you can’t fault the man for ambition.

Very recently I learnt that a friend had bought a volume bearing the bookplate of the late Michael Foot. We now know that in 2004 he pledged his unique Hazlitt collection, which included rare signed copies, to the Wordsworth Trust. But what happened to the rest of his large and impressive library of works on English political radicalism ? This contained rare pamphlets and radical newspapers from the Golden Age and I daresay his collection of Cobbett even surpassed that of Richard Ingrams. Years ago I tried to arrange an interview with Foot , but I’m not surprised that he turned me down. He was then in his mid eighties and lived alone, circumstances which present security problems.

The late lamented Frank Muir, a passionate book collector, was a great admirer of this Irish writer, of whom Cyril Connolly wrote: ‘ She has given more indecent pleasure than any living novelist.’ The Inklings, Aldous Huxley and John Betjeman were others who sought out her work, which may have been easier to come by in the twenties. Simon Brett, who was given a copy of the 1926 Nonesuch edition of Ros’s Irene Iddesleigh by Muir, called her ‘ possibly the worst novelist ever to be published ‘. The words ‘ high-flown ‘, ‘ alliterative ‘ and ‘ melodramatic ‘are used by literary people to describe her unique style. For instance, this is how she tells her readers that her heroine earned money through needlework:


‘She tried hard to keep herself a stranger to her poor old father’s slight income by the use of the finest production of steel, whose blunt edge eyed the reely covering with marked greed, and offered its sharp dart to faultless fabrics of flaxen fineness.'

Reading Ros is still a secret pleasure that many writers keep to themselves, and it has been impossible to keep the prices of her novels and two volumes of poetry at an affordable level, such is the demand for her books. It’s odd that no-one has had the wit to republish all of them in full. The absence of such reprints may partly explain why her addicts are loath to part with any of her books that they might be lucky enough to find, which could explain why ABE have so few titles at present Maggs want $822 for a first of Delina Delaney and until recently Jarndyce was offering the exceptionally rare first of Irene Iddesleigh (1897 ) at $206, which is only $5 dearer than the Nonesuch edition for sale at the same time. When you consider how hilarious Ros is, these prices don’t seem too much to pay .

Lord Baker owns some separately bound Shakespeare plays from the First Folio as well as the exceedingly expensive ( £100,000 + ) King James Bible of 1611, though of course the Bard himself would have relied on the earlier Geneva Bible as a source.

Celebrity admirers of these classic guides include Oldie editor Richard Ingrams and Jonathan Meades. Ingrams knew the general editors Piper and Betjeman personally and owns a fine collection, including some of the rare spiral-bound editions. Jonathan Meades, who once contemplated writing a Shell Guide himself has a favourite in Dorset by Michael Pitt-Rivers. He also admires the two principal photographers, Edward Piper and Edwin Smith. To Meades, Edwards’s photographs in Buckinghamshire (1981 ) make it appear as though the whole county ‘ was going to suffer an electric storm at any moment...' The Guides have now become iconic and their prices are rising. Less than ten years ago most of the spiral bound editions of the thirties could be had for under £20, but the trendiness of twentieth century British art has seen Shell Guide prices shooting up, particularly those by leading British artists, such as Piper and Paul Nash. At present ABE has no copy of the latter’s Dorset –always a rarish title—which can fetch over £100, and John Piper’s Oxon (1939) is nearly as expensive. So if you are lucky enough to discover a spiral bound Shell Guide in a jumble sale ( as I did once ) count yourself extremely lucky.

Hollywood star Nicholas Cage is said to own one of the largest private collections of comic books in the world. Bespectacled former surgeon 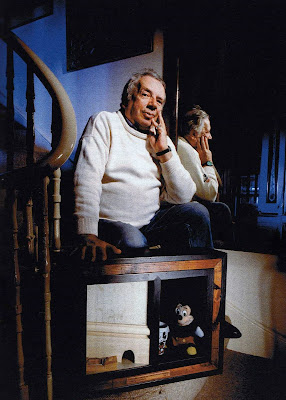 Harry Hill is a comic who collects comics. Felix Dennis regrets selling his collection of action comics in his youth but now owns a vast collection of original art work, which he houses in his Warwickshire home.

The late George Melly, jazz singer extraordinaire, owned a fine collection of surrealist paintings, many of which he had to sell. He has also parted with valuable books in his collection, including Max Ernst’s Histoire Naturelle. Back in 2003 he was philosophical concerning the fate of his library after his demise.’ My wife will probably sell them ‘, was his assumption. Poet David Gascoyne, author of A Brief History of Surrealism and Man’s Life is This Meat ( a title given to him by Geoffrey Grigson ), also had to offload most of his surrealist paintings when strapped for cash, but hung on to most, if not all, of his books on surrealism. Celebrity zoologist Desmond Morris, whose great great grandfather was a bookseller in Swindon, is both a surrealist painter and a connoisseur of books on the movement, and the author of a catalogue raisonné (?unpublished) of his hero Joan Miro. One of his rarest volumes is Conroy Maddox: Surrealist Enigmas, edited by Sylvano Levy, which appeared in a limited edition of just twelve. [R.M.Healey.]

Many thanks Robin. Modest of you not to mention that the Shell Guide to Hertfordshire is your own work; must get mine signed. Michael Foot was a great bookshop habituée and is much missed. We nearly bought the library of his nephew Paul Foot--a great collection of radical literature, but the family decided to keep it. Possibly the same thing will happen to Michael Foot's books. Amanda Ros has become a standard collectable but I am not sure if she has a new generation of punters. I sold my own copy of her St. Scandalbags last year and deeply regret it. As for Nicholas Cage, occasionally seen in Charing Cross buying Illustrated books, I heard that he had sold his comic collection and much else due to a very nasty IRS bill. Parts of Melly's library have surfaced in various shops, mostly in Chelsea. As for Shell Guides we will not mention the severe overpricing of them in the Bournemouth area...
Posted by Bookride at 9/26/2010

Fascinating stuff as always and an eye-opener for those like myself who have specialised for so long that one wonders what gems I might have passed over in the trawl through the bookshops over the last 40 years.
Talking of old Marxists: Dennis Healey is a figure I have bumped into here in the South-East, both times at Camilla's Bookshop when it was situated in Brighton and one assumes that his collection of photography books may be pretty impressive.

Are there two guides to Dorset, then? The one I know is by Paul Nash.

Indeed there were two Dorset Shell Guides. Nash's from 1936 and 30 years later Major Michael Augustus Fox-Pitt-Rivers did it again. He seems to have lead a jolly life--as Wikipedia says in 1954 he was brought before the British courts charged with "conspiracy to incite certain male persons to commit serious offences with male persons." This was the famous Montagu of Beaulieu affair. He was also married to Orwell's widow the beautiful Sonia Brownell.

The first of Irene Iddesleigh is more common than one would suppose. To confirm this, I just checked BookFinder, where under numerous listings, there are five separate copies. The reason,I suspect, is that Amanda Ros supplied copies from unsold stock to admirers through the 1930s' (she died in '39). All copies seem to have the errata slip altered in Ros's hand. I have a copy that I bought from the Marylebone High St Francis Edwards for 10/-.