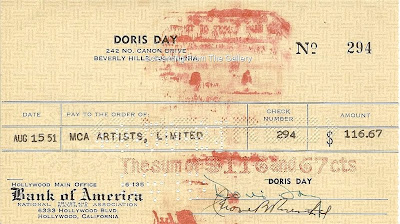 Autograph collecting as a hobby is said to have become established in Europe in the 1780s - by the late 1890s it had become sufficiently annoying to writers to be satirised by Henry James in his short story The Death of the Lion (1894). I am indebted to David Haven Blake's magisterial work Walt Whitman and the Culture of American Celebrity for these tit bits. Blake advances the idea that early collectors saw the autograph 'as a revealing symbol of the inner life of the renowned.' This may still be true, that something private, possibly intangible, is revealed in an autograph. He quotes one Tamara Thornton as saying that the autograph represented ''a reification of self in script''. The signature signifies the man. A few anecdotes before advancing further into woo woo territory.

One of the commonest autograph stories concerns the celebrity cheque that doesn't get cashed because the signature is worth more than the amount of money on the cheque. This would not really work for Lembit Opik and the Cheeky Girls or even Gareth Gates (but it might for Bill Gates.) George Bernard Shaw boasted about how his cheques were seldom cashed, also there are tales of uncashed Marc Chagall and Michael Jackson cheques. The quirky site Anecdotage.com has this fairly typical celeb story:

While driving with Lee Marvin one day, Gary Cooper stopped for gas and paid with a $10 check. The attendant was delighted. "I'm going to frame this!" he exclaimed. Some time later Marvin asked Cooper how many of his checks came back to the bank. His reply? "About one in ten."

The trouble with these stories is that you should be able to get your cashed checks back, albeit stamped, as with all the cheques above (Doris Day, Mae West, Buzz Aldrin.) An Argentinian friend who met Jorge Luis Borges on a plane got him to sign her passport but was mortified when on renewal it was kept by the authorities... There is an amusing sub genre of related Picasso autograph stories:

Picasso once visited a local cabinet-maker to commission a mahogany wardrobe for his chateau in the South of France. To illustrate the design, he quickly drew a sketch showing its shape and dimensions, handing it to the craftsman. "How much will it cost?" Picasso asked. "Nothing," the cabinet-maker replied. "Just sign the sketch."

Similar stories are told of Dali and even Damien Hirst and Tracey Emin but I like this story of Chaplin and Picasso -a good story and as they say in Italy - si non e vero, e bon trovato:

Chaplin was visiting the studio of his friend Pablo Picasso. Picasso made a sudden gesture and accidentally spilt some paint on Chaplin's white slacks. He said, 'I'm so sorry, Charles! I'll get some spirit and remove it.' And Chaplin said, 'Please don't! Just leave the paint where it is and sign my trousers.'"

Um, you get YOUR checks back, not the ones from others that you cash. I don't think Doris Day would be too excited to have a Doris Day autograph.

Thanks for pointing that out Fnarf. Glad someone is paying attention. I guess therefore all 3 cheques came from the signers (or possibly a rogue banker-plenty of them). Maybe there is a kind of dealer who pursues estates just for the cancelled cheques. What I need is a Rimbaud cheque, or Keats will do. N

The overnight lending market is designed to do exactly this. Bank B, order cheques