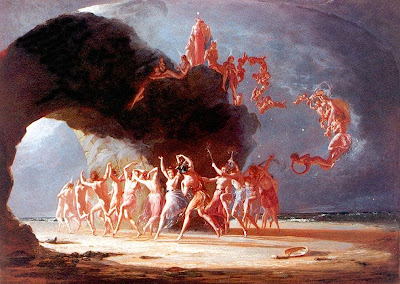 In 1841 Dadd was still a student at the Royal Academy when S. C. Hall invited him to illustrate the text for ‘Robin Goodfellow ‘ for his forthcoming Book of Ballads. Two years after its publication Dadd was incarcerated in Bedlam for the frenzied murder of his father in 1843. The 1841 oil painting by Dadd of Puck sitting on a toadstool was later reproduced as a steel engraving by Lizars and as such became instantly popular when it was published in various editions of Shakespeare. Such is the trendiness of Dadd today that a plate removed from one such edition was estimated at a ridiculous £80 - £120 in the 2009 sale of the remaining stock of art dealer Peter Nahum. Much cheaper ‘ Pucks ‘ can be found if you search hard enough.

In late November 1849 John White Webster, a professor of chemistry at Harvard University , murdered the wealthy University benefactor Dr George Parkman in his laboratory. It seemed that the poorly paid Webster, had serious money problems and owed Parkman over $400. Parkman, anxious for the money, had made an evening appointment with the professor to discuss the debt. When Parkman arrived Webster was ready for him with a large club. After bludgeoning him to death, Webster dissected the body and hid the remains. Days later he was seen trying to dispose of these body parts in a furnace. The police were alerted, the lab was searched and among other remains, Parkman’s false teeth were recovered. As with the similar case below, Webster’s conviction depended on the uniqueness of a piece of evidence, in this case, a pair of choppers which had been custom-made to accommodate Parkman’s odd-shaped jaw. Professor Webster pleaded guilty to murder and was hanged in 1850.
Webster had a degree in medicine and his first book, an account of San Miguel Island in the Azores, was researched while he practised there in 1817- 18. This remains an elusive item. His second work, an otherwise unremarkable chemistry textbook, published when Webster was 33, has, due to its author’s notoriety, become a collector’s item, and at present there is only a single copy on ABE.

In 1924 wealthy Chicago super-brains and disciples of Nietzsche, Nathan Leopold and Richard Loeb, thought they had committed the perfect crime when they murdered the naïve schoolboy Bobby Franks just for the thrill of it. But the discovery of Leopold’s spectacles, which had a peculiar hinge, at the scene of the crime quickly led to their arrest and when questioned separately their stories soon fell apart. At the trial the murderers pleaded guilty and their brilliant defence attorney, Clarence Darrow, managed to persuade the judge not to sentence them to capital punishment ( they were legal minors anyway ).Instead they were jailed for life plus 99 years 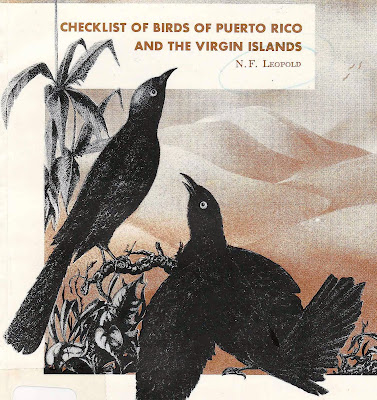 . Loeb was himself murdered by an inmate in 1936, but Leopold proved a model prisoner, even volunteering to be infected with malaria as part of a study. He was released on parole in 1958 and in the same year his autobiography, Life Plus 99 Years, appeared. He emigrated to Puerto Rico not long afterwards, where he became a clinical worker, married, and obtained a master’s degree in social medicine. For many years he made an intense study of local bird-life and in 1963 his Checklist of Birds of Puerto Rico and The Virgin Islands was published. He died aged 66 in 1971.

Leopold’s autobiography is a good read, and there are several reasonably priced copies on ABE. Much rarer is his ornithological monograph—a slim booklet that appeared under the name ‘ N. F. Leopold ‘. It’s something to look out for among those dullish scientific pamphlets one finds on the Natural History shelves of second hand bookshops. Incidentally, what is it with murderers and birds (see below ) ?

‘Birdman of Alcatraz’ Robert Stroud ( in real life much nastier, apparently, than his portrayal on film would suggest )had plenty of time to study the canaries he bred in his cell at Leavenworth Prison, Kansas, while doing life for the murder of a guard there in 1916. In time he became a major authority on bird diseases and in 1933 published Diseases of Canaries. Ten years later, after he had just been transferred to Alcatraz, a much more substantial work, Stroud’s Digest on the Diseases of Birds appeared and his fame grew. He died a celebrity at the age of 73, having spent 54 years in prison.

Stroud’s Digest is now seen as a significant scientific treatise and since its appearance has gone through many editions, most of which sell for a few dollars. The first, however, remains a rarity.

If crossed, notorious hoodlum Reg Kray might have nailed your head to the floor like that gangster out of Monty Python, but like any good cockney boy he was devoted to his mother, as his alleged poems testify. No doubt Thoughts has become sought after among true crime followers and those gangsters who like to boast that they knew the Krays personally.

Thanks Robin for deep and fruitful research. Pic at the top is a Richard Dadd 'Come unto These Yellow Sands'. (1842). Upmarket dealers Peter Harrington have a splendid copy of the Kray book (with a signed letter) at a not unthinkable £375 inscribed thus "Dear - Lisa, God Bless, Friend, Reg Kray." The letter reads "You can get my latest book... if you phone Richard Driscoll at this number... I have yet to write a keep fit book." To my knowledge no Kray keep fit book has yet appeared, but it should---I'm thinking of the Elvis line from 'Jailhouse Rock' - '...if you can't find a partner / Use a wooden chair.'
Posted by Bookride at 1/03/2011

Let's not forget Caryl Chessman's "The Face of Justice" and "Cell 2455".
And Ian Brady's "The Gates of Janus" with a foreword by the sage of Cornwall himself, Colin Wilson. This latter book was requested by a customer and I was just a little uneasy in acquiring a copy for him - but I did.