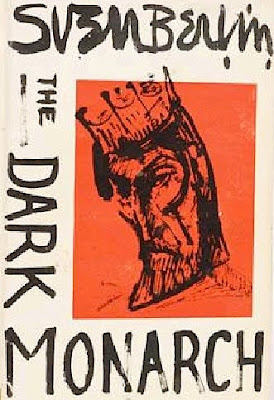 Sven Berlin. The Dark Monarch: a Portrait from Within. The Galley Press, London 1962.

‘ I have sealed between two boards the names of folk I knew in Cornwall to be opened on my 100th birthday, September 14th 2011 ‘.

The words of Sven Berlin in 1998 regarding a legendary rarity and one of the most scandalous art books of the twentieth century. The Dark Monarch appeared a few years after Berlin (1911 – 1999) had left St Ives, where he had lived in an artistic community that included Barbara Hepworth, Bernard Leach, Ben Nicholson, Bryan Winter, Alfred Wallis, Roger Hilton, Terry Frost and Arthur Caddick. It was a satire on the behaviour of some of these characters and was written perhaps in revenge for the way in which he as a figurative painter and sculptor had been snubbed by some of the adherents of abstraction. Berlin’s error was to assume that his enemies would not recognise themselves in the ‘fictional' characters of the supposed novel. Perhaps he also felt that they wouldn’t have the money or energy to file lawsuits. But he was wrong. Berlin had portrayed the artists almost unaltered. They recognised themselves and Arthur Caddick, a close friend, was the first of four who filed for libel. The suit was settled out of court and Berlin lost £7,500 in damages. Not only that, but the court requested the return of any books sent to bookshops. Even those copies that had been sold were requested to be returned to the publisher. Luckily, the British book buyer doesn’t take too kindly to being told by a court that the ‘libellous ‘book they’ve bought must be destroyed. So, of the 575 copies of the Dark Monarch that had been sold or reserved , ‘no more than 100 copies escaped ‘ (according to one dealer ), and it is likely that most of these ended up in the bookshelves of many free-thinking north Cornish art lovers.

Berlin, nevertheless, was financially ruined by the action and was affected by his experience for the rest of his life. He became paranoid and only revisited St Ives once in 40 years. After a peripatetic existence he ended up in rural Dorset, where he died in 1999. But on the issue of The Dark Monarch he remained unrepentant up to the end. He insisted that his novel was a work of the imagination, rather than a factual document. He insisted that he had created real characters that belonged ’ to the world of imagination: who triggered them does not matter ‘.

Following the order for the scandalous novel to be withdrawn it became an instant collector’s item, especially in and around St Ives. Copies were paraded around; some changed hands for many times the cover price. Berlin himself, it would seem, died owning just a single copy, presumably because he gave away some of his complimentary copies to friends and relatives before the edition had been recalled. With the coming of the Tate to St Ives the market for copies was further boosted and Berlin, even taking into account his love of hyperbole, was probably not far wrong when he exclaimed to his publisher in 1992 : ‘My prices are rocketing up. The Dark Monarch is going for £500, if you can get it ‘. 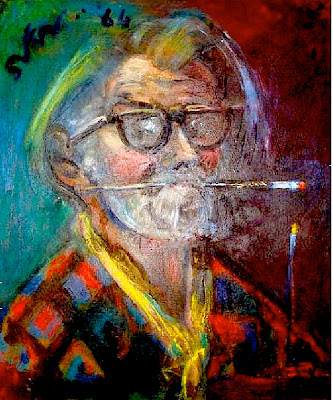 Berlin won’t be around to celebrate his hundredth birthday on September 14, but friends and relations, and perhaps a few enemies, will surely enjoy the ritual opening of the sealed ‘ key ‘ to The Dark Monarch , which coincides with the publication of a new book on Berlin, Artist and Publisher. Both events are likely to ruffle a few feathers in Cornwall and there may be one or two raised voices in Tate Britain and Kettles’s Yard too, although the controversy is nearly fifty years old.

Even though the much-coveted Dark Monarch has recently been reprinted in a small edition, copies of the first are still very much sought after. There are three currently on ABE. Two are with a well known art gallery in St Ives, who want $763 for each (one is signed ); the third is elsewhere at a more sensible £250. Berlin’s other books are far less expensive. The autobiographical titles hover at around £8, while the more notable Alfred Wallis of 1949 comes in at a surprising range of prices, from an extremely reasonable $19 in the US to $80 in London and a frankly silly $254 from St Ives.
Meanwhile, why not browse a few junk shops in Cornwall for one of those elusive Dark Monarchs. Finding one could pay for the trip! [R. M. Healey]

Many thanks Robin. I am off to the Cornish Riviera as we speak...will also look out for his Alfred Wallis book.
Posted by Bookride at 9/14/2011

The Dark Monarch key 'envelope' was indeed ceremoniously opened at a must-see retrospective currently running at the St. Barbe Museum & Art Gallery in Lymington. The stunning exhibition of his work charts his life from the early 1930s as an adagio dancer. through his St.Ives work, war drawings and on into the New Forest, the Isle of Wight and later in Dorset, where by the way he continued writing, painting, drawing and producing remarkable sculpture. Yes, Dark Monarch always haunted him but it never prevented him working. There's also a fascinating new book written by a friend, John Paddy Browne which reproduces Sven's letters over 30 years and during his time in the Forest. A great insight. There's so much more to know!