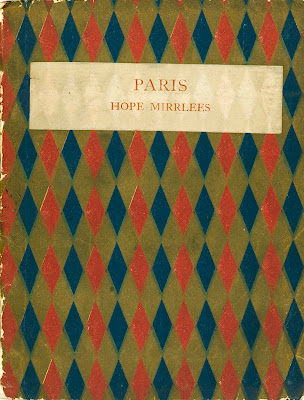 The rediscovery of the Scottish writer Hope Mirrlees (1887 – 1978) is, I feel, principally due to the merits of her one masterpiece, the long poem Paris, which the Woolfs published in 1920. Only 175 copies of the 600 line poem were produced, which means that it now belongs with Pound’s early privately printed work as a true rara avis of modernism. At present, one dealer has a superb copy for $8,000. Predictably, critics today use the modish term ‘psychogeographical ‘ to describe the poem, which is a daring, impressionistic tour in French and English through the French capital and has been described as the ‘ missing link between French avant-garde poetry and The Waste Land.' The stylistic parallels are obvious, and the influences of Pound and other Imagists, are noticeable too:-

…Gambetta
A red stud in the button-hole of his frock-coat
The obscene conjugal tutoiment
Mais, c’est logique
The Esprit de Francais is leaning over him
Whispering… 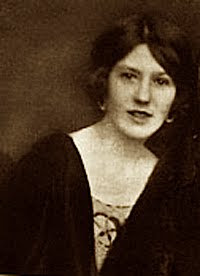 And so on. Paris is undoubtably a brilliant debut and deserved the care and attention that the Woolfs devoted to it. The paper for the covers, for instance, is the same paper used as endpapers on the first edition of Jacob’s Room. Virginia Woolf hand-set the proofs herself and hand-corrected the final copies. From her diaries it would seem that the novelist/publisher regarded her brilliant, multi-lingual, young protégé, whose family fortune derived from diesel and sugar, with a mixture of admiration and disdain. She was:

‘ a very self-conscious, willful, prickly and perverse young woman, rather conspicuously well-dressed and pretty, with a view of her own about books and style, an aristocratic and conservative tendency in opinion & a corresponding taste for the beautiful & elaborate in literature ‘ .

Oddly, Eliot himself has little or anything to say of Paris, at least in his published letters of the period, although he came to know Mirrlees well in later years and indeed wrote portions of The Four Quartets at her home at Shamley Green, Surrey. The early twenties was a productive period for Mirrlees. Paris was followed by a novel, The Counterplot (1925), then came The Book of the Bear (1926), a series of translations of tales from the Russian which she produced with Jane 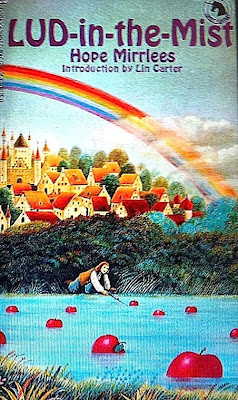 Harrison, with whom she shared her life for many years. In the same year appeared the book which has gained her a cult following. Lud in the Mist has been described by Neil Gaiman as ‘one of the greatest fantasy novels ever written ‘ and also a ‘reconciliation of the fantastic and the mundane’. Others have compared it to Susanna Clarke’s Jonathan Strange and Mr Norrell, and more pointedly to the work of Tolkien, who may well have been influenced by it - there are definite similarities in style and characterisation. There are themes—notably relating to how imagination is related to reality-- that resound more strongly in today’s climate than they did in Mirrlees’s own era. Its reprinting ( without the author’s consent) in 1970 introduced it to the Flower-Power generation and its popularity has slowly increased ever since. At present, copies of the novel in paperback are easy to find online at sensible prices, though no copy of the first 1926 English edition is presently on ABE. There are, however a few copies of the first American edition ranging in price from $500 to $1,200.

After Harrison’s death in 1928 Mirrlees’s productivity suddenly slumped to almost nothing. Protected by her family’s wealth, she was able to pursue her literary and other interests as a virtual recluse, without fear of penury, though in the fifty years left to her she published only one other book, A Fly in Amber ( 1962), which is a biography of the remarkable Elizabethan antiquarian and book collector Sir Robert Cotton. Copies of this are easily and cheaply available on ABE. Mirrlees died in 1978.

For those interested in twentieth century women’s writing, it may be instructive to compare and contrast the life and work of the privileged Mirrlees with that of the impoverished Charlotte Mew, though their work was markedly different in style and scope. Both were publishing in the same era, were equally determined and strong in their different ways, and both women braved convention in their sexual orientation. Following the publication of the penurious and tragic Mew’s Collected Poems, we are very soon to have from Carcanet the Collected Poems of the only slightly more prolific Mirrlees. Paris does, of course, feature largely in this collection, but for those who would prefer to read the poem in facsimile, the Pegana Press have recently published an edition of 50 numbered copies at £375. [R. M. Healey] 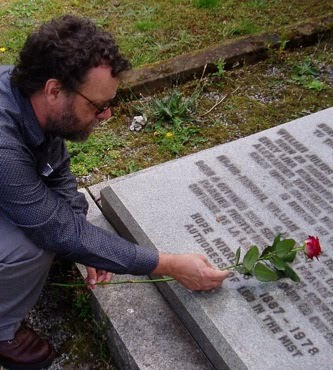 Many thanks Robin. The price of $8000 may be toppish but It is certainly a 4 figure book. I sold one a decade back in the hundreds -probably a routine copy, it went to a Hogarth Press completist and it is likely to be the Hogarth connection that drives up the price. It is one of the handful of 'stoppers' when it comes to building a Hogarth collection although it is not nearly as rare as 'Poems by C.N. Sidney Woolf' (1918) which on this reckoning must hit $10000! Woolmer notes that most copies of 'Paris' have 2 short hand-written corrections by Virginia Woolf (pages 3 and 22.)

A good book came out in 2009 about Hope by Michael Swanwick 'Hope in the Mist' -- it has sold out (that's the author above placing a rose on her grave.) I got my copy through selling the author's agent a Mirrlees letter (to Raymond Mortimer) at a slightly reduced price. Sadly it is not the one of 30 signed by the author and Neil Gaiman and the fantasy artist Charles Vess. There were also 5 copies lettered A - E for presentation-- hand bound in iridescent ripe plum silk with chartreuse cloth covered slipcase. You could not miss one of those. By the way 'Paris' is a small book less than 6 inches high - look out for the red blue and gold diamond design...
Posted by Bookride at 9/23/2011

As a member (just) of the seedy end of the Flower Power Generation, I'm familiar with Lud, but have never heard of Paris. It looks every bit as inscrutable as The Waste Land.

A couple of spelling corrections, if you would: "Tolkien", of course, not "Tolkein"; and It was Susanna Clarke, not "Susan", who wrote about Messrs Strange & Norrell.

Thanks Colin -- corrections duly made. Glad someone is paying attention! N

Good to see a mention of Hope here. And for those who do not wish to spend quite so much for a copy of 'Paris'---

The Collected Poems is out now.

A copy went today at Dominic Winter's for £2700