In a box of pamphlets and booklets at the California Book Fair recently I found a catalogue by the legendary Anthony D'Offay. It appears to date from 1961 and was sent from an address in Jamaica Street, Edinburgh. D'Offay, 21 at the time, was one of the great post war booksellers and probably the richest although most of his money was made in modern art. Books probably provided the seed capital for a business fortune large enough to enable him to generously donate £125 million worth of art to the nation in 2008. His first great coup was to locate and buy much of the book and manuscript collections of the John Gray and his lifelong companion Andre Raffalovich.

Both poets were Roman Catholic converts, both gay and very much creatures of the 1890s--the great English decadence. Also their work is seriously collected and quite valuable - a completist collection of their published books in decent condition would leave little 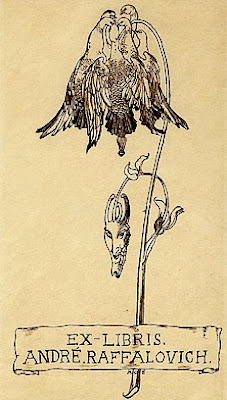 change from $60,000, with Raffalovich using up most of one's funds. In D'Offay's catalogue he has 3 works by Raffalovich. Roses of Shadow a short play which AOD suggests lampoons Wilde with lines such as 'Even my red carnation is getting faded... I wish red flowers never died. I love red I always wear red: the red flower of a passionate life.' It was privately published in 1895 in a very small edition. D'Offay needed 5 guineas for a fine copy, a copy has been sitting on ABE for some while at a fairly challenging £4000 - not as nice as the 1961 copy but a presentation copy from Raffalovich to film star Ernest Thesiger. It is by no means Raffalovich's most valuable book.

Raffalovich, who was quite wealthy, had 2 bookplates one by Eric Gill (top) and one by Austin Osman Spare (one of his best) they always enhance the value of any books they are found in... [to be continued]
Posted by Bookride at 2/15/2012

Thanks Tim -- as you say an excellent find, although I would prefer to have found something by Marc Andre R himself -- like his novel 'It is Thyself' a slightly staggeringly rare and valuable book...more soon. N

Sorry the novel is called 'Self Seekers'...possibly there is another, then there is the unrelated George Raffalovich author of 'Planetary Journeys'...more your line! N