Three of the rarest twentieth century books on magic... 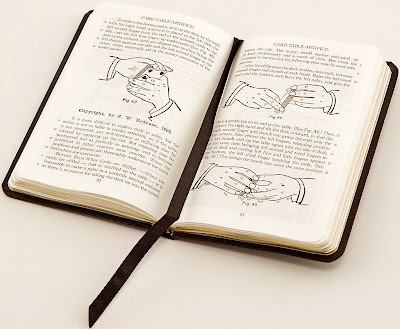 Guy Jarrett was the magician’s magician. An astonishingly accomplished technical magician and inventor, he was extremely scathing about the deficiencies of his fellow illusionists and apparently difficult to work with. In 1936 he decided to disclose the secrets of his inventions in a book that he would print and bind himself. Using foundry type and a simple printing machine he went about his task, which involved actually writing the book as he set the type for each page, which he printed one at a time. This was not unlike the John Bull method of printing, though with metal rather than with rubber type. As each page was printed Jarrett would remove the type and reassemble it for the next page. The book contained 106 pages and, according to the author, 582,489 characters. It took Jarrett a year to complete this awesome project ( he claimed to have printed 400 copies ) after which he allowed himself a little self-congratulation on the last page:

‘This is a hell of a good book. I just read it. I invented the tricks, built the tricks, made the drawings, set the type, printed the book, and will bind the book. All over and out ‘

Jarrett was as good as his word. He did indeed bind his book in blue cloth—very badly, according to one critic—and on the cover of it in silver lettering he stamped the single word ‘ JARRETT ‘. He priced the book at an amazingly cheap $5, but it didn’t sell. He then advertised that he would increase the price by one dollar a month until it reached $10, at which point he would throw away all the unsold copies. Luckily, he didn’t carry out this threat, but no-one really knows how many copies of Jarrett Magic and Stagecraft have survived. Because of the lack of interest from magicians it is likely that the author bound only around 70 or 80 copies from the sheets. There is evidence that he gave away copies to magicians he liked. As a result, and perhaps because of its poor binding, the book is now exceedingly rare and much sought after by the wealthier professional magicians. Historian Jim Steinmeyer, who in 1981 reprinted it with his own comments as The Complete Jarrett, calls it one of the most important books on illusion ever published.

This was a magazine of truly Lilliputian proportions, each volume being around half the size of a pocket diary, and like Auden’s famous Poems o 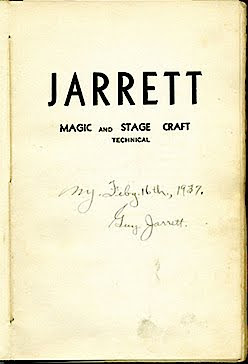 f 1928, hand printed on an Ardana press. Essentially a miscellany of articles on the history of magic, it was published by subscription by magician Wilf Huggins in an edition of 50 for each of its 38 issues. Probably only 30 complete sets have survived, some of which are in academic libraries. The Library of the Magic Circle, for instance, holds one set in limp leather. In 2000 a fan tried to track down the current owners of complete sets and discovered that at least 17 sets were unaccounted for. Individual issues may still in circulation, though the tiny dimensions of each copy would militate against many surviving. Like Jarrett, The Midget Magician is a legendary rarity among collectors, and is probably on more ‘ wants lists ‘ than any other magic books.

The first book to describe in great detail all the gambling moves in cards, and as such is greatly sought after by card magicians throughout the world. Mystery, however surrounds the identity of the author. Obviously, S. W. Erdnase is an anagram and a number of writers have proposed theories. The most substantial book ( 420 pages ) on the subject is The Man who was Erdnase by Bart Waley with Martin Gardner and Jeff Busby, who argue that the mystery figure was an American con man, gambler and murderer called Milton Franklin Andrews . All later issues bear the date 1902, but only the first edition was bound in green cloth. [R. M. Healey]

Many thanks. Too busy to post anything myself and even found it hard to find suitable, clear images-- the top photo is of a late reprint of Erdnasse's fabulous work here got up like a bible and said to be almost as useful as the great book. The other photo ( Jarrett) seems to be from a catalogue of a forthcoming sale where no doubt the book will make the right price...Rock on Robin, will get back to scribbling when these book fairs are behind me...
Posted by Bookride at 2/08/2012

Thanks so much for this. I like a bookseller who talks about prices! Magic.