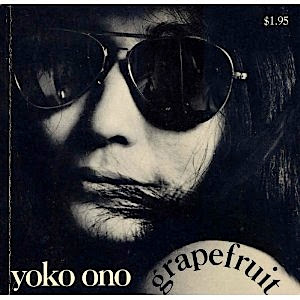 Well-heeled collectors of early Beatles memorabilia ( signed programmes, posters, concert tickets, song lyrics written on napkins etc etc ) may not thank you for offering them a first of Yoko Ono’s Grapefruit, signed or otherwise, at a hefty price. Many fans still blame Ono for contributing to the splitting of the Fab Four and for taking John in a direction that would ultimately lead to his violent death.

Such narrow-mindedness seems absurd when we think of what Lennon achieved while with Ono. As for the woman herself, one art historian has called her ‘ one of the most daring , innovative and eccentric artist-performers of her time’.

Oko was a leading figure with the Fluxus art movement, which originated in New York City in the early sixties and eventually spread to Japan. 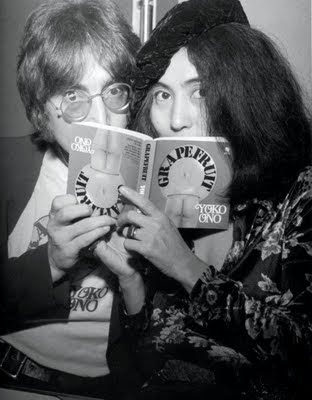 Fluxus, according to one critic, ‘ encompasses a reductive gesturality, part Dada, part Bauhaus and part Zen, and presumes that all media and all artistic disciplines are fair game for combination and fusion ‘. John Cage was an early member of the movement and ‘do-it-yourself ’ music was often performed. As well as a performer, Ono sees herself as a musician and the instructions she and others issued for enacting the art work they called an ‘ event’ was called an ‘event score’. In Grapefruit she collects some of ‘ pieces’ ( such as ‘Clock Piece’ and ‘Laundry Piece ‘) that she enacted in galleries and concert halls, mainly in the USA. Here are some of the pieces/scores included in Grapefruit:


Imagine the clouds dripping.
Dig a hole in your garden to
Put them in.

Let people copy or photograph your paintings.
Destroy the originals.


One can see the influence of Japanese graphic art, the art of haiku and Zen in such ‘instructions ‘.

As you might expect, Grapefruit is as minimal in appearance as a piece of Raku pottery. In fact, from the outside it looks like nothing more than an artist’s sketchbook, square in shape and covered with a dull light brown or cream wrapper. Some way down on the left of the front cover Ono ( a fan of calligraphy ) has inscribed in black ink the single word Grapefruit. Inside, the instructions are printed in black ink using a number of subtly different typefaces.
There are conflicting accounts regarding the first meeting of John and Yoko, but it is generally accepted that the year was 1966, that soon afterwards Yoko sent John a signed copy of Grapefruit, and that the Beatle was intrigued by both book and artist. The rest is history.

The pre-publication price of Grapefruit was a mere $3; post publication it doubled. It is not known exactly how many of the edition of 500 were sold. I can’t imagine that Ono kept a list of buyers. It has been said that no copy has appeared at auction for thirty-five years and that this is because most remain with Japanese art collectors, who are hanging on to their copies. However, a well known London dealer has a nice copy for sale at £12,000, and there must be other Grapefruits circulating in the UK, perhaps bought in the era of Flower Power and forgotten about. One of these was acquired by a friend of mine, who now wishes to sell it (see me for details) at a price far below the £12,000 cited. A much expanded trade edition was published by Schuster and Peter Owen in 1970 and a year later Sphere brought out their own edition. These later copies range in price from $20 – $40, though one dealer wants a very un-Zen like £2,250 for one signed by both Yoko and John. [R.M. Healey} 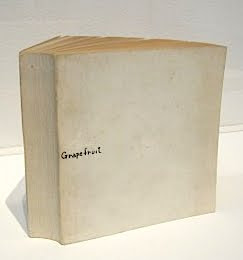 Many thanks Robin. Hope that one finds a buyer-- it certainly should. I remember Yoko as an avant-garde artist before John loomed so large...She used to get people to cut bits off her clothes with scissors at the Round House. Fluxus surely. I always heard that they met at the Indica Gallery in Southampton Row, probably the most interesting thing to happen in that street since Maclaren-Ross moved out of the Bonnington. Meanwhile £2250 for a copy of the UK ed signed by Yoko and John may not be unbuyable - especially less 20 % and with 3 post dated cheques stretching into 2013. A better investment than Groupon shares.

Btw the plain white copy above is the true 1964 first, the title being always handwritten on the cover by Yoko. The b/w one is the USA first, John and Yoko are holding the UK first. Gorrit?
Posted by Bookride at 2/20/2012

Garth of the Grimpen Mire said...

Sir John Barbirolli, the conductor and cellist, was born in Southampton Row on 2 December 1899. A commemorative blue plaque was placed on the wall of the Bloomsbury Park Hotel in May 1993 to mark his birthplace. Got a feeling that Ricky Gervaise eats in the Indian restaurant just by the Bonnington too.

Thank you Bookride for v useful bibliographical info. Are you sure the title on the first ed was handwritten by Yoko and if so what is the source for this? OK, I have now examined a copy carefully with a glass and I guess it is hand inscribed - actually I have always mildly wondered how they printed it and the answer must be of course that it was hand written. But it would be nice to have external evidence.

Not sure how we knew I think it first emerged in a Sotheby's catalogue or possibly in the entry for the Sims Reed one. The clue is they are all slightly different. N