‘ With the beginning of October (1900 )I sat down to write The Principles of Mathematics, at which I had already made a number of unsuccessful attempts . Parts III, IV,V and VI  of the book as published  were written that autumn. I wrote also parts I , II and VII at that time, but had to rewrite them later, so that the book was not finished in its final form until May 1902. Every day throughout  October, November and December, I wrote my ten pages, and finished the MS on the last day of the century, in time to write a boastful letter to Helen Thomas about the 200,000 words that I had just completed …’

Russell, arguably the greatest British philosopher of the twentieth century was just 28 when he undertook this astonishing feat. The title page indicates that a second volume which would be a ‘symbolic account of the assimilation of mathematics to logic ‘was to follow, but Russell later discovered that Alfred North Whitehead was preparing a work along similar lines, and so he decided to collaborate with him on a larger work that would be published as  Principia Mathematica in 1910 – 13. Both books are sought after, but the earlier work is perhaps more in demand from purists. Oddly, it was not even Russell’s first book. German Social Democracy, which appeared in 1896, when Russell was 24, now fetches over $2,500. It is astonishing to think that this was penned when Gladstone was still alive and radio communication and powered flight had not yet been perfected. Russell, of course, lived to see the first men on the moon. Maybe because he was such a presence in intellectual circles for so very, very long, that he is so revered, despite his persistent womanising, for which, oddly enough Albert Einstein is excused. Both men, incidentally, have been retrospectively diagnosed with Asperger’s Syndrome, with Russell being labelled as the more extreme case. 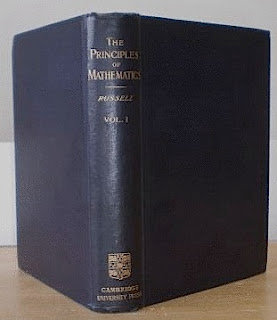 In Principles of Mathematics Russell particularly acknowledged the influence of the logician Peano on his ideas, arguing that mathematics and logic are identical. Indeed, some reviewers felt the book to be of greater interest to philosophers than to mathematicians. It consisted of 59 chapters and was divided into seven parts---indefinables in mathematics, number, quantity and order, infinity and continuity, space, matter and motion. Interestingly, considering that Einstein was working on relativity at the time, Russell anticipates this theory, though he rejected   it. G.H Hardy, who reviewed the book, called Russell’s ‘firm belief in absolute space and time’ old –fashioned. Hardy also felt that although it was 534 pages long, the book was too short. In his view some chapters were too compressed to deal with important issues lucidly.

In 1904 the mathematician Edwin Bidwell Wilson lauded Principles as ‘a monument to patience, perseverance, and thoroughness’. So in demand was it that it went through several editions in Russell’s lifetime and beyond. Today, though it has had its critics, it is still seen as a landmark in philosophy. To Jules Vuillemin writing in 1968 it:

‘inaugurated contemporary philosophy…It is serious and its wealth perseveres…it locates itself again today in the eyes of all those that believe that contemporary science has modified our representation of the universe and through this representation, our relation to ourselves and to others .’

Today, first editions of Principles of Mathematics are in great demand, but hard to come by. Presently, ABE has 8 copies available. Even the cheapest, which is rebound, is selling at £387, while those in the original binding, but without jackets, are going for well over £2,000.The print-run must have been pretty small. Russell was not an established name, and even had he been one, new theories in philosophy and mathematics, by their very nature, are only in demand from University departments in these disciplines. Some idea of the risk any publisher took with such a book in this period may be gathered from the problems described by Russell that beset the follow-up, Principia Mathematica (three volumes, 1910 - 13. Apparently, the Cambridge University Press estimated that there would be a £600 loss on the book. The syndics agreed to bear a loss of £300 and the Royal Society donated £200. The remaining £100 had to be found by Russell and Whitehead.

As the author wryly remarked in his Autobiography, 'We thus earned minus £50 each by ten years’ work. This beats the record of Paradise Lost.' [R.M. Healey]

Many thanks Robin. How many dealers have found this book and thought it was just an odd volume? There are quite a few  books like this ('all published') - right now I can only think of a fairly modest Vita Sackille West and Alfred Marshall's Principles of Economics (1890) usually exchangeable for a $1000 bill. As for blameless womanisers you might add Gandhi and JFK! H.G. Wells was something of a satyr but not quite so illustrious...The copy above is for sale at £2000 during next week's York Book Fair (York Modern Books) - a decent looking example with the ownership inscription of A. D. Lindsay Master of Balliol College, Oxford to the front end paper.

I'd just like to point out that a true diagnosis of Asperger's Syndrome is a thorough and highly rigorous clinical process. I imagine very few of the celebrities whom one sees cited as AS sufferers have been through that process. In any case, a psychological diagnosis of someone no longer alive can only be speculative.

It sounds like a book everyone would have on their bookshelf, even if few ever read it.
Was it ever reproduced in a trade edition?

Tim -- Allen and Unwin kept publishing the book as I recall. We bough their file copies in the 1980s and Bertrand (along with Tolkien) was one of their star authors.


While I agree with Mr Walker that retrospective diagnoses of AS are fraught with difficulties, this shouldn't discourage us from forming certain conclusions based on the evidence of the characteristics that the deceased share with those that have been clinically diagnosed with AS. On this point may I recommend the excellent Asperger's Syndrome and High Achievement by the mathematician Dr Ioan James, which was written with the encouragement of Simon Baron Cohen, who I have interviewed twice.

Ha - I knew Helen Thomas was old, but didn't know she was *that* old!

College seems to be turning to semi-literate chaps these days. Sic transit etc.,