PHOTOGRAPHY
Large book (13 by 10 inches) - likely to be found on the white shelves of Long Island summer mansions and on glass coffee tables in the NY apartments of fashionistas, name droppers, decorators and photobook collectors. Aarons served as a combat photographer in World War II and was awarded a Purple Heart; friend of the famous, lanky and charming, he said "I'm not a master photographer. I'm a journalist with a camera." America's Cecil Beaton, but straight. Surprisingly the book is listed in Vol 2 of Martin Parr's essential 'The Photobook. A History.' Generally the discerning duo eschew coffee table style books and 'Society' snappers. Parr, however, detects a mild satiric note to the photos -'Aarons wields a sharp camera...' By the way, Bailey and Beaton are not to be found in Parr's extensive black books, which is a little harsh on poor Cecil...said to be a rather unpleasant man but with undoubted talent and skill. 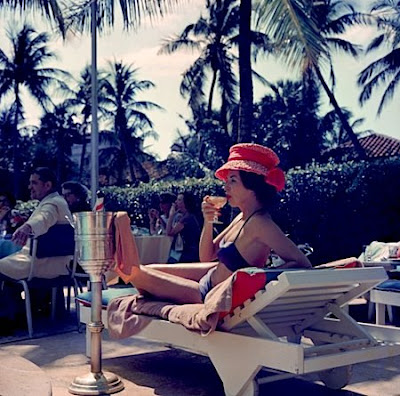 Dust jacket notes read: 'A Wonderful Time captures magnificently the life of America's elite from coast to coast, in Bermuda, the Caribbean, and Acapulco. Drawing from thousands of pictures taken since World War II on assignments for Holiday, Town & Country, Harper's Bazaar, Life, Vogue, Travel & Leisure, and other publications, Slim Aarons has put together the best of them--many never before published--with a narrative of his experiences and impressions while photographing American aristocrats on their estates and at play at their favorite resorts...having a wonderful time.' Other places and hangouts included The Myopia Hunt Club, Sugarbush, Snowmass, Bermuda, Jamaica, Acapulco, La Jolla, Nassau, The Exumas, The Bath and Tennis Club, Aspen, Hobe Sound, Montego Bay, The Waldorf. A vanished world. A litany of leisure, privilege and wealth. Dominick Dunne land. Baby you're a rich man too... VALUE? Possibly a little old game/ vieux jeu in its appeal especially in a time of financial apocalypse. However this may have added to its appeal as its price has recently started to rise with all the cheaper copies that were available a year or more ago having found buyers. This is a book that has sold for over a $1000 but a careful buyer should find one for half that. One seller who has entered the photobook world late and seems to think it's full off mugs to whom money is no object, wants well over a £1000 for a less than fine copy and may have to dream on.
Another Society photographer 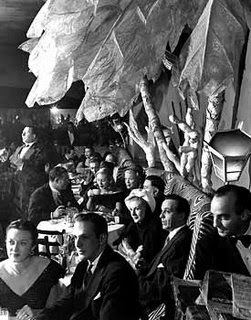 from a slightly earlier era who is also much wanted is Jerome Zerbe, especially his 1937 privately published work 'John Perona's El Morocco Family Album.' Amazon had a decent one at $1250 but it went. An unpleasant sounding copy is being sold on Amazon for $1300, however it's sale would benefit the Mennonite Central Committee. Another wacky seller who notes that it features New York's pre Jet Set sipping swanky cocktails in 'swank Zebra banquettes' has 4 as new copies at $1800 in custom 'Martini Spill Proof' Mylar. Probably a lucky warehouse find but not one where the luck is being passed on...

OUTLOOK? Better than 2 years back when I first covered this book. I suspect it was published in a large run so it is unlikely to become rare but it will always be wanted, especially with the imprimatur of Parr and Badger. In good times it will sell to the leisured and loaded and in down times it has a bitter sweet nostalgic appeal. The popularity of the TV show 'Mad Men' which covers this era may also be helping its appeal. One of the great coffee table books.
Posted by Bookride at 5/12/2009

I bought this fabulous photography book from Powells of Portland for $350 a while back --it arrived quite bumped because of their poor packaging and every time I look it at I thin FYU.