A book I would love to find, one of the earliest emanations of the gothic tradition in literature. A pair of complex neoplatonic poems on night and day--a quarto of 40 pages, it has 2 words in Greek in the title line which transliterate as 'Skia Nyktos'.

I was reminded of it recently when I came across a 1901 auction catalogue of the McKee sale which broke a few price records for rarities of Elizabethan literature. Books of this period were at the time the summum bonum of book collecting and, for a few rich and cultured players, still are. Most of the great books {without even including Shakespeare) require wads of cash not to mention 'realms of gold.' At the MCKee sale in New York 'Shadow of Night' ('very rare') made $230 and Chapman's famous work 'Seven Books of the Iliad of Homer' ('superlatively rare') made $865 and was bought by Pickering and Chatto (still dealing.) To get a fix on prices the great 1600 anthology 'England's Parnassus...Flowers of our Modern Poets' ('fine tall copy' -pictured left) made $230 - it has contributions by Shakespeare, Spenser, Marlowe and Jonson. 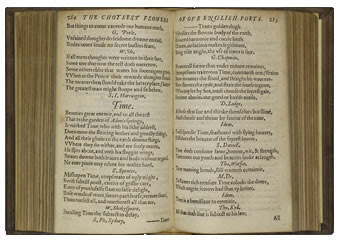 Chapman is, of course, the subject of Keats' sonnet 'On First Looking into Chapman's Homer.' He is said to have written it before breakfast after spending all night reading Homer with a friend and shouting with delight at the felicities of Chapman's translation. Middleton Murry called it "one of the finest sonnets in the English language." You couldn't really get a better review or puff for a book than this:

Much have I travell'd in the realms of gold,
And many goodly states and kingdoms seen;
Round many western islands have I been
Which bards in fealty to Apollo hold.
Oft of one wide expanse had I been told
That deep-browed Homer ruled as his demesne;
Yet did I never breathe its pure serene
Till I heard Chapman speak out loud and bold:
Then felt I like some watcher of the skies
When a new planet swims into his ken;
Or like stout Cortez when with eagle eyes
He star'd at the Pacific — and all his men
Look'd at each other with a wild surmise
—  Silent, upon a peak in Darien.

T.S. Eliot called Chapman 'potentially the greatest artist' of the Elizabethan dramatists. The Oxford Companion refers to him as a genius manqué 'whose learning and energy were never sufficiently disciplined...' to be continued with some speculation on his affiliation with the shadowy secret society of freethinkers known as the 'School of Night'...
Posted by Bookride at 5/16/2009

Fascinating Nigel - I once started reading about the 'School of Night' but decided it was one of those areas best left to those with theories about templars and dark ladies.

His Homer is magnificent - can't remember who said it, but it has been said he remains the only English poet to have understood Homer's world.