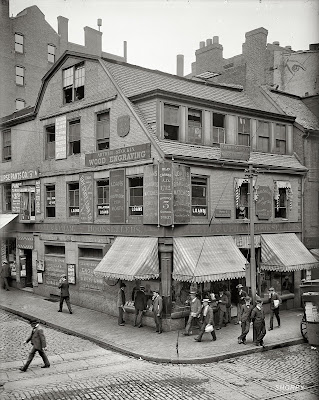 A marvellous shot of a very old bookshop can be found at the Shorpy Old Photo Blog. It shows the "Old Corner Bookstore, the first brick building in Boston." Close inspection reveals a book scout outside talking on his cell phone. In todays fast moving bookselling scene he would be more likely to be consulting the web on an Iphone or sending shots of books to a client via a similar device. To his left are the words 'Toy Books' probably referring to moveable 'pop-up' books like the works of Lothar Meggendorfer --now very valuable and well worth a call to an eager collector. Of course this photo may in fact date from 1900 as the estimable Shorpy claims--in which case see our last entry (Bastards with Bookshops 2 Sept) at the end where we refer to 'those new time machine phones.' 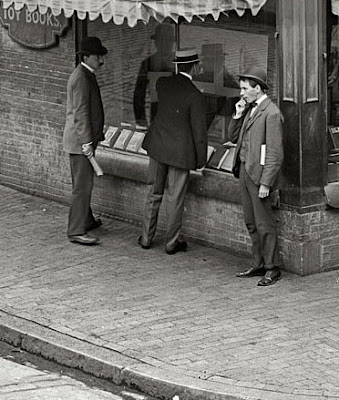 STOP PRESS I have subsequently found that this putative book scout may in fact have been picking his nose; however closer examination reveals a bulky cellphone in his right hand. 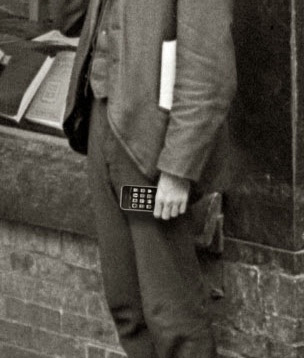 You can download an even higher resolution version of this image from the Library of Congress Web site here:

Of course there is no cellphone in this photograph.

Quite possibly picking his nose...

Apparently it's no longer a bookshop. When I was last in Boston a decade ago it was a travel bookshop, inexorably sliding down the ladder into Ye Olde Gifte Shoppe territory with increasing emphasis on globe-shaped toys and mugs and so forth.