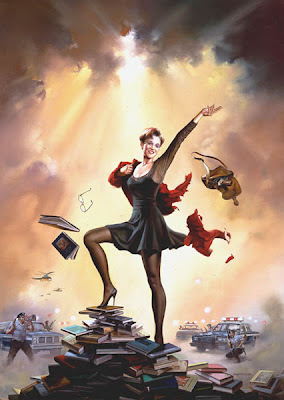 ENTER THE GOPWO
The overpricing of some books on internet malls is commonplace and almost to be expected. The initial reaction to those who complain is 'get over it...' However when overpricing is grossly high and when it is allied to a poor or catchall book description (or none at all) then you can enjoy some righteous indignation.

My father, who flew a bomber in WW2, used to utter a bit of old RAF slang when confronted with annoying bastards--he called them Gopwos - it stood for Grossly Over Promoted Warrant Officer -a sort of self important little man quite common in the services, possibly even a Widmerpool (but that's another story.) I have appropriated this term to describe very high chargers on the net -'Grossly Over Priced Web Operators.'

For example, recently I found a 20 page modern pamphlet called 'Fundamentals of Fiddle Teaching' by one Barbara Chipper (published Essex 1981). Someone has priced the book at £1247.90 ($1,838.28). It doesn't appear to be a mistake as they have many similar books at vertiginous prices. Until I put my copy up it is the only one on the net--this tends to leaves the seller full reign for their imagination and it is surprising that they stopped at a mere £1247. The clincher is the catchall description used by the seller for this and tens of thousands of their books:-

Not falling apart! --at this price one would expect Nigel Kennedy's own pristine copy with two 500 Euro notes laid in and a long letter to him from Yehudi Menuhin loosely inserted! It is hard to imagine a circumstance in which someone might pay this price--possibly if If Barbara Chipper was a preudonym used by Sylvia Plath when she wrote violin teaching manuals or possibly Jean Rhys (aka Barbara Chipper) taught the violin in old age or if Warren Buffet or George Soros or the Google twins had been taught by Ms Chipper and wanted a memento to cherish or maybe 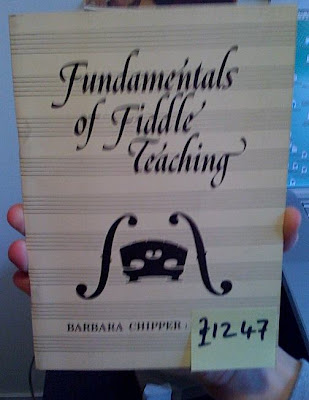 someone needed the book in a multi million dollar lawsuit to prove a point or a major rock star demanded a copy in his dressing room as part of his contract...actually there are many reasons but the odds of the book selling are, say, 10,000 to one. How to price my copy I am not sure, at £100 it still looks barmy and I may be accused of being a 'Gopwo.' Of interest in the book is a piece about the effects of taking Oxprenolol for stage fright--Ms Chipper advises against it.

The image above of the insouciant young woman standing on a bookpile, about to be arrested, comes from the Dutch blog
Occam's Razor. Many thanks. Occam's is possibly a neo-dadaist hangout --putting some Dutch words beneath the image through Babel it translated thus:-

ah, who sweet little girl that within a negligible number of year zo' n harry pot-delicate heart also without wand, however, break can and - for the fratsen of the boeboeks, there we it occur, and such as above the voordeur the gegrift stands ' everyone leest' , and as long as everyone reads that, is we glad, glad and joy-full. our actions do not go unnoticed. we do not work in ijle. not today, and also yesterday not!

I heartily concur with you on these mad charges-- right on! Keep on scribbling.

Oh man, you are like the guru of rare books but haven't you read about the methods of drop-shippers? In most cases they aren't real prices for real books. Those guys are speculating that someone somewhere will enter an order, and then they can source the book from a real source and drop-ship it without ever seeing it. Many of them have software that spiders the net for listings in one place that have a significant difference in another. They are stealthy software operators more than book sellers, juggling figures of money and keeping some of it, basing sales on customer inexperience.

You can usually tell the software generated listings - from the generic description and the prices which usually are an unlikely figure (other than in the obvious sense) and end in .17 or .23 or similar.

Maybe the software will adjust the price downwards when another copy is listed.

Or maybe it's all just madness with no rhyme or reason at all!

a nice surprise to find myself mentioned on your magnificent blog, though :-)

These people really do offer a silver service to their customers and somehow have to cover the cost of employing Matthew, Aletta, Julianne, Mary, Laura, Alex, Thomas and Rachel who will rush within seconds of receiving the order for Fundamentals of Fiddle Playing to gift wrap it and include an appropriate message suitable for all occasions and ages. Just read their terms of business:

About Inkt: Trowbridge, WIL, United Kingdom
We operate SAME DAY DESPATCH, 6 days a week. If we receive your order by 4.30 pm UK time, it will normally be despatched that day. ***However, serious delays often occur on the Abebooks site (affecting order processing) and regrettably we cannot alter this.*** Our staff - Matthew, Aletta, Julianne, Mary, Laura, Alex, Thomas and Rachel - are ready to pick and pack your order within minutes if required. We have over 100,000 books in stock and available for immediate purchase. (Multiple copies of titles do not show up on the site.) We are therefore currently the largest stock-holding and stock-owning online bookseller covering the areas of Wiltshire, Dorset, Hampshire, Berkshire, Devon and Cornwall. The fastest, safest and indeed only way to buy our books is by ordering and paying ONLINE. We only accept online payments at Abebooks, and via Paypal to our normal email address (inkt@btconnect.com): we do not accept any other forms of payment. At any one time, 99.9% of our books are available. We maintain strict stock control, and online updates are sent several times each day. Even with the high number of books we despatch, we can still maintain an order fulfilment rate of nearly 100%. However, although rare, it is possible that the book you order becomes unavailable in the time between your ordering it online and our receiving the order online, which may be several hours. Please bear in mind that we list our books on a variety of websites. If the book you order is not available, we will mark the order as 'Already sold' and your credit card will not be charged. The price of any item is liable to change at any time. Please note that we do not normally reserve books under £20.00 in price (owing to the large number of such enquiries that are not completed by the buyer). Postage and packing are charged according to our online rates, and are not negotiable, either for single or multiple items. Processing, picking, packing, posting and servicing your order in every way involve human labour, time, materials, transportation and general overheads, and all this is included in the online charge. The posting and packing charge is not just for the 'actual cost of the postage'. The appropriate amount is now displayed in the book search results, or by clicking 'Rates & Speeds' near the price of the book. Books on a multiple order are sent in one package. All overseas orders are sent by airmail: we do not use surface post. We ship internationally. All books are securely and protectively packaged, using sturdy packaging and boxes where necessary. We want to hear from you if your book arrives damaged in transit. Orders above £20 are sent by 'Signed For' mail. We can drop-ship internationally as required. Please advise us at the time of ordering. We can also gift-wrap your order with an accompanying gift tag and brief personal message - all free-of-charge. Simply email us when ordering by using the 'Special Instructions' box (in stage 4, 'Checkout: Confirm Order'), stating the message you would like handwritten on the tag, and which gift-wrapping service you require: 'Birthday' (standard 'Happy Birthday' wrapping paper suitable for all ages), 'Christmas' (standard Christmas wrapping paper suitable for all ages) or 'ordinary' (plain coloured wrapping paper). We are happy to provide scans of front covers etc. of books priced at £20 or above. Normally we will refund any item, within 7 days of receipt, if the book is not as described. We regret that we do not process refunds or returns after one month from the order date, if you have not contacted us during that time. We usually offer a dealer discount for books priced at £20 or over. *** WE REGRET THAT WE CANNOT ENTER INTO LONG DISCUSSIONS OR NEGOTIATIONS ABOUT OUR TERMS OF SALE. ***

What a splendid illustration, love it - is it Julie Andrews?

I too wondered about the dramatic differences in web prices for books. There are some eyepopping prices in Amazon for some really ordinary books - thank you pat and Segovia for the explanatory posts.