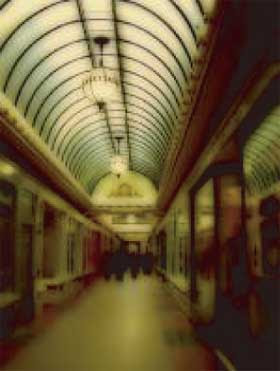 Walter Bendix Schönflies Benjamin (15 July 1892—27 September 1940) German-Jewish Marxist literary critic, essayist, philosopher, aesthetic and cultural critic, flaneur, luftmensch, dabbler in Qabbalistic mysteries, eater of hashish, modernist, Ur post modernist, Francophile, psycho-geographer, translator of Proust and Baudelaire, victim of the Nazis and general European brainbox, egghead, polymath, hero, lover and genius. He is enjoying a fruitful afterlife on the net and in bookshops. His 'Arcades Project' book is a very large unfinished collection of writings on the city life of Paris in the 19th century, concerned with the iron-and-glass covered "arcades" (known in French as Passages). It has much on Baudelaire, Balzac,Poe, Saint-Simon, Hugo, Fourier, Marx and Engels, Gautier - also commerce, fashion, photograpy, the flaneur, prostitution and Haussmannization. A great work of scholarship and speculation - for dipping into rather than reading for hours on end, in my experience. He left this manuscript with Georges Bataille at the Bibliotheque Nationale when he fled Paris in 1940. He died in slightly mysterious circumstances, possibly suicide, on the Spanish border later that year. It is thought that he felt (with some justification) that the perfidious Spanish douaniers were about to hand him over to the Gestapo.

One passage interested me as I was looking at my paperback copy this morning -a piece about the general dealer Fremin:


'' " We have no speciality" - this what the well known dealer in secondhand good, Frémin, "the man with the head of gray," had written on the signboard advertising his wares in the Place des Abbesses. Here, in antique bric-a-brac, reemerges the the old physiognomy of trade that, in the first decades of the previous century, began to be supplanted by the rule of the specialité. The "superior scrap- yard" was called Au Philosophe by its proprietor. What a demonstration and demolition of stoicism! On his placard were the words: "Maidens do not dally under the leaves!" And: "Purchase nothing by moonlight!"'

That is all we get about this oddball trader Fremin, apart from Google Books citing this passage the web knows him not. Possibly there is more info on him buried in the Bibliotheque Nationale, where Benjamin researched the work. The lives of dealers generally go unrecorded apart from listings in directories and occasional mentions in newspaper, diaries and memoirs. Benjamin's father was a dealer in antiques in Berlin (at one time rich) and may have talked of Fremin. Pic of Palace des Abbesses below--now a very trendy area of Paris. As a generalist (albeit within the speciality of books) I salute him across the years. I used to see a notorious general dealer, possibly Irish, around at Phillips 2 when it was at Bayswater (occasionally accompanying Bob Geldof, then an antique dealer and known in the trade as 'dirty Bob' on account of his unkempt look). It was said that he would deal in absolutely anything and once bought 5000 tins of catfood as well as 500 cat books in the flat of a deceased catlady.

Collecting Benjamin? 'The Arcades Project' as a fine US first in hardback from 1999 can be had for $50 or less. Benjamin' s 1928 doctoral thesis 'Ursprung des deutschen Trauerspiels' (Origin of German Tragedy) published by Rowohlt can go for $1000 and a lot more in d/w. One dealer has his second publication from 1923 'Charles Baudelaire/Tableaux Parisiens', a rare 12 page book, said to be beautifully produced, at a gamey $6000, although it is 'as new.' A very nice find. He will, I hope, continue to be collected, read and savoured until Armageddon and beyond. 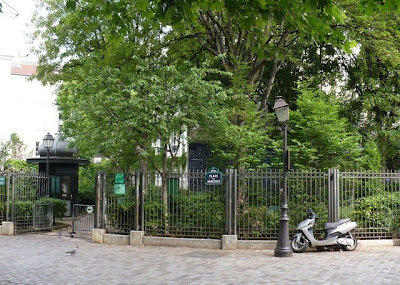 The Baudelaire book you mention is a beautifully printed book, not a pamphlet.

Point taken I guess I assumed it was a pamphlet because it only had 12 pages--will change info, thanks.