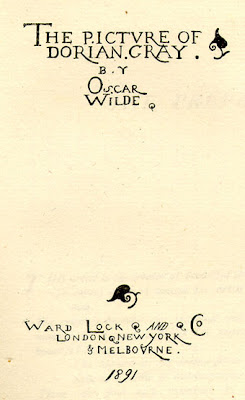 CLASSIC LITERATURE /DECADENCE/ FANTASY
Wilde's only novel, considered by some to be his greatest work. One of the very few examples of decadent English literature, also a fantasy (listed in Bleiler as MX7- i.e. 'Magical Objects / Allegory, Symbolism). Oscar Wilde, chiding a hostile and prurient newspaper critic wrote- "Leave my book, I beg you, to the immortality that it deserves" and insisted in his preface "...there is no such thing as a moral or an immoral book. Books are well written, or badly written. That's all." Dorian Gray first appeared in Lippincott's simultaneously in Philadelphia and London, on June 20, 1890. This publication was immediately followed by publication of an unauthorized, pirated version of the tale, printed June 22, 1890 in New York by M. J. Ivers & Co. Wilde then substantially revised the work and added six new chapters and this the Ward, Lock 1891 edition is the normal first edition that you see (there is also the one of 250 Large Paper copies signed by the great man.) There is a simple issue point on the trade first edition,the first issue has the word "and" misspelled "nd" on page 208 eight lines from the bottom.

The plot it is summed up in this piece of pre publicity for the new 'Dorian' movie due to hit screens on 11 September 2009 - 'A corrupt young man somehow keeps his youthful beauty eternally, but a special painting gradually reveals his inner ugliness to all.' It stars Colin Firth as Lord Henry Wotton, the aristocrat who corrupts Gray and one Ben Barnes as the beautiful Dorian doomed in the Faustian pact. Apparently it is being done as a horror flick. It has been filmed several times notably the 1945 movie with George Sanders as Wotton --a b/w fim that bursts into Technicolor whenever the portrait is shown in close-up (as I recall.) 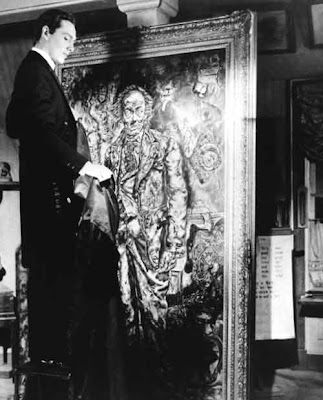 VALUE? The book has made over £25000 in auction inscribed. In 2006 a copy inscribed to Lady Dorothy Nevill (Sotheby's, July 13) made £22,000 (then $40,480) without the premium. The book is in Stuart Mason's bibliography as item 328. This copy varied from Mason in that there was a full stop after Dorian in the title and there is no final blank. Possibly an early issue of the first issue or a one-off printer's error. Lady Dorothy Nevill (1826 - 1913) was something of a grande dame, friend of Whistler and Disraeli and as a horticulturalist she is known to have supplied Charles Darwin with rare plants for his researches. She wrote four books of her memoirs ('Under Five Reigns' etc.,) some of which are still asked for but none of which are valuable.

The 1891 signed issue of 250 copies seldom makes less than £5000 in auction and dealers tend to want in excess of £8000 for it, even rebound. The regular edition is hard to find for less than £1500 unless in lousy condition; it has shown up wearing a green oil cloth dust jacket which added much value. The Lippincott magazine edition although considerably shorter than the book can make over a £1000 if decent and nearly a $1000 if a bit shabby. We sold an embarasssingly bad one (all faults shown) on Ebay in 2006 for a gratifying $550. They may be cheapskates and bottom feeders over there, but they are at least tolerant of a book in shagged out condition. Wilde prices shot up noticeably in the late 1990s and have remained high and may have now levelled off. The new movie might bump start Oscar prices once more.

TRIVIA. In 1943 Ivan Albright was commissioned to create the title painting for Albert Lewin's film adaptation of Oscar Wilde's The Picture of Dorian Gray which came out in 1945. His realistic, but exaggerated, depictions of decay and corruption made him very well suited to undertake such a project. His brother was chosen to do the original uncorrupted painting of Gray, but the painting used on the film was from Henrique Medina. Ivan made the changes in the painting during the film. This original painting currently resides in the Art Institute of Chicago. (Thank you Wikipedia)

British smack pack novelist, the gifted and amusing Will Self, wrote a modern version recasting Dorian as a 1990s Zeitgeist figure -druggery, buggery, thuggery, cruelty, betrayal, disease and all the newer nastiness--the New Yorker said it was '...as if Nancy Mitford and Johnny Rotten had decided to collaborate.' Lord Henry, a deeply unpleasant cock, was said to be based on a London figure, probably less than happy in this role. The book was received glumly by most reviewers. The CD, read by Self himself, is very good for a longish car journey.

It is generally assumed that Oscar's Lord Henry was based on Lord Ronald Gower a sculptor and known homosexual of the time. He sued a paper that mentioned this and when the Prince of Wales sent him a letter accusing him of being "a member of an association for unnatural practices", Gower wrote an angry reply along the lines of 'How very dare you!' John Addington Symonds, who stayed with him once, stated that Gower "saturates ones spirit in Urningthum of the rankest most diabolical kind." 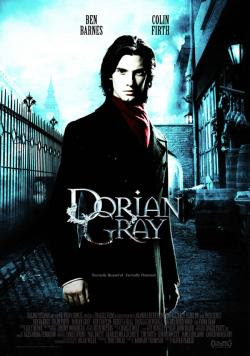 Will Self did a good job with Dorian-- most reviewers lead such bland and unadventurous lives that they did not know what the fuck he was on about.