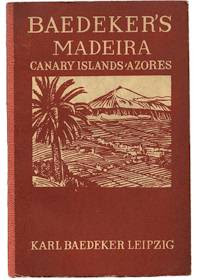 'Representatives of most of the hotels come on board and will (for a fee) see to the landing of the luggage. The custom house is near the Cais and the officials are normally very lenient to tourists. Passengers who have not booked rooms should send their luggage to the custom house, land and choose their hotel, and instruct the hotel porter to collect their luggage...*Reid's an hotel de luxe situated on a basalt cliff and commanding fine views, with restaurant (dancing), tennis courts, bathing place and small swimming pool (lift) R 155, L 8, D 10...' (landing at Madeira)

TRAVEL GUIDES
A wonderful book to find. Not to be confused with the 1934 German language edition which is still valuable but relatively common. The clue is it doesn't look like the familiar blood red soft cloth fat little handbooks, more like a small slim paperback - but the cover is the same shade of red. It is worth so much you could actually pack it in a case and set off to Madeira with it, even take in the lost isles of Atlantis (o/w known as the Azores.) Sell it on return to finance the trip.

I used an old Baedeker in Venice a few years back and not much had changed. For many parts of the world, however, they represent life when, as Waugh put it, 'the going was good.' Looking at KB's Madeira there would now be a greater emphasis on the now highly touristed Canary Islands. Fuerteventura gets you half a page ('most of the island is rough pasture and is grazed mostly by camels') and in Lanzarote, often known as Lanzagrotty, camels abound, a decent white wine is produced and motor cars may be hired to get to Yaiza, where a guide will take you in 3-4 hours to the top of the Montanas del Fuego. That's about it. Things had changed when in this century the unhinged genius Houellebecq wrote of his holiday on the volcanic isle - basically a Rioja fuelled shag-quest. The lovely Canary sland of Gomera, where natives still communicated with 'the old whistling language', ( Silbo) is described as mainly agricultural. Only in the last decade have they put in an airport.

Our copy is catalogued thus:

'...Small 8vo. pp xx, 128. 17 maps, 6 town plans. Original publisher's red illustrated thin card wraps with lighter red linen spine. Sound vg copy with slight handling wear ... Very decent acceptable example of the very rare (some say the rarest) Baedeker. Most copies were said to have been destroyed on a bombing raid on Leipzig in 1945, a few got to the Baedeker's London agents Allen and Unwin and a few to Scribner's in New York just before the war.' £1100.'

The only other time I have had this book was when we cleared 10,000 books from the offices of Allen and Unwin. There were two. We came out top in a 'private treaty' sale organised by Sotheby's. Publisher's file copies are the holy grail although in the case of A & U they kept back all the books of their star author and cash cow JRR Tolkien (also Arthur Waley and Bertrand Russell.)

VALUE? In an piece in the New Yorker 20 years ago they wrote - '... Bernard J. Shapero, the London

OUTLOOK. Probably healthier than most, Baedekers are not really tied to the book market and are collected across the board and in many countries and in several languages. As late as 2005 a man touted a box full of clean Baedekers around the Bay Area looking for buyers, he found none until he got to Moe's - take heart, they can go unnoticed.
Posted by Bookride at 2/24/2009

Graham Robb points out in his great Discovery of France that the Michelin guides were needed with the introduction of the car: Parisians who stopped in much of rural France and asked directions in French just wouldn't be understood: indeed might be in actual danger.

Cartographers were being attacked and even murdered in the 19th-century Massif Central by peasants who belonged to a different, ancient - and nonFrench - world.

Will look out for the Madeira Baedeker!