"What a history of human excesses a second-hand book-shop is! As you 'browse' there– personally I can't abide that word, for to my mind book-lovers are more like hawks and vultures than sheep, but of course if its use encourages poor devils to glance through books that they have no hope of buying, long may the word remain!–you seem to grow aware what a miracle it was when second-hand book-shops were first invented. Women prefer libraries, free or otherwise, but it too often happens that the books an ordinary man wants are on the 'forbidden shelves'. But there is no censorship in a second-hand book-shop. Every good bookseller is a multiple-personality, containing all the extremes of human feeling. He is an ascetic hermit, he is an erotic immoralist, he is a Papist, he is a Quaker, he is a communist, he is an anarchist, he is a savage iconoclast, he is a passionate worshipper of idols. Though books, as Milton says, may be the embalming of mighty spirits, they are also the resurrection of rebellious, reactionary, fantastical and wicked spirits! In books dwell all the demons and all the angels of the human mind.

It is for this reason that a bookshop--especially a second-hand bookshop--is an arsenal of explosives, an armoury of revolutions, an opium den of reactions. And just because books are the repository of all the redemptions and damnations, all the sanities and insanities, of the divine anarchy of the soul, they are still, as they have always been, an object of suspicion to every kind of ruling authority.

In a second-hand bookshop are the horns of the altarwhere all the outlawed thoughts of humanity can takerefuge! Here, like desperate bandits, hide all the reckless progeny of our wild, dark, self-lacerating hearts. A bookshop is a powder-magazine, a dynamite-shed, a drug store of poisons, a bar of intoxicants, a den of opiates, an island of sirens. 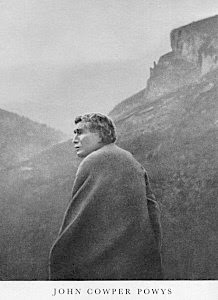 Of all the "houses of ill fame" which a tyrant, a bureaucrat, a propagandist, a moralist, a champion of law and order, an advocate of keeping people ignorant for their own good, hurries past with averted eyes or threatens with his minions, a bookshop is the most flagrant.
[Adapted by the great old Holland Park bookseller Peter Eaton in the late 1960s for a Book-mark ('Old Books Bought' added) from essays of J.C. Powys in his 1938 work 'Enjoyment of Literature.']

More to follow including the spicier climactic end of the rant omitted (for reasons of decency, length and commerce.) It is possible that this bookmark lead to the call of a lifetime. Watch this space.
Posted by Bookride at 2/09/2009