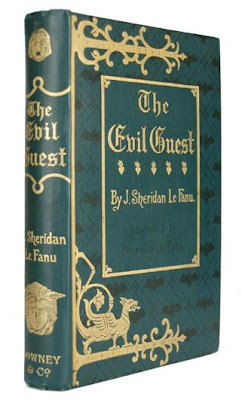 Idly reading Colin Wilson's "The Strength to Dream' this morning I came across his piece on Sheridan Le Fanu. Talking of dreams, I have long dreamed of finding one of his 3 deckers, the nearest I have got to this recently was finding in an island bookshop, practically mint, a first of his posthumous 'Evil Guest' which, when I got it home, sold like a bullet for a monkey (£500).

Some of his 3 deckers can go for the price of a new (and loaded) Lexus. Colin writes that Le Fanu is the only great writer of the supernatural that the UK has ever produced and that his 'Green Tea' is the most convincing ghost story ever written. The curious thing is that Le Fanu actually collected ghost stories himself. I fantasise that somehow the collection stayed together and is to be found in a huge trunk, unclaimed in a Dublin furniture repository. One day, a mere 136 years after its owners demise, they open it, check on Google and email me that it needs shifting a-sap 'for a fair and reasonable price.' Madness.

The great Colin writes that Le Fanu '... spent the day indoors, emerging in the late afternoon to wander round second hand bookshops. looking for ghost stories...' The basis of this is most likely to be A.P. Graves 'A Memoir of Joseph Sheridan Le Fanu.' Graves wrote that after Le Fanu's beloved wife's death he entirely vanished from Dublin society -

'... so entirely that Dublin, always ready with a nickname, dubbed him ‘The Invisible Prince;’ and indeed he was for long almost invisible, except to his family and most familiar friends, unless at odd hours of the evening, when he might occasionally be seen stealing, like the ghost of his former self, between his newspaper office and his home in Merrion Square; sometimes, too, he was to be encountered in an old out-of-the-way bookshop poring over some rare black letter Astrology or Demonology.

To one of these old bookshops he was at one time a pretty frequent visitor, and the bookseller relates how he used to come in and ask with his peculiarly pleasant voice and smile, ‘Any more ghost stories for me, Mr. ——-?’ and how, on a fresh one being handed to him, he would seldom leave the shop until he had looked it through. This taste for the supernatural seems to have grown upon him after his wife’s death, and influenced him so deeply that, had he not been possessed of a deal of shrewd common sense, there might have been danger of his embracing some of the visionary doctrines in which he was so learned. But no! even Spiritualism, to which not a few of his brother novelists succumbed, whilst affording congenial material for our artist of the superhuman to work upon, did not escape his severest satire...'