On Collecting Books by Tramps 2 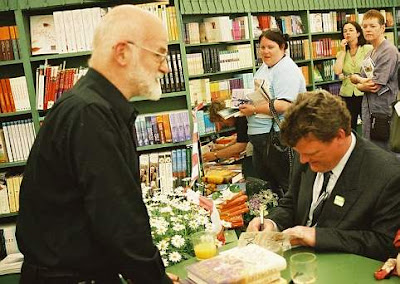 Second and final part of a guest blog by R.M. Healey. No puns about 'came to greeff' by the way, and God Bless the King of Hay for giving the man a square meal. Take it away Robin....

The Canadian Paul Potts is linked to Gawsworth in some people's eyes. Both slept alfresco, though Potts was a lot shabbier and smellier. Friends used to speak of the Potts stink , which accompanied him wherever he went. Of his three or so books Dante Called You Beatrice, which I have mentally subtitled ' the longest whinge in literary history ' ( OK, perhaps Hazlitt's Liber Amoris is another contender ) is the best known. The dozen copies of the very common Readers Union edition in ABE all fetch around £3, but some joker has priced his at £14. Instead of a Sonnet is more difficult to find and a signed copy for £39 in ABE is probably worth a punt.

Both Potts and Gawsworth came to mind quite recently when I thought I spied another homeless writer examining some of the bargain book tables in Cecil Court. I wish I’d hailed him, but I wasn’t sure, and to save possible embarrassment walked away. Francois Greeff was someone I’d interviewed three years before for Mensa Magazine,but for some reason the editor had spiked the piece. But Greeff is an interesting character. After leaving South Africa, where he’d witnessed a close relative being shot in fron of him, he’d escaped for his own physical and mental health to England and after years of living rough ( often is his car ) from Cornwall to Bournemouth, but mainly in London, he finally settled down and started a course at Kingston University, which is where I interviewed him.

If homeless Colin Wilson wrote some of his The Outsider in libraries Greeff preferred the various day centres for the homeless dotted around London. Here, he would grab his chance to tap out his first book , The Hidden Code of Cryptic Crosswords, on the house computer,saving the data onto a floppy. He would then seek out a sleeping place. He shared Wilson’s liking for Hampstead Heath.

Problems with the computers in the different day centres drove Greeff ‘scatty’. But at length the book was complete and not long afterwards Foulsham brought it out. Greeff then borrowed twelve pounds to set up a website to promote his magnum opus and the praise he receive from grateful readers prompted him to travel to Hay to sell his book at the Festival. It was while he was sleeping under a fir tree near the town's electricity sub station that he met someone who introduced him to ‘ King ‘ Richard Booth, who invited him to dinner.

You can buy a copy of Greeff's debut paperback for a mere $1 on ABE, but the same site has another at $27.78. (Copies on Amazon UK at 1 penny but also at a stratospheric £111 with Galaxy Books. Ed.) A one hit wonder ? . Well perhaps, but my money is on Greeff writing his memoirs, which should be as racy and as embitterd as Potts '. So what that his debut volume was a book on crosswords. H.G.Wells's first book was a biology textbook.

Our pics shows a suited Francois signing his book at The Hay festival for newly knighted Sir Terry Pratchett, also for 2 fans. Insert shows Lord Bragg, sadly uncollected as far as I know. 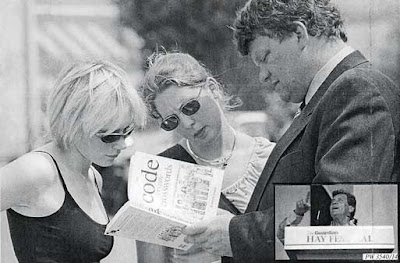 Melvin Bragg not collected. You jest. He was the first winner of The Literary Review's Bad Sex in Fiction Award in 1993 for A Time to Dance and anyone collecting that list has to have it. Luckily it is easily found. Other winners include 2004: Tom Wolfe, I Am Charlotte Simmons
2005: Giles Coren, Winkler
2006: Iain Hollingshead, Twenty Something
2007: Norman Mailer, The Castle in the Forest
2008: Rachel Johnson, Shire Hell and also last year John Updike won a Lifetime Achievement Award. His very name has become rhyming slang for sex--a Melvin Bragg = a shag.

Sorry, the last two posts strike me as complete crap. Guest blogging is rubbish and not why we read you. Please return to your usual postings asap -- they are inspiring and fab.
Thanks XX

Dude you have a most excellent guest blogdude there - more please. The critic is way offbeam. Ricky Pa

There must be countless tramps who can't get publishing deals. Classism is rife in the industry.

All very interesting posts anyway! Dunno what the critic is getting all het up about.

Re complete crap comment--obviously I don't agree but thanks for the greatly cheering comment on my regular stuff. Robin may do some more soon--generally he has been received v well but mostly it will be moi--trouble is I have to price books with a pencil and rubber leaving less time for blogscribbling. Sic transit gloria Mundi (or Gloria was sick in the Transit Monday)

Thank you so much for the review. I thoroughly enjoyed Francois book, and trust this will not be his only. I find his life story very moving. There are so many amazing people out there who have fallen through the cracks, and we are just too busy to care.