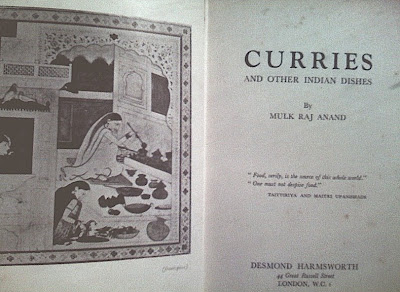 COOKERY
This is a book that I used to see in almost any respectable cookery collection- it would go for less than £10 and a little more if nice in jacket because it was, after all, an early work by the mildly collected Indian writer. Now all is changed; at present there are only 5 copies online priced between £50 and £150, the latter price, as always, for the poorest copy ('standard used condition.')

An early work on the subject. Indian restaurants were rare in England in the 1930s. The only one I can trace is the still extant Veeraswamy's (established in 1926 off Regent Street 'by the great grandson of an English General, and an Indian princess.') A customer recalls going there in the 1940s when it was full of Colonel Blimps and an electric Punka was in operation. A current photo of its interior (below) reveals an opulent and sedate dining area, not suitable for poppadum frenzy or vindaloo excess. In America Indian restaurants were uncommon until the 1980s. I recall that there was not a single Indian curry to be had in Los Angeles in 1975; there may be now as may as a 100 such restaurants in the city and the suburbs of L.A.

Our author gives the names of two London suppliers of all the ingredients used in the book - Stembridge in Cecil Court (now a great book street) and C.A. Naidu in Lexington Street, Soho. Anand begins with a tribute to that grand man 'Uncle' Norman Douglas:-

'...with that subtle irony and happy wit characteristic of him, Mr. Norman Douglas once declared that "Curry is India's greatest contribution to mankind." Those whose lucky star has bought them under the spell of Mr. Douglas will understand the sense in which that epigram is true. I laughed heartily when I read the statement...'

'...Curries with their vast partitioned platter of curious condiments to lackey them, speak for themselves. They sting like serpents, stimulate like strychnine; they are subtle, sensual like Chinese courtesans, sublime and sacred, inscrutably inspiring and intelligently illuminating, like Cambodian carvings.'

In the matter of the deadly poison strychnine, which the Great Beast appears to have imbibed, Wikipedia notes 'small doses of strychnine were once used in medications as a stimulant, a laxative and as a treatment for other stomach ailments...' 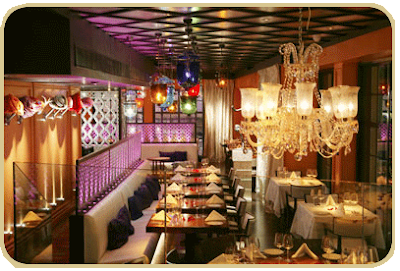 Here is a simple recipe from this interesting book:-

Carefully pick the stones out of the dal and soak for about an hour in a panful of cold water.
Put it to boil in a panful of boiled water. Sprinkle in some salt and turmeric and stir.
When the lentils are tender, fry the sliced onion in melted butter with black and red pepper in a different pan. Pour this fried mixture into the pan containing the dal to the consistency of porridge over a gentle heat. Take care while putting in the butter to keep the lid partly on so that the liquid does not fly back to your face and hands.

A simple dal that might be improved with frying a small amount of cumin seeds and some chopped garlic. The orange dal needs no soaking, but some lentils require much longer than an hour and stones can still be found. To be continued with a consideration of other curry book values including the 'Glasgow Good Curry Guide' from 1988 priced at a spicy £400...
Posted by Bookride at 4/23/2009