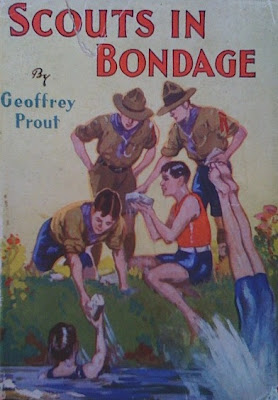 JUVENILE FICTION / BIZARRE BOOKS
Wandering through a local seaside down this Easter afternoon I spotted this excellent book in the window of a second hand bookshop. Knowing the uncanny canniness of the owner I was slightly worried about buying the book but a £20 note was exchanged. The internet reveals no copy at less than £100, several copies around £200 and no copies in dust jacket. Result! Time for punching the air etc., Whether the book ever sells for significant sums is another matter. The book has no real use except to display in shop windows and face out on a shelf for a good, but brief laugh - and therefore in these glum times it may not necessarily translate into further folding money.

It is probably the ultimate 'bizarre' book title. There are two books about strange or inappropriately titled called 'Scouts in Bondage' and the book is featured on the cover of Russell Ash and Brian Lake's magisterial 'Bizarre Books.' Geoffrey Prout was also author of 'Trawler

Boy Dick', also worthy of a chuckle. I am indebted to blogster Mister Roy ('...raised by wolves on waste ground in Portslade') for a summary of the plot.

A professor (who 'wore an old quilted black-satin dinner-jacket and a skullcap with a tassel on it'...) engages the Scouts to help dig up remains of a ruined chapel, seeking blocks of masonry with inscriptions. Assembled together these reveal the location of a secret treasure, actually a document which restores the rightful owners to the local mansion. Along the way, various lower-class 'wasters', 'hooligans' and even 'hobble-di-hoys' attempt to thwart them. Punches are thrown, rivers forged, cars crashed, tables full of pies demolished - and all is well in the end. It is an enchanting period piece. The text is punctuated with cries of 'Crumbs!', 'By Jingo!', Right-o!' and 'Well, I'm blest!' Prout was a Scoutmaster apparently and his enthusiasm for the movement shines through every page - it is in effect an advertisement for Scouting.

OUTLOOK. Quite good, the taste for whimsy and bizarrery is probably growing in a post Python world, with the occasional wag willing to put money on the table for the stuff. There is probably a ceiling on values but the amount of bizarre, silly and zany titles is almost limitless. I heard sometime ago of someone selling a largish collection of these titles for a significant but not life-changing sum... Meanwhile on Amazon there is a jacketless copy in 'standard used condition' (whatever that is) at $265 ('LOW ITEM PRICE'.) The joke of the title is lost on Amazon's recommendation robot who suggests some DVDS -'... Customers Viewing This Page May Be Interested in Kidnapped Gagged Women or Beautiful Women Bound and Gagged!
Posted by Bookride at 4/10/2009


"The Thames is a fake, of course."
"By Jingo, Professor, what makes you think that?"
"It's full of crocodiles and hippopotami. The real one has obviously been replaced with atributary of the Congo."
"And where is the real one then?"
"Probably hidden in the Volga."
By Jove; you mean the Bolshevists have it in their power?"
"I'm afraid so, boys. They are replacing the Eton Boat Song with the Volga Boat Song."

Jarndyce over at Great Russell Street sells some fab cards featuring the dust wrappers of classics such as 'Wrestling for Gay Guys', 'How to Abandon Ship' and (my favourite) 'Jokes Cracked by Lord Aberdeen'

Many thanks to Mr Roy for the synopsis of SIB!