Beyond a joke...a price too far

This continues the mild rant about pricing in the last post which proved oddly popular. Recently I bought a book on the web about the Philolegos - a collection of very old jokes translated from the Latin and Greek. They date from around 300 B.C. It is basically a thesis and translation with addenda published by Gieben in Amsterdam in 1983. One of the ancient contributors, Philistion, a 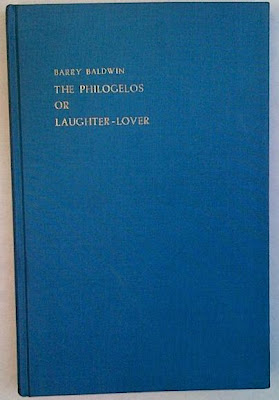 mime artist and comedian working the stadiums in the time of Augustus is supposed to have died laughing. I found the only copy online whose price was not a joke and paid a slightly ambitious £30 for it. Having read most of it I put on a pile to sell but looked it up again and now found only 3 copies, one at a £100, one on Amazon Canada (haven of awesome pricing) at £190 and one with a German dealer at a mammoth, breathtaking £590. Thus I might sell mine at £60, representing a decent return on my money after 6 weeks. I suppose I shouldn't knock the overpricer as it means that I can come in way under them and appear strangely reasonable (even though I have a nasty feeling it is actually worth about £20.)

These extremely old jokes (some say the oldest in the world) are not exactly ribticklers, taste in humour having changed over time. Take this one (which has been used to date the collection)-

"Whilst attending the games held in honour of the millennium of the city of Rome, an egghead came across a defeated athlete in tears. 'Cheer up' he consoled him, 'I bet you'll win at the next millennial games.' "

An egghead, by the way, is the butt of many jokes and appears to have been a current type- the 'scholasticus' -a sort of vacuous pedant. Here is another egghead joke on the subject of book buying:

" A witty young egghead sold his books when short of money. He then wrote to his father, 'Congratulate me, father, I am already making money from my studies!' "

R.o.t.f.l. (as they used to say.) There are a whole series of jokes about people from the Greek city of Abdera whose citizens were apparently distinguished by their stupidity. Here is one of the better Abderite jokes:

"Seeing a eunuch chatting with a woman, an Abderite asked him if she was his wife. The eunuch replied that people like him could not have wives. 'Ah then she must be your daughter.' "

There are freakish circumstances in which vastly overpriced books can sell. A friend deep in the country had a call from a comic writer in London who needed a book for a sketch. It was Baron von Gagern's deathless work on wanking- 'The Problem of Onanism' (Mercier Press Cork 1955). Because the book amused him he quoted the guy £300 and 2 hours later a courier appeared with a cheque and shot off back to the metropolitan studios with the slim volume. It can be obtained fairly easily for £10. I sold a cookbook to a guy who needed it for a present for his host in Thailand--the man sent a taxi from Birmingham to London to collect it, pushing the £50 price to at least £300. Other books can get unrealistic prices because they are bought as leaving presents, inducements, rewards, for purposes of romance or seduction or because the book is needed urgently or the possession of it will make the buyer lots of money or even clinch a deal.


One of the explanations for absurd prices is that at the time the book was put up it was the only copy available thus giving full rein to the dreams, fantasies and fears of the pricer. An unsaleable collection of vanity published verse printed in Stoke Poges ('Songs at Sunset') in 1961 can thus get priced at £600 because the pricer somehow stopped at that figure in their head ('if they will pay £500, surely they will pay £600' etc.,) Other sellers then come in at £400 and £300--the blind leading the blind. Real value £3.50- a price at which it still might not sell. It's a mad world my masters...
Posted by Bookride at 7/05/2009

Mary Beard wrote on the collection in the TLS in February -

Weird to think that so many of our jokes seem to originate there, though they must of course go back even further.

Beard points out that Cicero could use Abdrea as shorthand about Rome 'It's all Abdera here' and his auditors would get the point.

As for price and value, the book trade has always been a haven for Oscar Wilde's cynics - men who know the price of everything and the value of nothing. I have heard that dealers who put up astronomical prices are hoping for random internet buyers (with loadsamoney) will come to them first and think that must be the price. That's always happened of course.

According to the publisher http://www.brill.nl/uploadedFiles/481.pdf it's available at 30 Euros or 51 US dollars, so you could keep advertising it at sixty pounds and be always sure of a profit...

as many online dealers use an automated system to continually reduce their books to become the lowest available copy (thereby being first listed on amazon etc) i have heard tell that if you are seeking a scarce (but not valuable or particularly sought after) title yourself then you can list your own imaginary copy somewhere below the posted prices and their real books will, within a short time, be reduced to a penny below the price you have selected. of course it won't work with genuinely rare or desired books as somebody else will immediately try to buy yr phantom book but if you are after an oddity (academic text book, ancient knitting pattern etc etc etc) that is vastly over priced as it is the only copy, before you buckle try your own phantom listing and watch the price fall...

Good point anon and I guess folk do it because those repricing systems are robotic (although I imagine they can be set to reduce no more than, say, 20% or to give notice of dramatic changes.)

The other ruse which I am sure happens occasionally is a dealer with a good book, possibly the only copy, somehow lists it twice--once at an exorbitant price (under another name) and then at what appears by comparison to be a reasonable (although still hefty) price. Tricky stuff.

At the other extreme are the online dealers who overestimate the price sensitivity of a very abstruse and scarce scholarly book. I once had a university press book, the subject of which,as near as I could discern, was the cultural politics of air conditioning in Singapore. A short discount hardcover from the back of some university press list, probably published at $120 in an edition of 50 copies. The only other copy on line was priced at a whopping $9. As if a casual browser might pick up such a title as an impluse buy. The dealer perhaps envisioned such a buyer thinking: "You know, I never thought I'd be interested in the state of Singapore's air-conditioning, but for 9 bucks, what the hell, I'll give it a shot." The 3 people in the world who are interested in such a book, are really interested, and they will pay $100 or more. I believe I put my copy on for $120, waited 3 years and finally sold it.

Actually, Jared, I lived in Singapore in the late 1960s and early 1970s when many buildings were not air-conditioned and there was considerable debate over the merits and demerits of air-conditioning socially and individually. It's a generally interesting topic, in fact, as the more buildings there are that use air-conditioning, then the more uncomfortable the rest of the city and the builings that don't use air-conditioning become, so out of curiosity I and quite few other people would be interested in such a book at $9.00 but not at $100. On the other hand, while I might notice it in a bookshop and buy it out of curiosity I'd necer find it on the internet because I'd never think to look for it.